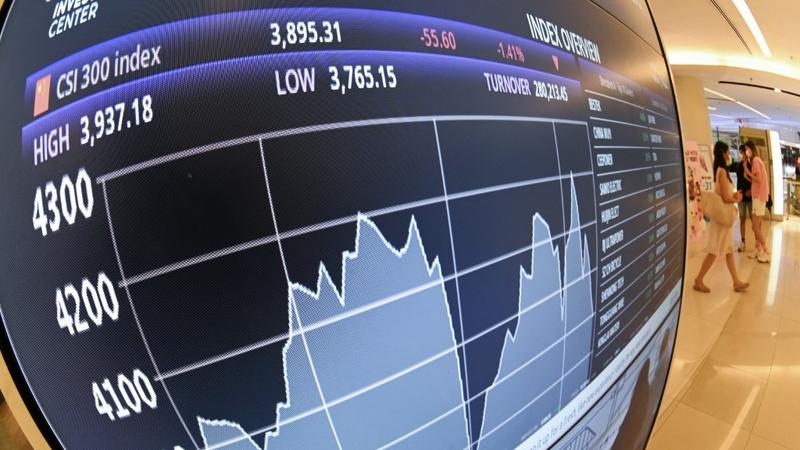 People wearing facemasks amid concerns over the spread of the novel coronavirus, walk past a stock market display board showing movements of the Shanghai stock exchange at a shopping mall in Bangkok on March 15, 2020. (ROMEO GACAD / AFP)

BEIJING - Chinese A-share market emerged as a champion globally in initial public offering (IPO) financing scale in the first half (H1) of 2022, according to data from financial information provider Wind.

In terms of funds raised, the Shanghai and Shenzhen stock exchanges ranked first and second respectively across the world during the period, accounting for nearly half of the global total, Wind data showed

In the first six months, the A-share market raised a total of 311.9 billion yuan (about $46.5 billion) via IPO, up 46 percent from a year ago and topping the global chart for financing scale.

In terms of funds raised, the Shanghai and Shenzhen stock exchanges ranked first and second respectively across the world during the period, accounting for nearly half of the global total, Wind data showed.

The boom in the A-share market stood in contrast with the global financial market, which has cooled off after touching new highs in both the number of IPOs and financing scale last year.

Enterprises in emerging sectors of strategic importance, including information technology and high-end equipment manufacturing, dominated the IPO list, as they made up over 90 percent of the firms floated on the two bourses during the period.

Despite uncertainties ahead, industry insiders remain optimistic about the prospects of the A-share market in the second half of the year.

With the epidemic under control and pro-growth fiscal and monetary policies at work, Chinese economy is expected to sustain its sound momentum and enterprises will be able to enjoy a more favorable financing environment, said Louis Lau, partner of Capital Markets Advisory Group of KPMG China.