Homes for crops in new sales push by developers 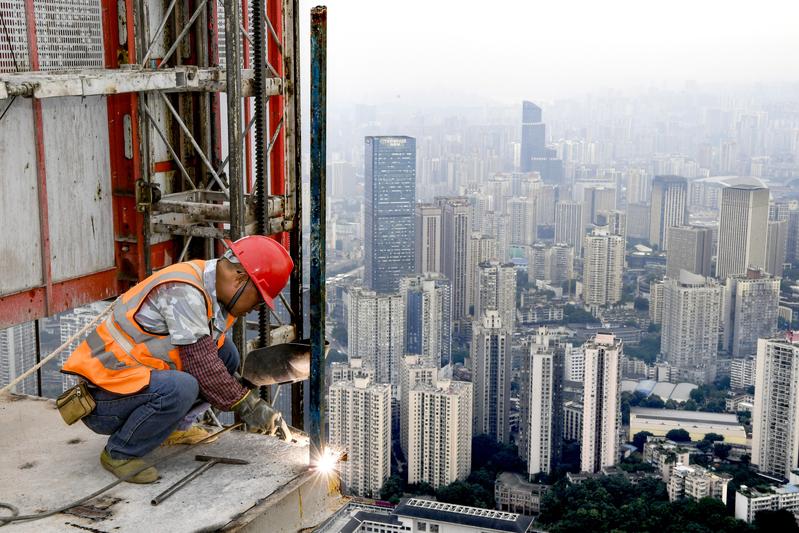 A worker at a property construction site in Chongqing. (WANG QUANCHAO / XINHUA)

Chinese realty developers are coming up with unusual promotional campaigns to revive home sales and mitigate pressure from excess housing inventory amid a market slump.

Seazen Holdings Co Ltd announced on Tuesday it will offer up to 100,000 yuan ($14,920) to pay for farmers' watermelons to encourage them to buy apartments in Nanjing, Jiangsu province.

A few days ago, Central China Real Estate Ltd offered farmers as much as 160,000 yuan to buy their wheat. The money can be used toward down payments for apartments that the company developed in Shangqiu, Henan province.

The company also offered to buy garlic from growers to encourage them to buy apartments in Kaifeng, another city in Henan.

The novel promotions coincide with a slowing economy, which is more obvious in third- and fourth-tier cities, experts said.

Yan Yuejin, research director at the E-House China R&D Institute, a Shanghai-based agency that mainly studies realty, attributed the overall decline in housing demand mainly to the market sluggishness of the past few years in third- and fourth-tier cities, following the halt to a policy of financially compensating residents whose property was expropriated by the authorities concerned.

A report from the Beike Research Institute said the interest rates on home loans in third- and fourth-tier cities fell, but that still did not help revive home sales in the first half of this year.

Yu Liang, chairman of developer Vanke, said at a recent meeting with company shareholders that month-on-month sales growth of housing in June rose on the back of policies, recovering demand and a relatively low sales volume last year, indicating the realty market may have hit bottom in June.

Going forward, China's housing market may see a recovery instead of a rebound, Yu said.

Yan of E-House said novel promotions could prove a win-win for both sellers and homebuyers. Such promotions not only help developers to boost sales but also boost farmer incomes as offers from some realty developers are higher than the average market price of the crops.

Guo Yi, a lead analyst of the Heshuo Real Estate Research Institute, said persuading farmers, especially those who are seeking to give their children better education, to buy homes in third- and fourth-tier cities, and even on the outskirts of second-tier cities, may be an effective way to boost local housing sales to some extent.

Compared with first- and second-tier cities, third- and fourth-tier cities appear to be less attractive to work and live in, pressuring housing sales difficult. But there is a need for farmers from villages to buy houses in smaller cities. This is pushing developers to launch imaginative promotions aimed at farmers, to reduce the levels of housing inventory, said Zhang Bo, dean of the 58 Anjuke Institute, in a chat with media agency China Times.

However, it is necessary to ensure such promotions are not misused to circumvent government restrictions on lowering real estate prices beyond healthy levels, Yan said.