By He Qi and Cao Yin in Shanghai 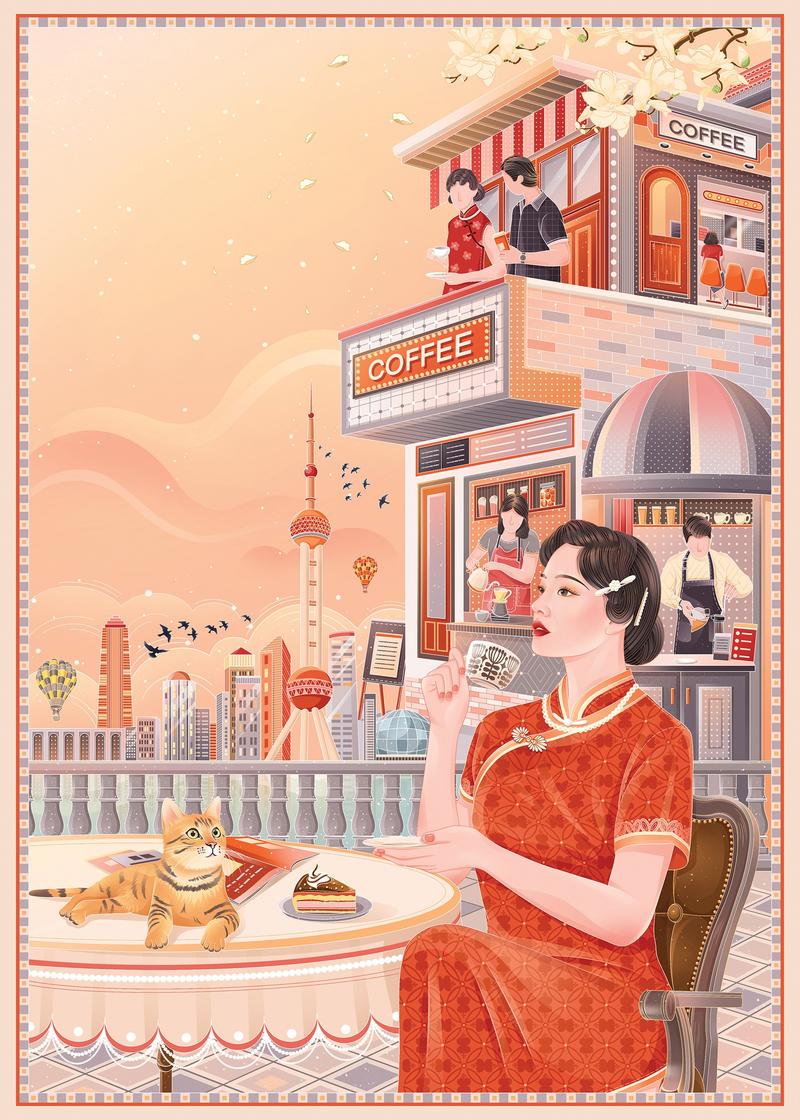 When sales of fresh coffee resumed on June 2 at Buna & Pate, a coffee shop in Shanghai’s Xuhui district, customers flocked to the business.

Several of them told the barista, “We don’t mind what type of beans you use, just as long as we can drink a cup of fresh coffee again right here, right now.”

Amid the aroma of fresh coffee beans, Xu Yihong, the shop’s manager, said, “It means a lot to me that we are able to provide service to many regular customers and coffee lovers once again.”

The independent business, which was launched in December, reopened when the city resumed most dine-in services on June 1, after being shut down for more than two months.

Su Xinyi, co-founder of specialty coffee shop Aloha on South Shaanxi Road, said numerous customers voiced relief at being able to drink on the premises again after the lockdown was lifted.

“Drinking coffee is a way of life in this city. Being able to enjoy a cup of fresh coffee gives people a sense of normalcy during these special times,” Su said.

During the lockdown, coffee was in high demand in Shanghai, which is home to some 8,000 cafes.

A report by China Central Television’s business channel said the city has the most coffee houses in the world.

On March 18, a coffee lover in Shanghai described on Sina Weibo how she heard a woman who had just been released from a temporary lockdown running into a store and yelling, “I need to buy coffee!”

The post, with the hashtag “Shanghai I need to buy coffee”, quickly went viral, attracting comments from coffee lovers across the city.

Yeast, on Yanqing Road in Xuhui district, came to the rescue of numerous coffee aficionados in the city, as it was one of the few coffee shops open for delivery services during the lockdown.

The business reopened on April 9, just eight days after Puxi, an area of Shanghai on the west bank of the Huangpu River, was placed under closed-loop management. 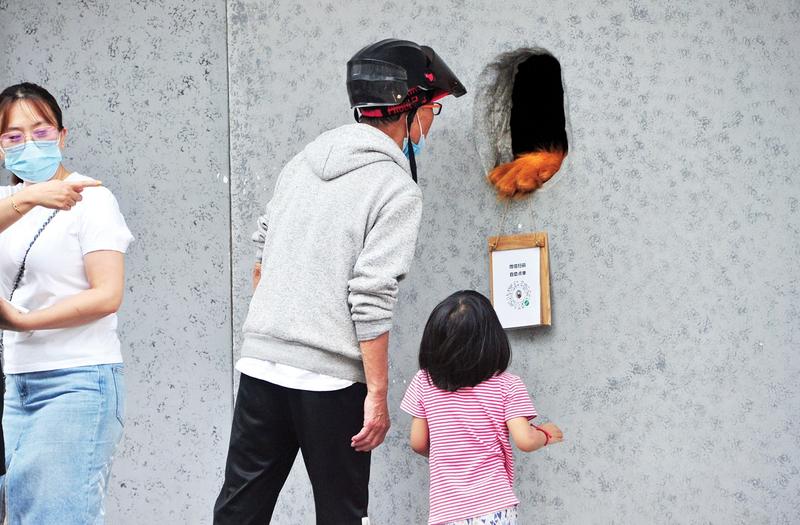 He Shanze, who owns the business, said: “I applied for the shop to reopen, as I wanted to survive financially. I didn’t know how long the lockdown would last, but I knew that I simply couldn’t stay home and wait.”

As the business offers quick meals and snacks, including sandwiches, and can ensure basic food supply, He’s application was quickly approved by the sub-district’s food and drug supervision bureau.

She and her husband moved from home to live in the shop, starting an online business during the lockdown.

Taking their stocks of raw materials and manpower into account, the couple decided to sell only snacks and three types of coffee — latte, Americano and cold brew — at the usual price. They initially told neighbors and regular customers living nearby that the business was reopening.

Much to He’s surprise, 157 online orders were received on the first day. Previously, the shop sold about 150 cups of coffee on weekdays and 200 cups during weekends.

A customer living about 10 kilometers from the business ordered 16 bottles of coffee one day last month, rewarding the deliveryman with a tip of more than 100 yuan ($15), in addition to paying the delivery fee.

“I felt so happy at the time,” He said. “I didn’t expect the demand for coffee to be so high and that people would be so supportive.”

After the first group of customers posted information and photos of the coffee on WeChat, more residents learned that business had resumed at Yeast, including those living about 20 km from the shop.

“Since we reopened, more than 1,500 new customers have contacted me through WeChat, expressing their desire to drink coffee and also their support for my business, which cheered me up,” He said.

She added that her husband was responsible for making the coffee, while she rode a motorcycle to deliver orders within 1 km of the business. 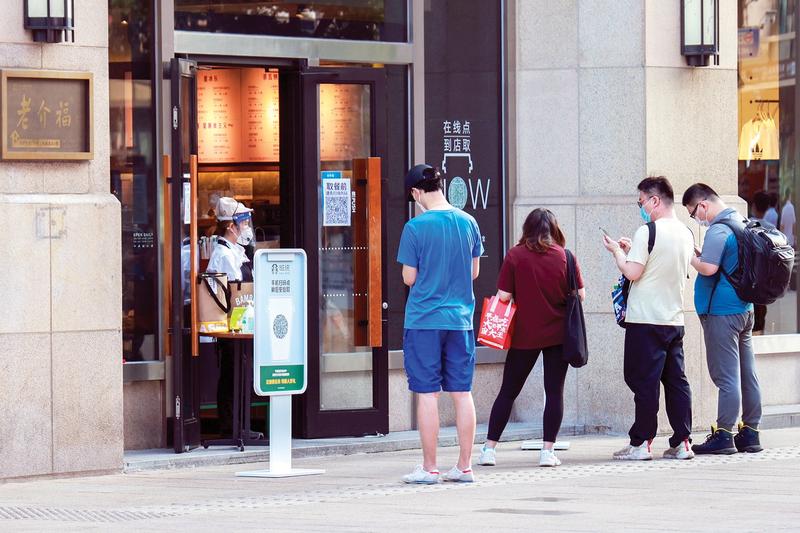 Customers use their phones to buy coffee outside a Starbucks branch in Shanghai on June 2. (PHOTO PROVIDED TO CHINA DAILY)

Manner Coffee, which originated in Shanghai in 2015 and has witnessed rapid expansion in recent years, has run online business on delivery platforms since March, while other coffee chains such as Seesaw and Tim Hortons offer community group purchases.

“As of the end of May, we have cooperated with more than 3,000 group purchase coordinators and served over 5,000 communities in the city. At peak times, 200 group-buying orders are placed per day,” Yin said.

On April 22, the business resumed sales of fresh coffee.

As of June 10, a total of 55 Seesaw offline stores had resumed business. Yin added that the overall number of takeout and delivery orders received was higher than the total before the closed-loop management system was put in place.

“Ordering a cup of coffee had become a daily ritual for most customers before the COVID-19 outbreak, but closed-loop management limited business, resulting in strong demand, as evidenced by the popularity of group purchases of on-site coffee and the coffee-related products we provide,” Yin added.

At Yeast, He and her husband sold about 150 cups of coffee a day during the lockdown, “which was better than we expected, but we also faced increased costs,” she said.

For example, supplies of disposable bags, cups and cup lids were quickly exhausted.

Despite the rising cost of such items, the price of the coffee remained the same. “That’s my reward for coffee addicts, and it’s also my way of thanking those who supported my business during the outbreak,” He said.

Some cafe owners found new ways to survive as more residents made fresh coffee at home by ordering coffee beans. Selling store-roasted beans instead of drinks became a new retail strategy for storekeepers. 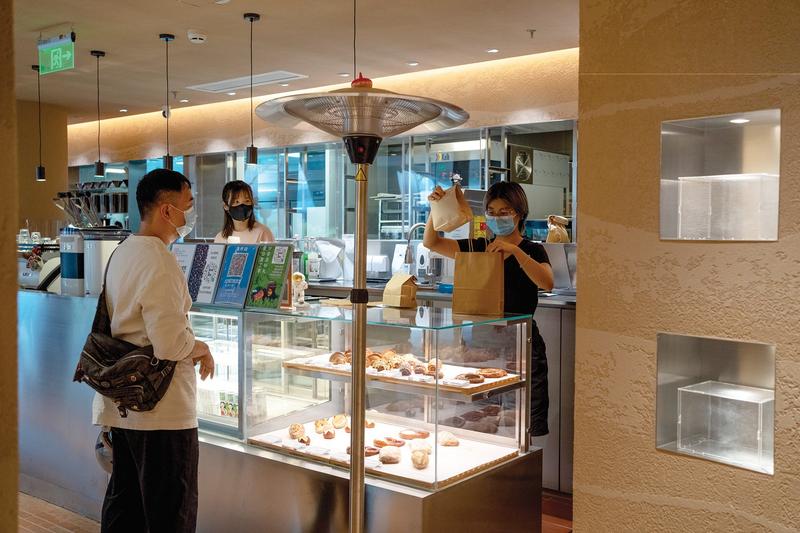 In the Buna & Pate WeChat group, the main talking point among customers was how to get a good homemade cup of coffee just like that produced by the business, which has been flooded with questions about coffee bean deliveries in recent months.

Xu, the manager, said: “During the lockdown, we received orders for coffee beans every day from customers, with each one worth 100 to 200 yuan. During the outbreak, we generated more revenue from coffee beans than from selling coffee.”

To help customers during the outbreak, Xu roasted beans and delivered these to clients. She also taught customers how to make quality coffee at home.

One client even asked if it was possible to use a garlic pounder to mash coffee beans.

Such initiatives helped the store survive the lockdown. “We are now also starting to sell bags of freshly roasted coffee beans and drip-bag coffee,” Xu said.

However, recent average turnover at the business was 50 percent down on that before the outbreak, as customer flow at the shopping center where the Buna & Pate outlet is located is not as high as before.

Xu said enthusiasm among customers and a rent exemption from the local government have eased pressure on the store to a certain extent and given her confidence for the future.

At the end of May, Shanghai authorities announced a 50-point action plan to fully assist enterprises to recover from the challenges posed by COVID-19 in recent months.

According to the plan, businesses in the catering, retail, tourism, civil aviation and transportation sectors, and small-, medium- and micro-sized enterprises, are entitled to postpone paying social insurance premiums and housing provident fund contributions to the end of this year, as well as benefiting from other exemptions and reductions in taxes and fees.

Xu said: “A cup of coffee involves a lot of people, from farmers in producing regions, to processing workers, transportation operators, equipment manufacturers, and baristas in cafes. I hope everyone can survive.”

After working for a coffee company for several years, He, from Yeast, resigned and opened her own cafe in Shanghai in 2020.

Before she settled on Yanqing Road, the native of Lanzhou, Gansu province, had considered several other cities as options for the business. “I finally chose Shanghai because I like the city, its pace of life and coffee culture,” she said. “Coffee here is not just a drink, it’s a way of life.”

Numerous cafes dot the cityscape in Shanghai, especially in busy areas, including Huaihai Road and Xujiahui. Nanjing Road West boasts 57 cafes serving coffee, the highest density of such businesses in the city, while on Ruijin Second Road in Huangpu district, there is a boutique coffee cafe every 20 meters. 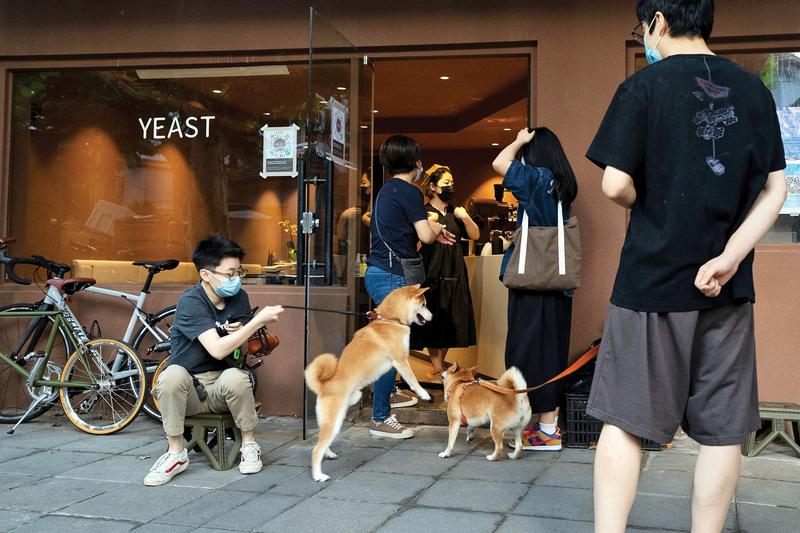 According to the Shanghai Coffee Consumption Index, there are far more cafes in the city than in New York and Tokyo. Covering an area of nearly 6,300 square kilometers, Shanghai boasts an average of 1.26 coffee shops per sq km.

The city not only attracts traditional coffee giants, such as Starbucks and Costa, but is also home to many new coffee chain brands, including Luckin and Manner. Blue Bottle Coffee, known as “the Apple of the coffee world”, recently chose Shanghai as the location for its first shop on the Chinese mainland.

Niche outlets such as Yeast are also developing their business in the city.

Comparing Yeast to a bridge that connects strangers, He likened the business to a “tribe”, where people with common hobbies and similar ideas get together to have fun and share their life stories.

“For example, the tent and sleeping bags I used to live in the shop were provided by one of my regular customers who loves camping,” she said. “We plan to go on a camping trip after the city fully recovers from the epidemic.”

She added that she chose the shop’s location because she wanted coffee to be part of life for local residents.

“For example, white-collar workers buy takeout coffee on their way to the office every morning, while neighbors chat with each other here after work,” she said.

“Yeast is a basic element that adds to the enjoyment of food, so I believe that coffee will do the same for our lives,” she added.

To welcome the coffee industry’s resurgence, more than 100 specialty cafes in Shanghai agreed to provide 50,000 cups of free coffee during the June 11-12 weekend.

The co-owner of the Gentle Maker coffee shop, who gave his name only as Don, said in a video clip produced by Shanghai WOW!, a high-end lifestyle media outlet, on the coffee industry, “We hope that people who like coffee will maintain their confidence in the industry.”

In the second week of June, dine-in services were again banned in most districts of Shanghai. Apart from some restaurants in the suburbs of Jinshan, Fengxian and Chongming, all other restaurants and cafes can only provide takeout service at present, according to the latest regulations.

Xu, from Buna & Pate, said, “It’s a pity that customers cannot dine on the premises for the time being.

“Many specialty cafes such as ours are not only a catering industry but also a service industry. We provide a sense of experience, in addition to meeting customers’ demands. This is one of the reasons many customers like to experience the store rather than buy beans and make coffee at home.”

Xu Liwen, a freelance writer, spends a lot of her time in cafes across Shanghai. “Being a coffee lover, I’m not only used to sipping cups of delicious coffee during the day — I also enjoy every minute of sitting in cafes,” the 29-year-old said.

“Working in coffee shops is inspirational. Some of my favorite seats in these shops are just like a corner of my living room or study. This special experience in a public space is vital to me. I can’t wait to spend my day in cafes after dine-in services resume.”

Xing Yi contributed to this story.