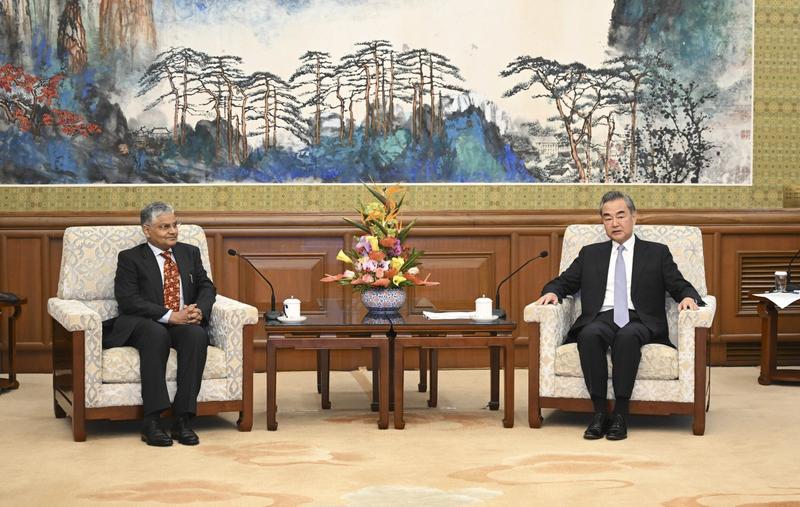 State Councilor and Foreign Minister Wang Yi said China's and India's common interests far outweigh their differences and the two countries should support rather than undermine each other, as he met with Pradeep Kumar Rawat, India's new ambassador to Beijing.

Wang noted that the two neighbors should put the border issue in an appropriate position within bilateral ties and seek solutions through dialogue and consultation. To date, China and India have held 15 rounds of Corps Commander-level talks on the border issue.

China and India should meet each other halfway so as to steer bilateral relations back to the track of stable and sound development at an early date, said Wang during the meeting, which took place on Wednesday.

He said the two sides should strengthen cooperation rather than guard against each other, and enhance mutual trust rather than be suspicious of each other.

China and India should also give full play to their traditional advantages in people-to-people and cultural exchanges, continuously expand mutually beneficial cooperation, and work together to create a better future for mankind, he added.

Wang Shida, deputy director of the Institute of South Asian Studies at the China Institutes of Contemporary International Relations, said healthy China-India relations help promote democracy in international relations and tackle global challenges as the relations concern the well-being of 2.8 billion people in both countries and whether the world can truly achieve justice, equality and harmony.

Speaking in an interview at the GLOBSEC Bratislava Forum, India's Minister of External Affairs Subrahmanyam Jaishankar slammed "Eurocentrism" and said his country is "perfectly" capable of managing its relations with China.

According to statistics from the General Administration of Customs, trade volume between China and India reached $125.66 billion last year, the first time that the number has exceeded $100 billion.

The meeting came ahead of the 14th BRICS Summit, which Wang said showed the two countries' cooperative posture to advance BRICS development.

Zhou Bo, a senior fellow at the Center for International Security and Strategy at Tsinghua University, said in an article that China and India should not let the border issue hinder the healthy development of bilateral ties, so as to uphold peace and tranquillity on the border as well as achieve common development.