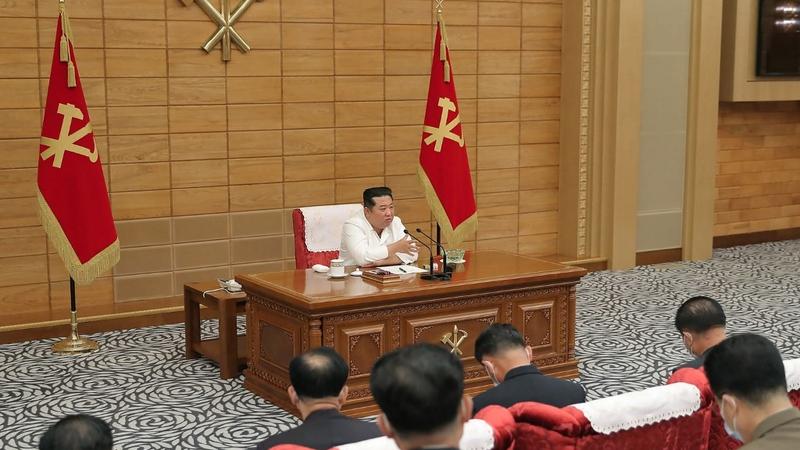 This picture taken and released on May 29, 2022 from DPRK's official Korean Central News Agency shows DPRK leader Kim Jong-un attending a meeting at the Workers' Party of Korea's Politburo at the headquarters of the party's Central Committee in Pyongyang. (STR / KCNA VIA KNS / AFP)

Kim made the remarks at the fifth enlarged plenary meeting of the party's eighth Central Committee, which ended on Friday.

Kim Jong-un said that the right to self-defense is an issue of defending sovereignty, clarifying once again the Party's invariable fighting principle of power for power and head-on contest

"The current security environment of the country is very serious and the surrounding situation carries a danger of being further aggravated. This urgently calls upon the DPRK to attain the goal of bolstering the national defense capability as soon as possible," Kim was quoted as saying.

Kim said that the right to self-defense is an issue of defending sovereignty, clarifying once again the Party's invariable fighting principle of power for power and head-on contest.

In his speech, Kim also talked about the current anti-epidemic campaign and underlined the need and urgency to strengthen the country's foundations for public health and speed up the building of the anti-epidemic capacity.

"He called for making an in-depth analysis and review of the evils and shortcomings revealed in every sector during the maximum emergency anti-epidemic work from a critical and developmental viewpoint and adjusting and reinforcing in a more scientific and revolutionary way the state work system to cope with the epidemic crisis," the report said.

According to the report, the government made a reshuffle at the meeting by dismissing or appointing some ministers, with Jon Sung-guk being appointed as vice-premier of the cabinet and Choe Son-hui as minister of foreign affairs.