In the fifth and final installment in our series on non-fungible tokens, Sakura Ip finds out how creators are working to improve the digital assets’ usefulness and longevity.

Tam Jai International, the parent company of a restaurant chain specializing in Yunnan rice noodles, and Dialogue in the Dark (HK) Foundation, a nonprofit organization promoting social inclusion through simulating life experiences of the visually impaired for the benefit of the sighted, have something in common: Both are newcomers to the NFT world. In recent months, the much-celebrated tokens went from being mostly rare, iconic collectibles to things of a more general interest — pervading different aspects of people’s everyday lives.

How did that happen?

Siu Yat, a Hong Kong-based entrepreneur, angel investor and founder of Hong Kong Cybercity — one of Asia’s first free webpages and email providers — points out that the key players in today’s tech industry, including Google, grew in stature and influence during the tech boom of the 1990s and early 2000s. “Right now, the decentralized web is at a stage roughly equivalent to where internet companies were in the late 1990s,” he adds.

Today, Siu is the co-founder and chairman of Animoca Brands, a $5.8 billion-valuated company that’s made more than 150 investments in Web3 and metaverse projects. Dubbed “Mr Metaverse” by the media, Siu is a frequent guest on webinars and other discussion forums on NFTs and the metaverse.

“We’re going from a situation where the operator owns everything, and licenses it to you for a fee, to all of us having the ability to own, irrevocably, the digital assets in our wallets,” Siu notes. “NFTs are the mechanism enabling digital property rights with confirmed digital ownership on a massive scale.”

Gamers are Siu’s ideal audience in this digital-asset revolution. “Gamers already have a relationship with their virtual goods: When a critical mass of gamers realizes that their relationship with virtual goods can be upgraded from the current rental model to one of ownership, that will be a major inflection point for the industry,” says Siu, a 2018 investor in Dapper Labs, the company behind CryptoKitties, an early blockchain game based on NFTs in the image of digital cats.

The Sandbox metaverse lets players build, own and monetize their gaming experiences on the ethereum blockchain. (PHOTO PROVIDED TO CHINA DAILY)

The system of digital ownership driving the popularity of NFTs was tested this March when, unable to renew their license with Formula One for the blockchain-based game F1 Delta Time, Animoca had to shut it down, just three years after launching. Players were invited to convert their F1 Delta Time NFTs into Race Pass NFTs of a corresponding rarity. The new assets can be used to stake and mint other NFTs in Animoca’s broader REVV Motorsport ecosystem. Holders will be able to stake their assets to earn from a reward pool of 20 million REVV tokens — about $538,000 at the time of writing.

“Everything that users purchased or otherwise obtained remains in players’ possession, and we are providing options for using old NFTs even after the closure of the game. This is only possible thanks to blockchain and true digital ownership,” says an Animoca Brands spokesperson.

“NFTs can be anything in the digital realm — this is why they’re one of the building blocks of the open metaverse,” Siu notes, adding that this is one of the factors driving up the value of NFTs in an otherwise volatile market.

“Currently, most people know NFTs as profile pictures or artwork, but don’t realize that an NFT can have utility — including the utility to generate cryptocurrency or other rewards. In the open metaverse, utility will determine the value of NFTs.”

Lee has spent around four hours a day growing his portfolio of rare NFTs since December. “I didn’t start with a huge amount of money but gradually started to explore more collections. It’s so addictive!” he enthuses.

He is not blind to the risk, however, admitting that the possibility of the NFT market collapsing is a worry. In the past, he had followed his gut and lost heavily — to the tune of HK$300,000 ($38,200, or around 13 ethers at the time). Today he goes for safer, “blue chip” choices, such as the collection his WhatsApp icon belongs to: Doodles, a series of 10,000 NFTs designed by Burnt Toast.

Lee spent $60,000 on his icon — his most expensive collectible to date. He thinks the investment will pay off, likening the series creators to The Walt Disney Co: “They make merchandise and events out of these characters. (NFT holders) will profit out of owning part of the intellectual property rights.”

Asia is embracing the global NFT trend, and Lee says he thinks Hong Kong has the potential to be a major NFT market. “You need a market where people have money, intellectual ability and an openness to embracing (new) ideas,” he says. 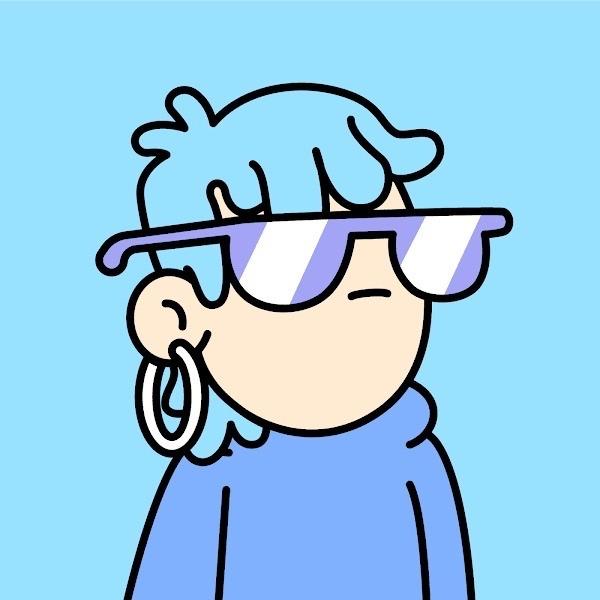 “We’re buying the potential of the NFT industry,” says Kimmy Wong, co-founder of Paititi, a Hong Kong-based, Cyberport startup. “NFTs will have more applications in the future, such as in game tokens, membership cards, or even concert ticketing to avoid scalping,” she continues.

In the meantime, Paititi has launched an NFT trading platform with localized features including Chinese-language support, aiming to establish a local community of NFT holders. Paititi is the name of a legendary, lost Inca city offering the possibility of riches — a clear reference to the current mystique surrounding NFTs.

Wong shares that the platform will develop cogenerated NFT projects with Asian creators as well as key opinion leaders who could be NFT amateurs, including illustrators, photographers and even makeup artists. “We plan to offer consultation services to newcomers in the future,” she says.

During the gold-rush phase for NFTs, short-term speculation is unavoidable, as are frauds and scams, notes the entrepreneur.

She has seen artists’ works getting stolen and uploaded to NFT platforms, including OpenSea. Counterfeits can still be transacted on the blockchain, as there is often no way to verify who owns the copyrights.

But the industry is fighting back. In July 2021, DeviantArt, an online community for digital artists, launched a project to combat NFT fraud using image recognition technology. Since August, the initiative has sent artists over 80,000 alerts regarding potential infringements in the form of minted NFTs alone.

As for Paititi, the platform will closely monitor reports and delist suspicious projects. But, says Wong, “We won’t do prelisting verification because we think that would go against the decentralization principle of blockchain.”

Art galleries are another platform for NFT trading. For instance, Shout Art Hub & Gallery, at Hysan Place in Causeway Bay, provides private spaces for visitors to experience the digital artworks on display.

Jimmy Au, the gallery’s manager, thinks the appeal of NFTs lies in part in the ability of collectors to own variations of the same artwork at a relatively low price.

It takes time to get used to the idea of valuing an asset that exists only in digital form. Au reveals a strategy to help collectors make the transition from owning physical objects to digital ones. “Some customers feel more secure having a physical receipt, rather than just seeing the artwork in their digital wallet.”

Benny Cheng, co-founder of Hungry Sausages Lab (HSL), runs Not for Teeth — a 740-square-meter, bricks-and-mortar NFT club in Wan Chai, which serves as a hub for exploring the endless possibilities of “phygital” (physical-meets-digital) activities.

“We believe the future is where the virtual and physical worlds coexist dependently,” says Cheng. “Not for Teeth will serve as a bridge between creators and fans to form a basis for community bonding and interaction.” He adds that creators will be rewarded with increased sales and fans, while fans can meet their favorite creators.

When the club opens to the public later this year, VIP areas and benefits will be reserved for its members — holders of HSL’s latest NFT collection.

The Paititi app provides a platform and community for collecting, trading and managing NFTs;. (PHOTO PROVIDED TO CHINA DAILY)

NFTs have been embraced by artists, collectors, investors, corporates, celebrities and brands. Everyone involved is working hard to streamline the last mile for consumers — that is, product and service delivery.

Tam Jai International (of the soup noodle restaurants) will roll out its first-ever NFT collection, Souper Hero, on June 19, and join the Sandbox — a metaverse invested in by Animoca. Owners of any of the 10,020 NFTs will be entitled to a free bowl of rice noodles with two toppings plus a complimentary VIP membership in the restaurant chain.

Emil Chan, adjunct professor of the Executive MBA program at the City University of Hong Kong, feels the launch will have a positive impact on the local market since it will enable NFTs to reach a wider audience in Hong Kong. 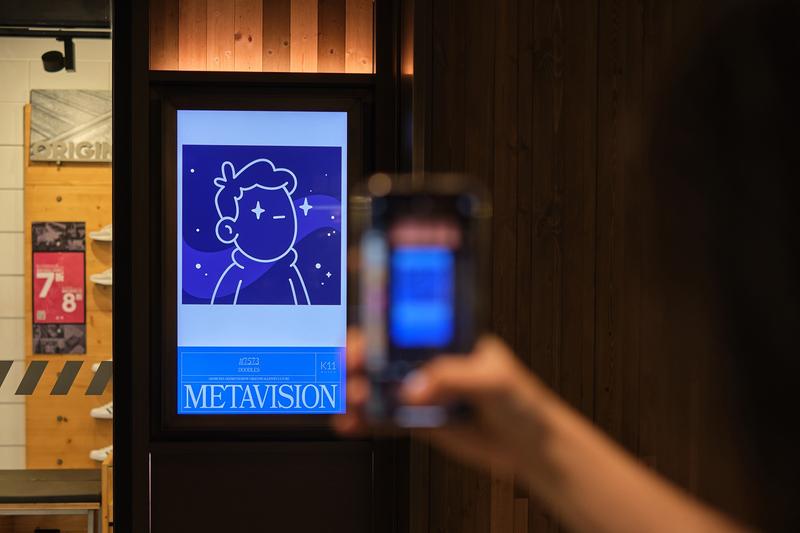 Doodle #7573, on display until June 19 at K11 Musea as part of the upscale mall’s Metavision NFT showcase. (PHOTO PROVIDED TO CHINA DAILY)

Chan feels not having to go through the process of purchasing cryptocurrency could encourage more Hong Kong people to establish their first digital wallet. “Crypto and fiat money will eventually converge,” he predicts.

The NFT boom began after Everydays: The First 5,000 Days — the first NFT sold at a major auction house — went under the hammer for an eye-watering $69.3 million at Christie’s in March 2021. But the trend has yet to go mainstream on the Chinese mainland, where the trading of NFTs on cryptocurrency-based blockchains like ethereum is prohibited.

“The (Guangdong-Hong Kong-Macao) Greater Bay Area, as well as countries in the Belt and Road Initiative, could trade on this platform,” he says. “The mainland is not going to miss out.”

For now, the changes we’re seeing remain incremental. As one of the “generals” of this digital revolution, Animoca’s Siu expects the NFT industry to grow and mature substantially over the next few years. For that to happen though, certain obstacles will need to be overcome.

“It’s difficult to explain concepts of property rights and data ownership to the average consumer, and many centralized platforms are resisting the change,” he says. “But we believe the transition to a system where the end user has more rights and choices is inevitable.”