With John Lee at the helm, city can expect recovery

Back in 2019 at the height of the anti-government riots, Hong Kong had its first glimpse of John Lee Ka-chiu’s toughness as a leader when the then-secretary for security valiantly defended the Hong Kong Special Administrative Region government in the Legislative Council.

Shouted down and heckled by radical opposition lawmakers, he patiently explained the need for the proposed extradition bill, and called for the return of peace and sanity on the streets of Hong Kong.

Thanks to the professional dedication of the Hong Kong Police Force, of which Lee was once a career officer, calm eventually returned. As the SAR government’s chief secretary for administration in his previous official post, Lee has shown himself capable not only as a law enforcement officer but also as an administrator. His election as the sixth-term chief executive is a judicious choice by the Election Committee. The city should count itself lucky to have someone so experienced in both public security and administration at this critical time.

Contrary to some malicious critics, last year’s electoral reform and the election of Lee are testament to the enduring effectiveness of “one country, two systems”, and the foresights of those who helped design the Basic Law of the HKSAR. Social stability is paramount. After the unprecedented destructiveness of the 2019 riots, Beijing could not have found a more suitable local leader to run the city.

Lee is sometimes described as a “hard-liner”. Actually, he did what was necessary to restore order and stability in the city; that was his job. Indeed, he and retiring boss Carrie Lam Cheng Yuet-ngor showed far greater tolerance of and humanity toward violent protesters and rioters than was shown by the American government with the pro-Donald Trump rioters in the US Capitol in January 2021, and by the Canadian government toward the truckers’ protests this year. These two Western governments were especially vocal in their criticism of, with the US even imposing sanctions against, Lam and Lee. Well, hypocrisy and shamelessness know no bounds with such Western democracies.

With Lee’s election, Hong Kong and Beijing will be able to see eye to eye and work closely for the betterment of the city. In his 44-page election manifesto, Lee declared his priority will be to enact a security law under Article 23 of the Basic Law. Previous chief executives had tried but failed; Lee will finally deliver. Along with the National Security Law for Hong Kong, it will stand him in good stead going forward to address deep-seated problems plaguing Hong Kong society, such as inadequate housing, low education standards and social inequality. The kind of lawlessness and violence we saw in 2019 will, hopefully, never be repeated again. As Lee once said, the radical opposition and its violent supporters had threatened to turn Hong Kong into a “bottomless abyss”. Thanks to Beijing’s wise and timely intervention, that will never happen again. And in Lee, the central government has found a safe pair of hands. 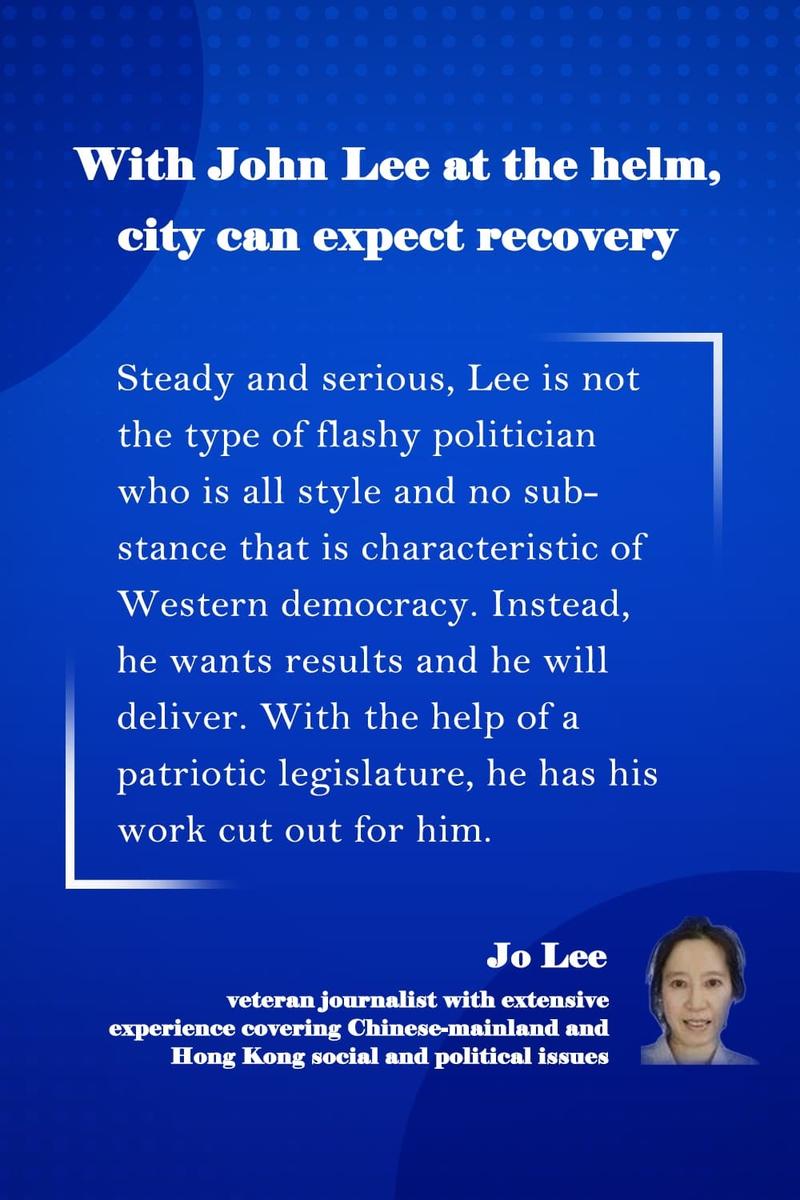 But to resolve livelihood issues, he will need to approach and understand the public and learn about their hardships. Recently, as part of his election campaign, he visited families in cramped flats and took notes of the problems they raised. That is a good start. To govern well, he must care for those who are disadvantaged in society.

Steady and serious, Lee is not the type of flashy politician who is all style and no substance that is characteristic of Western democracy. Instead, he wants results and he will deliver. With the help of a patriotic legislature, he has his work cut out for him.

Meanwhile, he must work closely with mainland authorities to administer the “zero COVID” policy, still the only viable path forward for China. Hong Kong must prepare for recovery and reopening, and to restore our status as a global financial hub after more than a year of restrictions and quarantines. Many local business leaders have rightly expressed optimism that Lee will lead Hong Kong through a successful pandemic recovery. But he also needs to listen to concerns of global companies, many with regional headquarters in Hong Kong, about the challenges of hiring and retaining foreign employees. Foreign firms need to be reminded that as a “super-connection” hub between the Chinese mainland and international business, Hong Kong will remain unrivaled.

At his final campaign rally before his election, Lee promised to renew and restore hope, strengthen the city’s economy, and return it to the vibrant and international metropolis it was before the 2019 riots and the pandemic. Warning that the city had no more time to waste, the new leader appealed to everyone to come together and work with him to “start a new chapter” for Hong Kong.

“Caring, inclusive, diverse and full of vibrancy and hope” — that is Lee’s vision for Hong Kong. Together, Hong Kong people have the next five years to unite and realize that this city is still the best home there is for all.

The author is a veteran journalist with extensive experience covering Chinese-mainland and Hong Kong social and political issues.