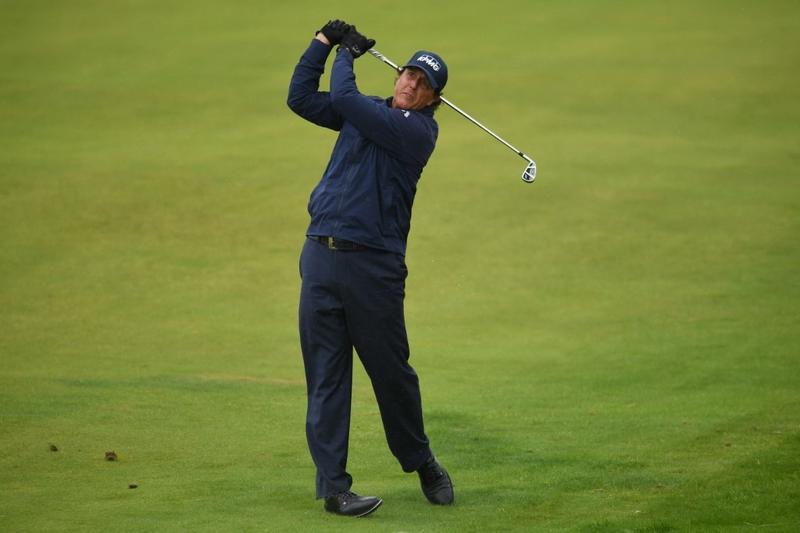 US golfer Phil Mickelson plays a shot on the 12th hole during the second round of the British Open golf Championships at Royal Portrush golf club in Northern Ireland on July 19, 2019. (GLYN KIRK / AFP)

Phil Mickelson said on Friday he will not defend his PGA Championship title after having stepped away from the game in February amid fallout from comments he made regarding a Saudi-backed golf league.

Mickelson had kept golf fans guessing about whether he would be at Southern Hills Country Club next week but the speculation ended with the PGA of America confirming he would not be in Tulsa, Oklahoma.

Phil Mickelson had kept golf fans guessing about whether he would be at Southern Hills Country Club next week but the speculation ended with the PGA of America confirming he would not be in Tulsa, Oklahoma

The 51-year-old American becomes just the third PGA champion not to defend his title after Tiger Woods in 2008 and Ben Hogan in 1949, both of whom bowed out due to injury.

"We have just been informed that Phil Mickelson has withdrawn from the PGA Championship," the PGA of America said. "Phil is the defending champion and currently eligible to be a PGA Life Member and we would have welcomed him to participate.

"We wish Phil and Amy the very best and look forward to his return to golf."

Mickelson's public image took a hit when the author of an unauthorized biography on the six-times major champion said the golfer told him he was willing to look past Saudi Arabia's human rights record to gain leverage with the PGA Tour.

Saudi Arabia's government has denied accusations of human rights abuses and Mickelson later apologized for the comments, which he claimed were off the record, and then said he planned to take time away from the sport.

Last month Mickelson filed for a release from the PGA Tour to play in the inaugural LIV Golf Invitational event, to be held June 9-11 near London, and also registered for the PGA Championship and June 16-19 US Open.

The PGA Tour on Tuesday rejected requests from several players, including Mickelson, for clearance to play the LIV opener.