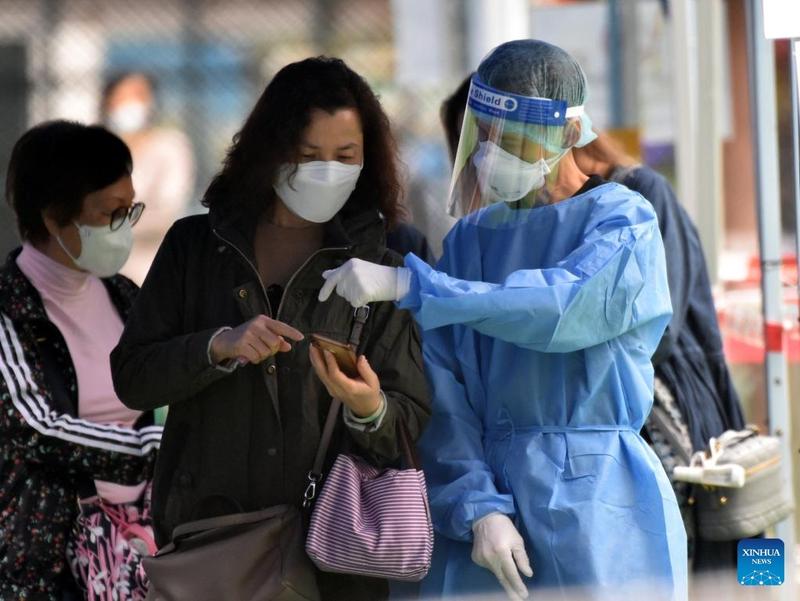 Chuang Shuk-kwan, head of the communicable disease branch of the Centre for Health Protection, said in a news briefing that the new cases comprised 21 imported infections and 277 local cases.

She said 126 cases were confirmed through nucleic acid tests and 172 by rapid antigen tests.

Chuang Shuk-kwan, head of the communicable disease branch of the Centre for Health Protection, said in a news briefing that the new cases comprised 21 imported infections and 277 local cases.

Friday’s figure is slightly higher than the 284 cases recorded on Thursday, bringing the infection tally during the city's fifth wave of the pandemic to 1,195,322.

Among the 21 imported cases, six were detected at the Hong Kong airport, 14 at quarantine hotels while the remaining one was found on the 12th day of the traveler’s arrival. The 24-year-old man from Singapore arrived in Hong Kong on April 28. He also tested positive for the virus on April 20 and was classified as a re-positive case, Chuang said.

Chuang also said that eight more travelers — most of them from the United States — were found to have the Omicron sub-variant BA.2.12.1, bringing the city’s tally of such cases to 19.

The city’s tally of the BA.2.12 sub-variant rose to seven as one new case involving a traveler from the US was detected.

As the number of COVID-19 infections stabilized, the financial hub saw a second outbreak involving restaurant within a week.

Patrons who visited Sky Cuisine restaurant in Sheung Wan between 6 pm and 11 pm on May 7, along with around 50 staff members, will need to undergo compulsory testing for COVID-19

Chuang said at least 29 patrons and a staff member of Chinese restaurant Sky Cuisine in Sheung Wan were found to have the virus.

The patients, aged between eight and 117, dined at the eatery between 6 pm and 11 pm on May 7 and were mainly sitting on the third floor.

Chuang said that the authorities are still conducting contact tracing, adding that more than 200 patrons and around 50 staff members will need to undergo compulsory testing.

Hospital Authority chief manager Sara Ho said at the same briefing that three patients aged 80 and 86 who had COVID-19 have passed away, bringing the toll during the fifth wave to 9,146.