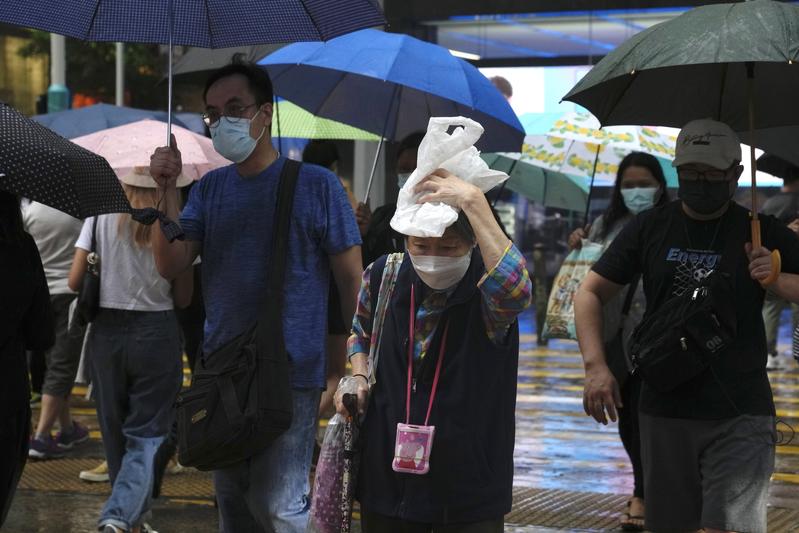 People wearing face masks walk in the rain at the central district of Hong Kong, May 11, 2022. (KIN CHEUNG / AP)

Chuang Shuk-kwan, head of the communicable disease branch of the Centre for Health Protection, said in a news briefing that there were 248 local infections and 32 imported cases.

Chuang Shuk-kwan, head of the communicable disease branch of the Centre for Health Protection, said in a news briefing that there were 218 local infections and 32 imported cases

She said 131 cases were confirmed through nucleic acid tests and 149 by rapid antigen tests. Wednesday’s figure is higher than the 273 infections recorded on Tuesday, bringing the infection tally during the city's fifth wave of COVID-19 to 1,194,740.

Chuang said 16 of the 32 imported cases were detected at the airport while the rest were found during quarantine.

Chuang said three more diners at the Golden Peony Court Restaurant in Yuen Long tested positive, bringing the number of cases in that cluster to 23.

“We’ve managed to trace all the customers. Three more patrons started to have mild symptoms after dining there on May 1,” Chuang said, adding that they were aged 71 to 76 years old.

She said 20 diners, a cook, and two close contacts linked to the restaurant have so far tested positive for COVID-19.

“Many have mild or no symptoms…We have yet to identify a superspreader,” Chuang said.

She added that one diner had gone to Shenzhen while two others have flown to Malaysia. The diner who went to Shenzhen is now in quarantine.

Chuang also said that  15 students and nine school staff members also tested positive for the virus before they could go to school. Five of them came from kindergartens, nine from primary schools, and 10 from secondary schools.

Hospital Authority chief manager Sara Ho said at the same briefing that a 68-year-old man and an 86-year-old woman with COVID-19 died in the last 24 hours. A 90-year-old man also passed away on April 20, bringing the toll during the fifth wave to 9,142.