The sound of China

Student's passion for the erhu brings its beautiful melodies to a wider global audience, He Qi reports in Shanghai. 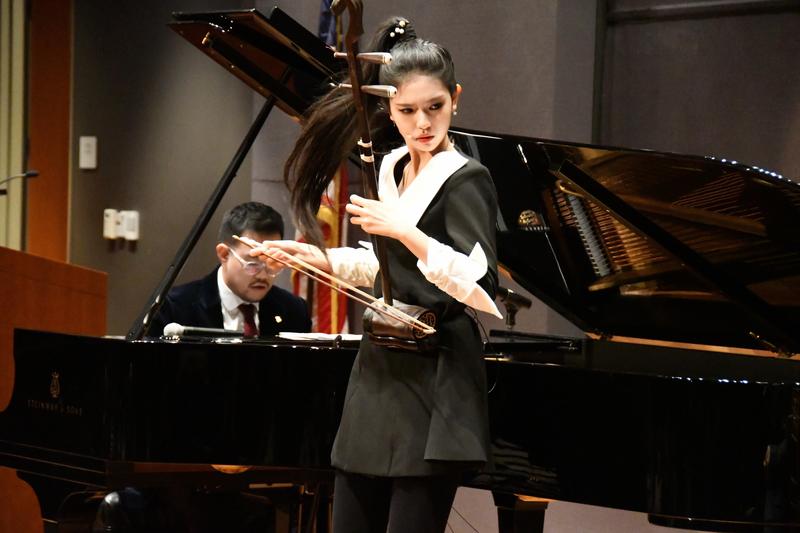 Chen Yimiao gives a speech and erhu performance, illustrating the charm of the traditional Chinese two-stringed, bowed instrument, to the audience of a cultural event held at Bowers Museum in California earlier this year. (PHOTO PROVIDED TO CHINA DAILY)

The sound of the erhu, the traditional Chinese musical instrument, is becoming better known globally thanks to the efforts of one college student.

Chen Yimiao, born in 2004, comes from a Beijing family steeped in musical tradition. Her grandfather Chen Yaoxing and father Chen Jun are both well-known erhu players.

I see the great potential of the erhu, but I also realize that there is still a long way to go in the development of the musical instrument.

Unsurprisingly, as a child, the now 17-year-old developed a keen interest in music, and in the erhu in particular.

Currently, studying at Berklee College of Music in Massachusetts, the United States, she has also participated in various musical events at home and abroad, in addition to combining erhu with contemporary music, exposing a greater number of people to the timbre of the instrument.

"Playing erhu is part of my daily routine, like eating and sleeping. It is an indispensable part of my life," says Chen Yimiao, who started practicing the instrument at 4 years old, though she admits that she was too young to remember exactly when.

"For as long as I can remember, I've been practicing the erhu for about eight hours a day," she says.

She believes that her passion for the two-stringed, bowed musical instrument comes almost entirely from her family. "The home environment has always influenced me and helped me to keep practicing," she says. "Now, not only can I not live without it, but I also hope more people can enjoy it.

"It helps me to speak out," she says, admitting that she was an introverted and quiet person and the instrument has enabled her to express her feelings. 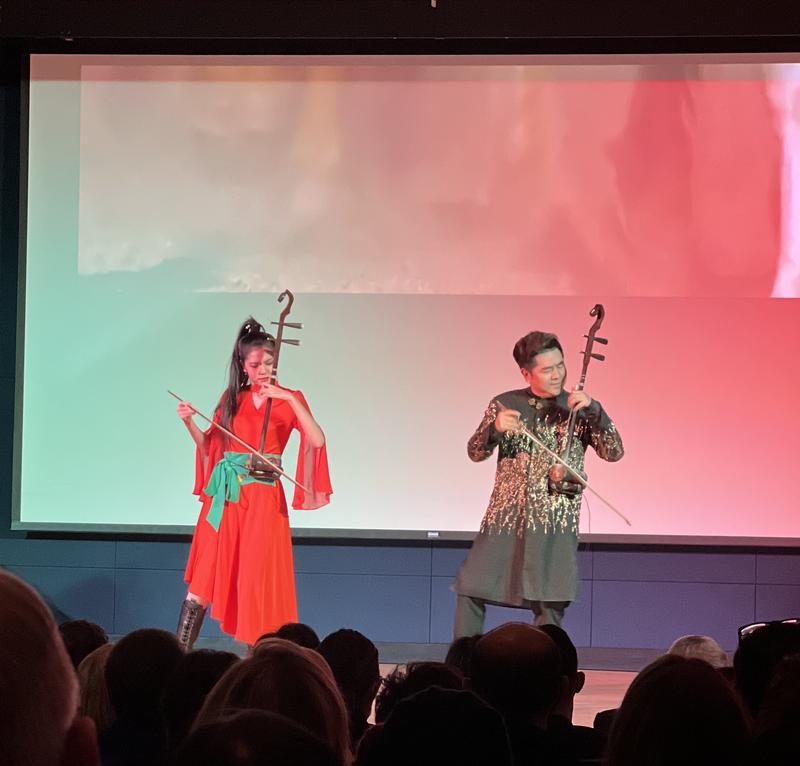 Chen Yimiao performs with her father Chen Jun at the commemoration of the 50th anniversary of former US president Richard Nixon's historic visit to China at the Richard Nixon Presidential Library and Museum in Yorba Linda, California, in February. (PHOTO PROVIDED TO CHINA DAILY)

As her love for it grows, inheritance may become her lifelong goal.

Known as a key Chinese traditional bowed instrument, the erhu dates back to the Tang Dynasty (618-907).However, its acceptance and recognition lags far behind popular Western instruments, such as the piano and violin. Difficulty mastering its sonorous tones and actually learning to play it may well be some of the reasons for this.

"We mostly use the thumb, index, and middle fingers in our daily life, however, playing the erhu requires flexible pressing of strings with the ring and little fingers."

She points out that her most painful and unforgettable experience was in junior middle school when she continuously played the same melody for more than 20 hours to achieve an ideal recording.

Even in the most painful moments, she never thought of giving up. She believes that the pain of practicing comes from pursuing a higher-level performance. Her efforts have indeed enabled her to show her talent on various stages.

Chen Yimiao first performed on China Central Television with her grandfather and father at the age of 5, went with her father to erhu concerts across China and has performed with renowned orchestras. 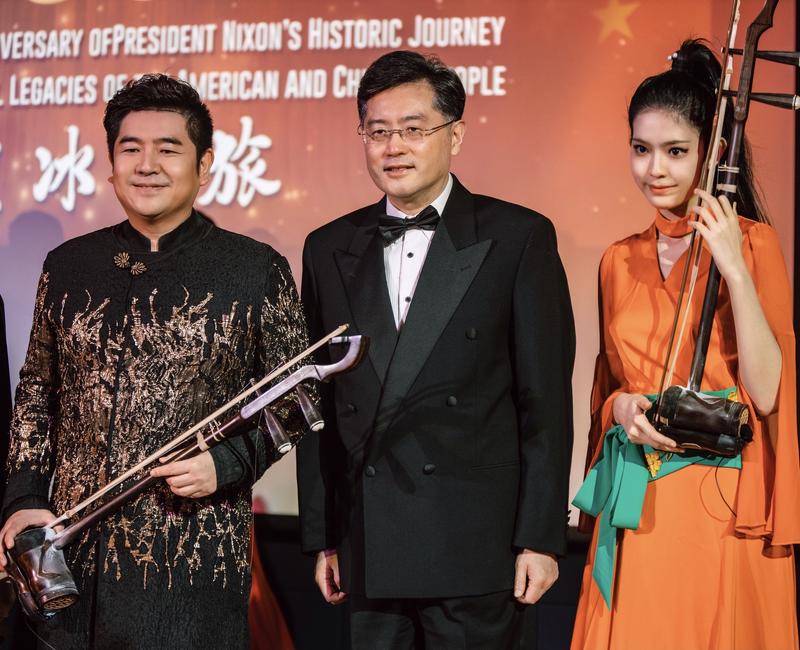 The artists with Chinese Ambassador to the United States Qin Gang at the event. (PHOTO PROVIDED TO CHINA DAILY)

Meanwhile, she has also brought the erhu to countries such as the US, Canada, Japan, Australia, New Zealand and France.

Earlier this year, her performance at the commemoration of the 50th anniversary of former US president Richard Nixon's historic visit to China, held at the Richard Nixon Presidential Library and Museum in his hometown Yorba Linda, California, saw her shine onstage. As a milestone in the political history of the 20th century, the "ice-breaking "trip promoted a relationship of mutual respect between China and the US and the circulation of economy and culture. The invitation of Chen Yimiao to play erhu further promoted the cultural exchanges between the two countries.

After that, she gave a speech and performance－carrying her musical instrument with her－illustrating the charm of erhu to the audience of a cultural event held at Bowers Museum in California.

A video of her speech and performance, which was uploaded on the video-sharing platform Bilibili, has been clicked over 1.86 million times by internet users and has won her strong support among young people. In it, she speaks fluent English and plays the erhu gracefully, showing her emotions through the instrument, with which she mimics the sound of people laughing and crying, horses galloping and birds singing, as well as performing many other tricks that wow the audience.

A user named Dengdeng commented on the video and said: "It turns out that playing Western music with an erhu is so wonderful, which really opens up a new world for me. It's our pride." 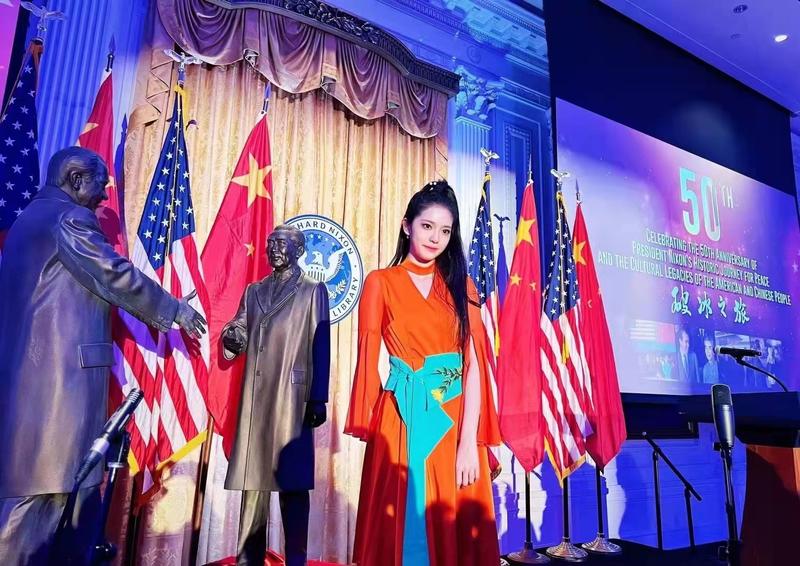 Chen Yimiao at the library and museum. (PHOTO PROVIDED TO CHINA DAILY)

"The feeling of performing the erhu in various countries is never the same, since people have a different understanding of Chinese culture," she says. "Some foreigners know the Chinese instrument, so they can immerse themselves in the performance, while more people do not know it, and to them, it will feel very fresh and special.

"I see the great potential of the erhu, but I also realize that there is still a long way to go in the development of the musical instrument," she adds

During this process, she was being questioned all the time.

"Many people asked me why I decided to choose such a niche instrument over other popular choices, like the piano or violin, but I believe that such doubts come from an incomplete understanding of erhu," she explains.

According to Chen Yimiao, the erhu can adapt to various kinds of music, and is especially suitable for pop music. "It is a melodic instrument, which can easily imitate the singing of human voices and it has been used as an accompaniment to traditional operas," she explains, adding that Chinese operas were considered the "pop music" of their time. 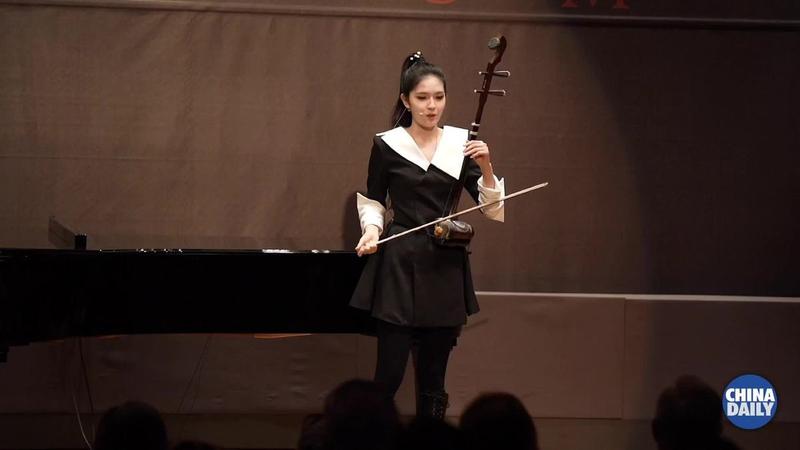 Moreover, she says that the "explosive nature" of the instrument allows it to perform some world-renowned classical pieces very well.

To display the diversity of the instrument, since 2019, she has started combining it with contemporary music and has released her own erhu record on which she also plays world-famous pieces.

As a freshman at Berklee College of Music, she considers promoting the instrument as her most important goal. "It may not be like piano or guzheng (Chinese zither), which can convey a melodious timbre as soon as one starts playing," she admits.

Like many Chinese music enthusiasts, her foreign friends found it hard to play it at first. "Generally, the first time a beginner plays the erhu, the sound is just like cutting the wood with a saw," she says.

Most of her classmates and even some professors in the US had never seen the erhu before, but they showed great interest in it. "They think it is amazing to play a song on only two strings," she says.

In addition to influencing the people around her in the ways of the erhu, she is learning composition and music arrangement.

"There are so many people who want to play the piano or violin because they can replicate a lot of classical music works, and I think, to promote an instrument, beautiful and catchy melodies count," she says. "I hope to create beautiful melodies and music that reflect the timbre of the erhu."