Raducanu retires in Rome as back injury persists 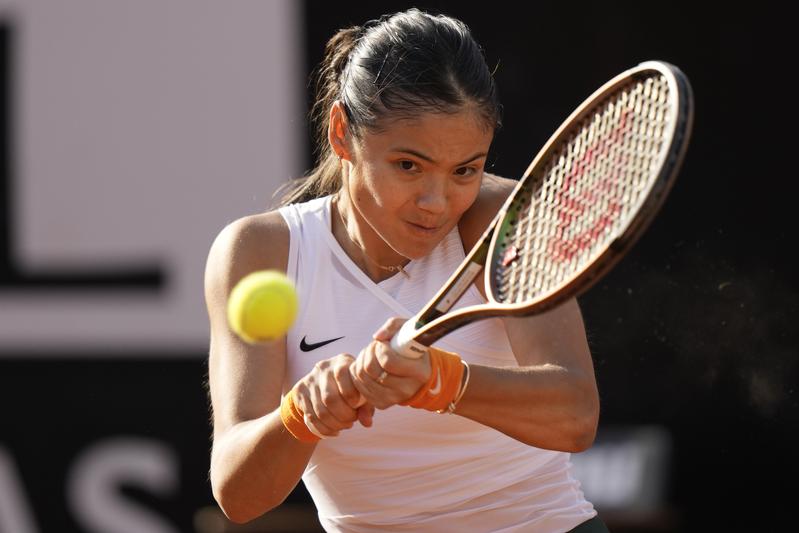 Emma Raducanu returns the ball to Bianca Andreescu during their match at the Italian Open tennis tournament, in Rome, May 10, 2022. (ANDREW MEDICHINI / AP)

Briton Emma Raducanu was unable to overcome a back injury which forced her to retire from her first round match against Bianca Andreescu at the Italian Open on Tuesday.

Raducanu, who had also struggled with a back injury during her previous tournament in Madrid and a hip injury earlier this year, was trailing 6-2 2-1 when she called it quits.

Definitely disappointed with how today went. But I guess I wanted to give it a try. I never really knew how bad it was until I kind of went out there. I'm still learning when it's right to push my body and push through it, and when it's not. I guess that's something I'm learning at these tournaments.

"Definitely disappointed with how today went. But I guess I wanted to give it a try. I never really knew how bad it was until I kind of went out there," Raducanu told reporters.

"I'm still learning when it's right to push my body and push through it, and when it's not. I guess that's something I'm learning at these tournaments.

"After Madrid I thought that maybe taking one, two days off, it would just go away because a lot of the other small niggles I've had, they've kind of gone away after taking two days off."

The battle of the reigning and former US Open champions on clay looked an intriguing prospect but Raducanu struggled from the outset and served poorly, handing Andreescu a number of break points.

Raducanu was clutching her back when she took a medical timeout after going 5-2 down but returned to the court minutes later where the Canadian held to love to take the opening set.

The 19-year-old Raducanu held serve at the start of the second set but looked uncomfortable yet again and this time she took the decision to retire when she was down 2-1 in the second.

Raducanu, who played on clay professionally for the first time last month, said she did not want to make a hasty decision to skip the French Open and focus on the grass court swing and her home Grand Slam at Wimbledon.

"Obviously I would not want to miss the French Open. The whole clay season leads up to it," she said.

"I think the last few weeks have been really positive. I've learnt a lot about myself and my game has definitely improved on this surface."

Tunisian Ons Jabeur, who became the first African player to win a WTA 1000 title in Madrid over the weekend, survived a second set wobble to dispatch Romania's Sorana Cirstea 6-0 7-6(1).

Jabeur looked set for a comfortable victory when she bagelled Cirstea and was 5-2 up in the second with 45 minutes played.

However, Cirstea fought back valiantly as Jabeur lost her focus and made a slew of errors, forcing a tiebreak where the Tunisian eventually prevailed to win her seventh consecutive match for the first time in her career.