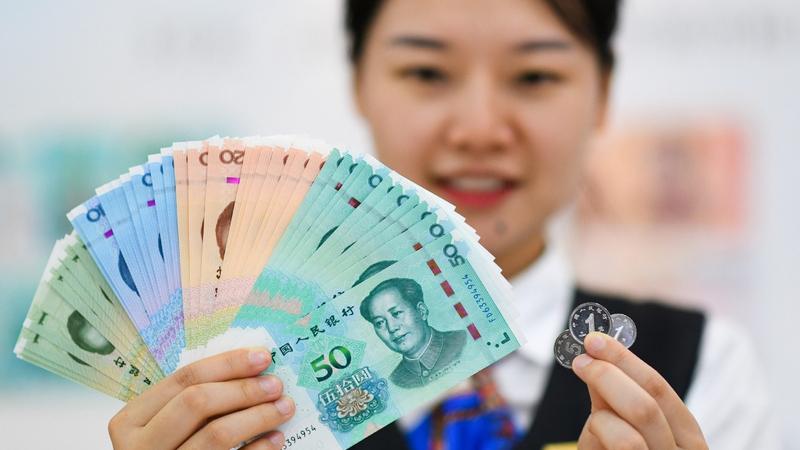 A woman shows banknotes and coins included in the 2019 edition of the fifth series of the renminbi. (XINHUA)

China will guide its banking and insurance sectors to expedite implementation of various financial policies as well as increase and improve financial supply to support the real economy, a regulatory official said.

Liang Tao, vice-chairman of the China Banking and Insurance Regulatory Commission, said the regulator encourages large banks (whose allowance for loan impairment losses to nonperforming loans remains high) and other quality listed banks to cut the figure in an orderly manner to unleash more credit resources.

The regulator will give full play to insurance funds' advantages of long-term investing and further reduce the proportion of non-standard assets in total assets that insurers invest in. It will also create and improve long-cycle evaluation mechanisms for insurance funds, enrich channels for insurance funds to participate in investment in capital markets, and encourage insurance asset management companies to increase efforts to issue portfolio products and allocate more funds to equity assets, said Liang in an interview with Xinhua News Agency on Monday.

These efforts aim to boost effective financing demand while many companies face operational challenges amid production halts and to reduce the pressure on banks over a rebound of NPLs, as businesses in some regions and industries hit hard by COVID-19 have difficulty in repaying loans on time.

The CBIRC requires banks to ramp up lending to support micro and small enterprises and rural revitalization. This year, large State-owned banks will add 1.6 trillion yuan ($238.6 billion) of inclusive loans for micro and small enterprises, and city commercial banks will significantly increase the proportion of this type of loans in their total loans.

In the first quarter, China's outstanding inclusive loans for micro and small enterprises reached 20.6 trillion yuan, up 22.6 percent year-on-year. The lending rate of new inclusive loans for small businesses fell more than 0.2 percentage point from the beginning of this year, according to the CBIRC.

Banks should renew loans, extend and adjust repayment arrangements, and waive default interest for micro, small and medium-sized enterprises－MSMEs－and self-employed households, which meet certain criteria set by the regulator, as appropriate, and their credit records will not be affected, Liang said.

For regions severely affected by COVID-19, such as Shanghai and Jilin province, the CBIRC will guide its local offices to strengthen communication and cooperation with local government authorities to launch relief measures adapted to local conditions in a more targeted manner, thus coordinating the solution to pressing problems of local people, industries and businesses.

Taking a look at regulatory indicators in the first quarter, the operation of China's banking and insurance sectors remains steady and the overall financial risks are controllable, Liang said.

During the period, the Chinese banking sector's NPL ratio was 1.79 percent, which is considered a reasonable level. Its balance of loan loss provisions reached 7.3 trillion yuan and the capital adequacy ratio of commercial banks was 15 percent.