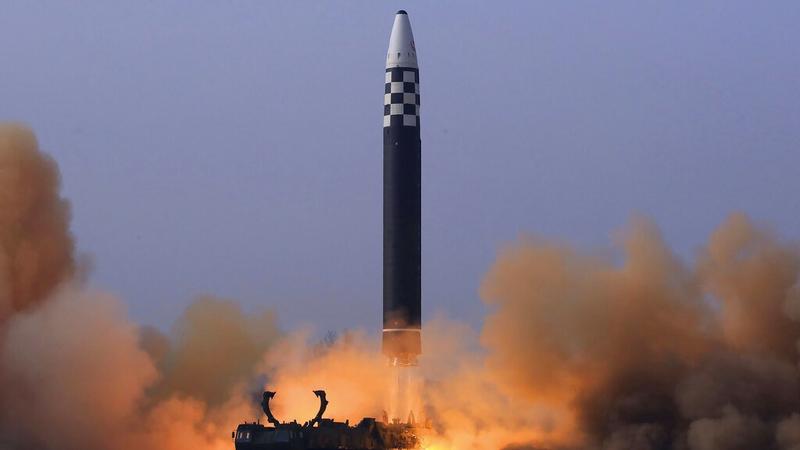 This photo distributed by the government of the Democratic People's Republic of Korea shows what it says is a test-firing of a Hwasong-17 intercontinental ballistic missile, at an undisclosed location in the DPRK on March 24, 2022. (KOREAN CENTRAL NEWS AGENCY / KOREA NEWS SERVICE VIA AP)

The JCS said in a statement on Wednesday that it detected the ballistic missile, which was launched toward the eastern waters from the Sunan area in Pyongyang at about 12:03 pm local time (0303 GMT).

The Japanese government also said the DPRK fired what appeared to be a ballistic missile toward its eastern waters.

The missile traveled about 470 km at an altitude of around 780 km. The ROK intelligence authorities and the United States were analyzing further details, said the JCS.

It marked the 14th projectile launch by the DPRK this year. The DPRK said it test-fired Hwasongpho-17, a new type intercontinental ballistic missile, on March 24.

The JCS said the DPRK's repeated launches of ballistic missiles were an act of grave threats that damage the peace and stability on the Korean Peninsula and in the international community.

It urged the DPRK to immediately stop such an act that was a clear violation of UN Security Council resolutions.

The JCS added that the ROK military was tracking and monitoring relevant situations while maintaining a full readiness posture in preparation for possibly additional launches.