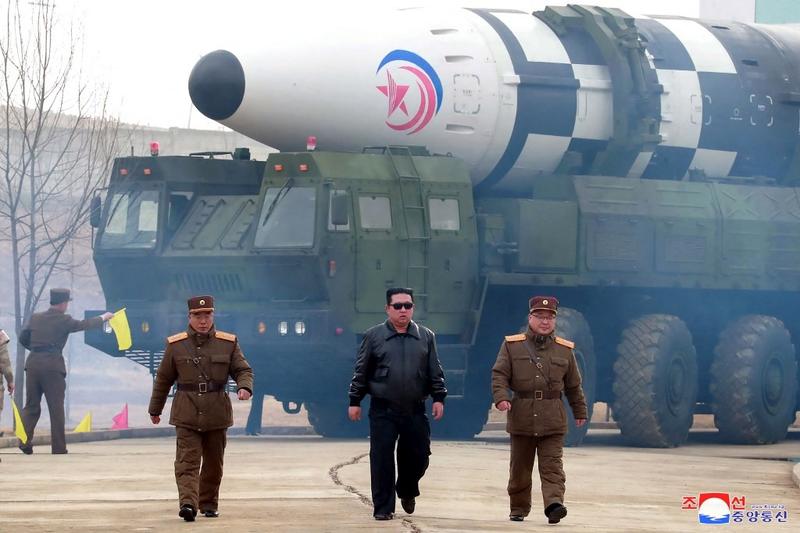 This file picture taken on March 24, 2022 and released from the DPRK's official Korean Central News Agency on March 25, 2022 shows DPRK leader Kim Jong-un (center) walking near what state media report says was a new type inter-continental ballistic missile before its test launch at an undisclosed location in the DPRK. (STR / KCNA VIA KNS / AFP)

PYONGYANG - A senior official of the Democratic People's Republic of Korea has warned the Republic of Korea of "total destruction and ruin" if it "adopts military confrontation" against Pyongyang, the official Korean Central News Agency reported on Tuesday.

Kim Yo-yong, vice department director of the Central Committee of the Workers' Party of Korea and younger sister of DPRK's top leader Kim Jong-un, gave the warning in a press statement on Monday concerning a comment made by the ROK's Defense Minister Suh Wook describing preemptive strike capabilities against the DPRK.

In case South Korea opts for military confrontation with us, our nuclear combat force will have to inevitably carry out its duty.

Kim Yo-yong, vice department director of the Central Committee of the Workers' Party of Korea

Kim said the ROK is not her country's principal enemy. "Unless the South Korean army takes any military action against our state, it will not be regarded as a target of our attack.” The ROK is also referred to as South Korea.

However, she added, "such nonsense itself is a very dangerous and nasty expression."

"In case South Korea opts for military confrontation with us, our nuclear combat force will have to inevitably carry out its duty. It is the primary mission of the nuclear force to prevent such war before anything else, but in case of war, its mission will convert into the one of eliminating the enemy's armed forces at a strike," Kim warned.

If the situation reaches such a phase, a dreadful attack will be launched and the ROK army "will have to face a miserable fate little short of total destruction and ruin," she added.

Kim made a similar warning on Saturday, saying the ROK military chief's reckless and intemperate rhetoric about the "preemptive strike" had further worsened the inter-Korean relations and the military tension on the Korean Peninsula.