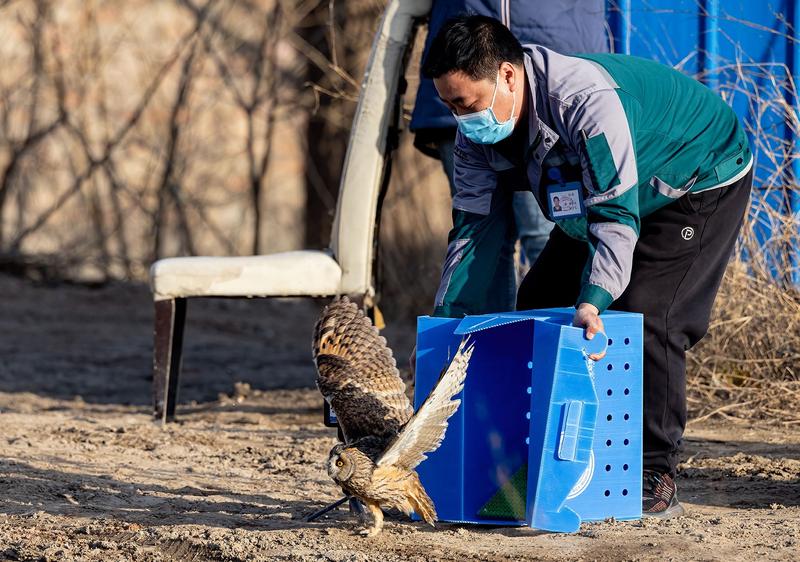 A long-eared owl is released into the forest, thanks to the care it receives at Beijing Wildlife Rescue and Rehabilitation Center. (JU HUANZONG / XINHUA)

Liu Lijun describes himself as an "emergency physician" who is tending to "patients" in need of urgent remedies.

"This white ball python, sent by the local residents, has a spine injury and is undergoing treatment here," says the 38-year-old veterinarian, who works at Beijing Wildlife Rescue and Rehabilitation Center, as he injects nutrients and antibiotics into the snake.

"The number of injured and trapped animals has seen a rise every year from hundreds to thousands, and dozens of animals are sent in a single day during the busiest times," Liu says.

The data only takes into account those sent by residents, excluding illegally raised and trafficked animals, which are forfeited and brought to the center by the police.

The surge in the number of rescue instances demonstrates the increasing awareness of wildlife rescue and habitat rehabilitation among Beijing residents, Liu adds.

"Wildlife protection is my passion and it gives me an extraordinary sense of achievement," says Liu, adding that his routine tasks include conducting a preliminary diagnosis and forming medical treatment plans for the animals. 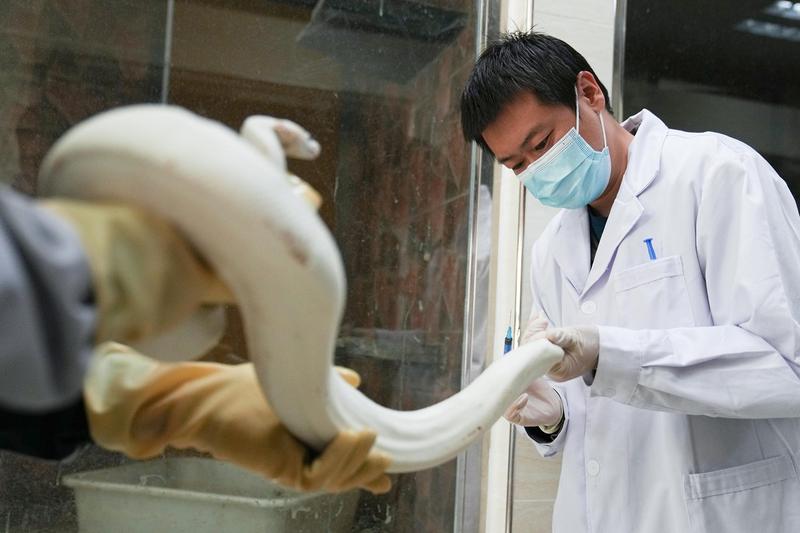 Liu Lijun tends to a white ball python with the help of his colleague at the center. The vet has treated more than 8,000 animals over the past 10 years. (JU HUANZONG / XINHUA)

Over the past 10 years, Liu has treated more than 8,000 animals. They are usually released into the forests of Beijing upon recovery. But when it comes to migratory birds, Liu and his colleagues wait for the appropriate season.

"Birds are in the majority because Beijing is an important migration route for them," Liu says.

According to the latest survey, Beijing has more than 503 bird species, the proportion of which surpasses a third of the country.

When locals spot birds in distress, most residents would send them to the wildlife care center for treatment. Such occurrences are common during spring and autumn, the migration seasons. The center has also established a breeding platform and set up numerous aid stations in wildlife habitats. There are two types of veterinarians in the center. Experimental vets are in charge of analyzing death cases and collecting blood, feces and biopsy samples, while clinical vets manage the treatment plans for animals.

While most animals rescued are released into the forest, a small proportion is used for scientific research and demonstration. The non-local ones are sent back to their original habitats, and those deemed incapable of survival following injuries are kept in the zoo under proper care. In comparison to purely treating the creatures, habitat rehabilitation increases the benefits of wildlife protection.

"Hundreds of wild animals I rescue every year seem to be an enormous amount, but in reality, it is just a drop in the bucket considering countless wildlife species are suffering in Beijing, as well as the rest of the country," Liu says.

He says he hopes the unremitting efforts of vets in treating animals can enhance public awareness of wildlife protection and habitat rehabilitation.

A variety of birds, such as black storks, great bustards, mallards and herons, choose Beijing as their habitat. There are currently 79 nature reserves in the city, occupying 368,000 hectares of area.

"The public's consciousness toward habitat rehabilitation will save more wildlife than clinical vets do," Liu says, adding that the efforts of society will contribute to the protection of the environment.