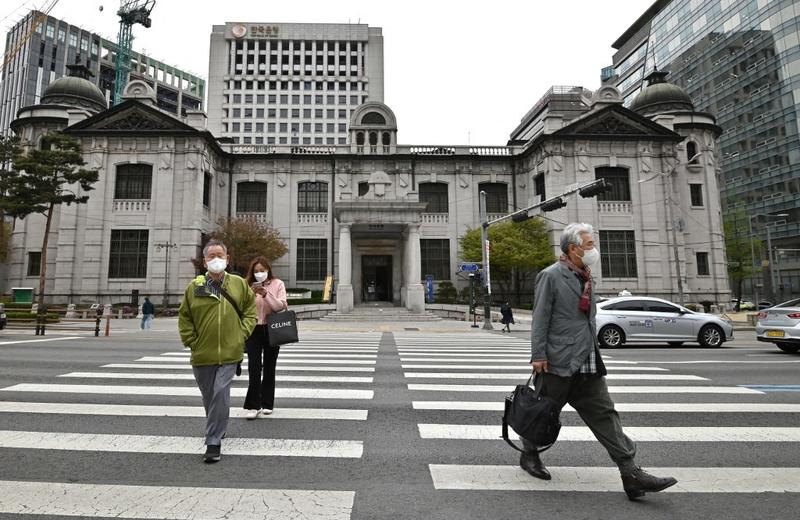 Pedestrians cross a road in front of the Bank of Korea headquarters in Seoul on April 14, 2022. (JUNG TEON-JE / AFP)

Bank of Korea (BOK)'s monetary policy board members decided to hike the benchmark seven-day repurchase rate from 1.25 percent to 1.50 percent.

The BOK increased its key rate by a quarter percentage point to 1.25 percent in January, after lifting the rate by 25 basis points in August and November last year.

Bank of Korea (BOK)'s monetary policy board members decided to hike the benchmark seven-day repurchase rate from 1.25 percent to 1.50 percent

Market expectations were divided in half over the rate-setting meeting. According to the Korea Financial Investment Association (KFIA) survey of 100 fixed-income experts, 50 percent projected a rate on hold while the remaining 50 percent predicted a rate hike.

Consumer price index (CPI) jumped 4.1 percent in March from a year earlier, marking the highest in 10 years since December 2011.

The headline inflation surpassed the BOK's mid-term inflation target of 2 percent for 12 months in a row.

The BOK said in a statement that consumer price inflation will remain high in the 4 percent range for some time and run substantially above the February estimate of 3.1 percent for the whole year.

The inflationary pressure was led by a spiraling price for raw materials, especially crude oil.

Dubai crude, South Korea's benchmark, averaged $110.9 per barrel in March, up from $92.4 in the previous month.

Driven by expensive crude oil, the country's import advanced 12.8 percent from a year earlier to $18.85 billion for the first 10 days of April.

The BOK forecast that the South Korean economy is likely to sustain its recovery thanks to the continued export growth and the expected improvement in consumer spending.

The US Federal Reserve raised its benchmark rate by a quarter percentage point into a range of 0.25-0.50 percent in March, recording the Fed's first rate hike since December 2018.

Some of market watchers estimated that the Fed may hike rates by a half percentage point in May, putting pressure on the BOK to move quickly to tighten its monetary policy stance.

The BOK said government bond yields in major countries rose sharply amid the strong US dollar due to changes in expectations about the pace of the Fed's policy normalization.

Household credit, which refers to the combined debts owed by households to banks and other financial institutions as well as purchase on credit, hit a new high of 1,862.1 trillion won ($1.5 trillion ) at the end of December.

It was up 134.1 trillion won from a year earlier, posting the second-highest yearly expansion since data began to be compiled in 2003.