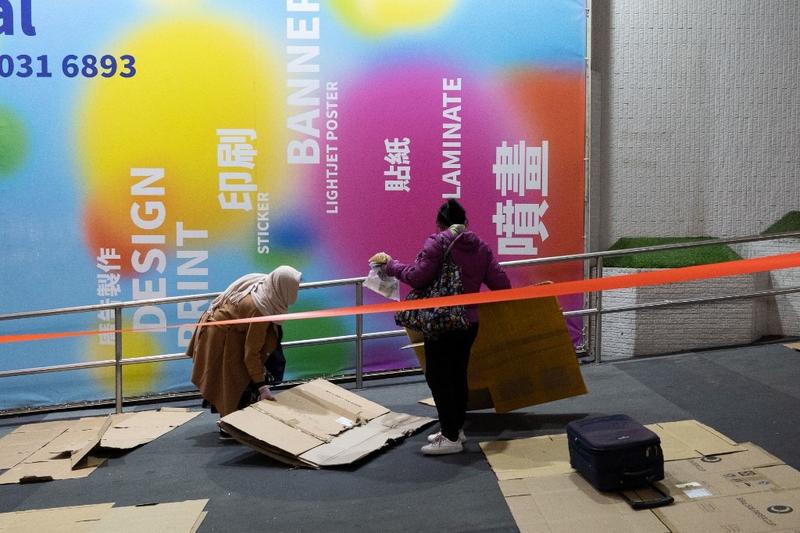 Foreign domestic helpers on their Sunday rest day pack up their belongings after an operation against people who fail to comply with social distancing measures at a subway in Hong Kong’s Central area on Feb 20, 2022, amid the city's worst-ever coronavirus outbreak. (BERTHA WANG / AFP)

HONG KONG - Ever since the worst-ever wave of the COVID-19 pandemic in Hong Kong began in December, more than 1.1 million people have been infected, with a team of volunteers reaching out and providing a helping hand to the vulnerable groups most severely affected.

One of the volunteers is Genibee, who asked that her full name not be used. Genibee grew up in the Philippines and has worked as an early-childhood teacher in Hong Kong for seven years.

After switching to working from home, she reached out to Help for Domestic Workers, a non-governmental organization looking after the interests of foreign domestic workers in Hong Kong, and volunteered to help purchase supplies, collect donations and pack anti-pandemic care bags for FDWs in need.

READ MORE: Looking out for one another

The Hong Kong Special Administrative Region government mandated last month that all employers of FDWs cannot dismiss their workers simply because they were infected with COVID-19, and that such a dismissal would be in violation of the Employment Ordinance. FDWs who test positive for COVID-19 or are regarded as close contacts will receive the same support as any other resident of Hong Kong.

I want the FDWs to feel that they are part of the Hong Kong community, part of society, and that we love them.

However, there still have been cases of FDWs who tested positive for COVID-19 who became homeless for various reasons, according to HDW.

Many confirmed patients were stranded at hospitals, as local hospitals and quarantine facilities were completely overwhelmed as the number of COVID-19 infections continued to soar at the beginning of the fifth wave of the pandemic. The affected FDWs faced an uncertain future and lack of money and supplies to care for themselves.

“Being sick and being away from families is already hard enough, while contracting the virus and not having enough support makes it even harder,” Genibee said.

Michelle Wu Man-chi, another HDW volunteer, said, “It was painful to watch those domestic workers with confirmed infections literally sleeping on the streets and corridors, while the food and supplies were running out.”

Wu and her fellow volunteers later secured some essential medicine and food, some of which was donated by other organizations. Despite being aware of the risk of being infected, they struggled to bring the supplies to foreign domestic workers in shelters during the toughest days when the city was experiencing an increasing number of positive cases and facing a severe shortage of medical supplies.

“We didn’t even have stocks of personal protective equipment, and we failed to get any at the time even after running around the shops” looking for them, Wu said. When delivering the supplies to domestic workers, she had to cover herself as much as possible with some limited supplies such as KN95 face masks and shoe sleeves that she had on hand.

Under the staunch support of the Central People’s Government, the SAR government is expanding the capacity of community isolation facilities, and for those FDWs currently without employment in Hong Kong, the Labour Department also has been assisting with their admission to suitable facilities with the support and assistance of the relevant consulates general.

“I want the FDWs to feel that they are part of the Hong Kong community, part of society, and that we love them. It’s my greatest joy when they receive the supplies and it really makes me happy,” Wu said.

Originally from Macao, Wu had been stranded in Hong Kong for almost two years before joining the HDW as a part-time volunteer to help domestic workers grapple with the fifth wave of the coronavirus pandemic.

The loneliness of being stranded and the longing for her families connected her with these domestic workers who were caught in the same situation, Wu said.

“The domestic worker community is a group that I feel really connected to. I feel their pain as well, as aside from me, they are also lonely people working in Hong Kong homes, and are not able to see their families during the pandemic,” Wu said.

In addition to collecting and sending supplies to domestic workers in need since August, Wu, together with her friends, has invested in efforts to organize outdoor workouts for domestic workers every Sunday, including yoga and kickboxing sessions, as well as meditation sessions.

She believes that what she has been doing is not merely to create a workout for the FDWs, but more of a community of friends and socialization, which can promote their mental health and other physical well-being.

HDW volunteers are still working tirelessly to bring light to the displaced, stranded domestic workers in the city, including setting up isolation centers and providing supplies to help them tide over this hardship.