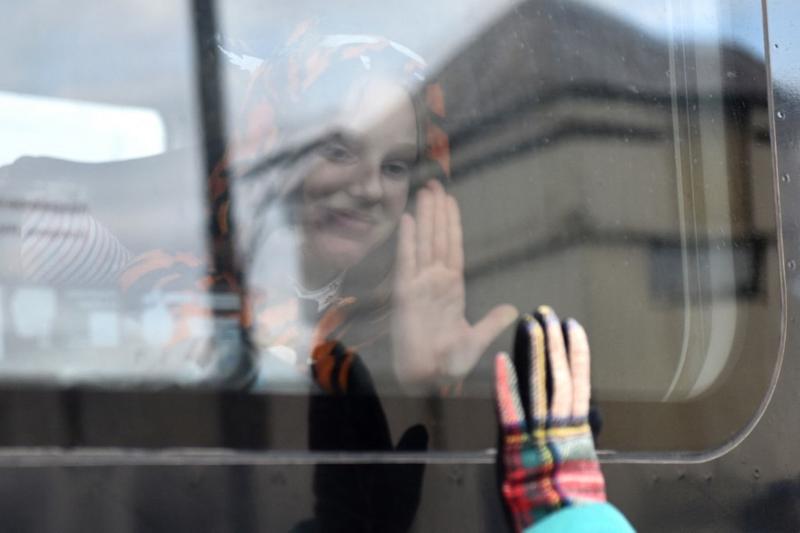 Nine-year-old Masha from Kyiv looks on from behind a train window as she leaves to Poland, in Lviv on April 5, 2022. (YURIY DYACHYSHYN / AFP)

BRUSSELS / MOSCOW / KIEV / NICOSIA - The EU is proposing the 5th round of sanctions against Moscow, which among others target coal imports from Russia, European Commission President Ursula von der Leyen said on Tuesday.

Von der Leyen said the six-pronged proposed sanctions will be discussed and given the final seal of approval by EU ambassadors on Wednesday.

The EU is heavily dependent on imported Russian gas but a plan has been set in motion to cut this dependency by two-thirds by the end of this year and make Europe entirely independent of Russian fossil fuels by 2030.

Von der Leyen said the planned new measures include a ban on coal imports worth 4 billion euros a year.

In a statement, von der Leyen said the European Commission was also pushing for a ban on Russian ships entering EU ports and on Russian and Belarusian road transport operators. There would be exemptions for agricultural and food products, humanitarian aid and energy.

It was also proposing bans on EU exports in advanced semiconductors and machinery, worth 10 billion euros, and a ban on EU imports of wood and cement, seafood and alcohol from Russia, together worth some 5.5 billion euros.

Russian companies would be barred from taking part in competing for contracts across the EU. 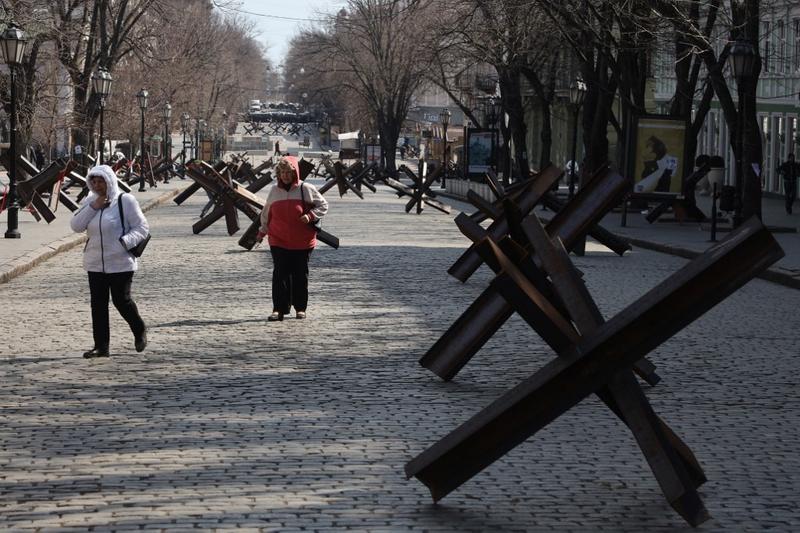 The EU was also working on other sanctions including on imports of Russian oil, she said.

"We are working on additional sanctions, including on oil imports, and we are reflecting on some of the ideas presented by the member states, such as taxes or specific payment channels such as an escrow account," von der Leyen said.

She said the EU was also proposing to add further individuals to a list of people whose assets in the bloc will be frozen and who will not be allowed to enter the EU.

Also on Tuesday, the National Guard of Ukraine said on Tuesday its divisions have arrived at the Chernobyl nuclear power plant (NPP) site and taken control of the facility's security.

"The major task of the national guardsmen on the Chernobyl NPP site is ensuring security and defense of its nuclear facilities as well as physical protection of nuclear material," the National Guard said on Facebook.

The safety of the site and its transport infrastructure will be checked by the Armed Forces of Ukraine, it said.

The Russian troops that had been in control of the Chernobyl nuclear power plant since Feb 24 left the facility on March 31.

The Chernobyl nuclear plant, some 110 km north of Kiev, suffered one of the worst nuclear accidents in human history on April 26, 1986.

In Moscow, Kremlin spokesman Dmitry Peskov said  a meeting between Putin and Ukrainian President Volodymyr Zelensky is possible only after a peace treaty is ready.

"Nothing has changed for us. We do not reject the possibility of such a meeting for our president," Peskov told a daily briefing.

"But we repeat once again that such a meeting is possible only after the text of the document is agreed upon," he said.

Moscow and Kiev have conducted several rounds of negotiations aimed at finalizing a treaty to end the ongoing crisis in Ukraine.

Putin said Russia will be more prudent this year in exporting food, especially to countries that are pursuing a hostile policy towards Russia.

"This year, against the backdrop of a global food shortage, we will have to be more prudent in our food supplies abroad, namely, to carefully monitor the parameters of such exports to countries that are clearly hostile towards us," Putin said at a meeting to support the country's agricultural sector.

At the same time, he said that "increased production volumes make it possible to ensure food prices in Russia are lower than on the world market."

Food self-sufficiency is Russia's competitive advantage and the country must protect its people from price fluctuations in the global food market, Putin said.

Meanwhile, Cyprus cannot accept the United States' suggestion to send its Russian-made weapons to Ukraine as this would create gaps in its deterrence capabilities, Defense Minister Charalambos Petrides said here on Tuesday.

Petrides was responding to press reports that unnamed US officials had sounded out the Cypriot government whether it would be willing to transfer to Ukraine all or part of the Russian-made armaments it possesses.

He said that legal problems could also arise because of a stipulation that military systems purchased from Russia may not be sold to third parties.

Cyprus is currently preoccupied with problems relating to the maintenance of its Russian-made weapons following the sanctions imposed by the EU on Russia, Petrides said.

Cyprus currently uses two types of Russian-made anti-aircraft systems, which were obtained after the United States imposed an arms embargo on Cyprus in 1974.