Numerous career paths changed after the 2008 Games in Beijing 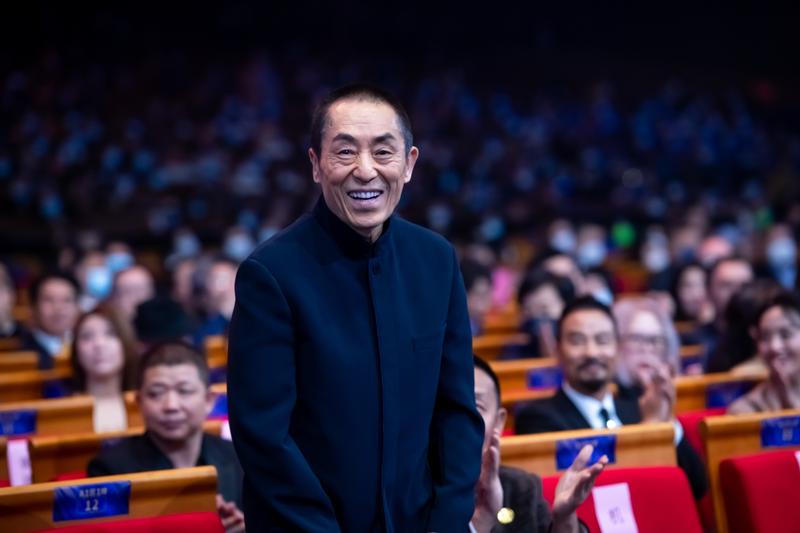 Zhang Yimou, chief director for the opening ceremonies of the Beijing Summer Olympics in 2008 and the 2022 Winter Games. (PHOTO PROVIDED TO CHINA DAILY)

Beijing is completing the finishing touches for the 2022 Winter Olympic Games, as it prepares to become the first city in the world to host both the summer and winter versions of the sporting event.

In addition to venues built for the 2008 Summer Games that have become landmarks in the Chinese capital, the Olympics left a different kind of legacy－providing experience for those working at a top-level international sporting event.

I was thrilled to learn I would become a ‘dual-Olympic director’. It’s different now. China’s status in the world, the image of the Chinese, and the rise of our national status — everything has totally changed.

ZHANG YIMOU, chief director for the opening ceremonies of the Beijing Summer Olympics in 2008 and the 2022 Winter Games

Some 14 years on, many people who formed special bonds with the Games have been busy organizing the 2022 Beijing Winter Olympics. They proudly refer to themselves as "dual-Olympic talent".

Zhang Xiaodan, deputy competition service manager at Beijing's National Speed Skating Oval, a venue for the Winter Games, said people with experience of the Summer Games have been working with organizing teams at every venue for next month's Olympics.

"They are like a secret force. Whenever we find someone who also took part in the 2008 Olympics, we immediately sense a special bond," she said.

"Not many people in the world have the opportunity to help organize two Olympics in the same city. Such an honor is, without a doubt, the result of a stronger and more confident China able to host both Games in such a short period."

Standing in front of the National Speed Skating Oval, dubbed the "Ice Ribbon", Zhang pointed to the diamond-shaped main stadium at the National Tennis Center in the distance, where she worked as a project manager in the operations department during the 2008 Games.

"I appear to have returned to the place where I started," she joked.

As well as showcasing China's achievements around the world, the 2008 Olympics changed the career paths of numerous people, including Zhang.

From 2009 to 2016, she was a project manager in the large-scale events department at the National Aquatics Center, or Water Cube, which will host curling events at the Winter Games. Now, she specializes in sports event operations.

"Few international sporting events were held in China before 2008, but in the past decade, the nation has hosted many, creating increased demand for related talent. Countless coordinated efforts need to be made to ensure the smooth running of a sporting event－and the Olympics are more complicated than most," Zhang said. 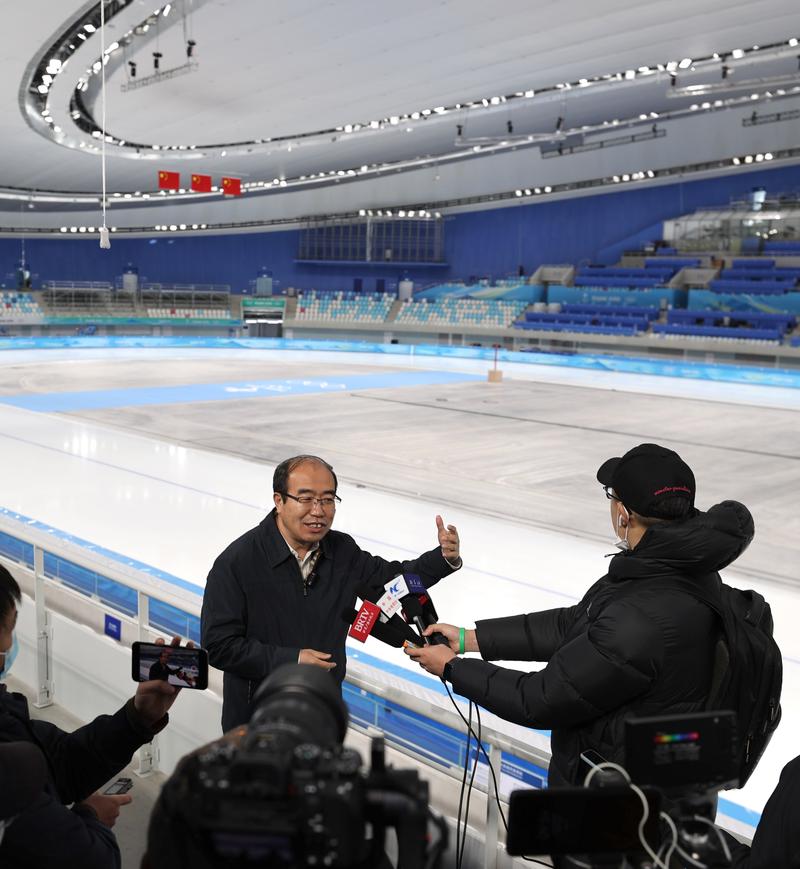 Her ties with the National Speed Skating Oval began in 2016, when the planning authority decided to build the venue on the site used to host field hockey at the 2008 Olympics. Zhang witnessed the entire construction process for the only newly built venue for ice events in Beijing.

With the city gaining experience from the 2008 Olympics, managing the Ice Ribbon after next month's Games has been prioritized from the design stage, with plans finalized before the Olympic opening ceremony takes place on Feb 4, Zhang said.

"Both the city and organizers had no experience of hosting Olympic events before 2008. Now, things are different. Not only is the 'dual-Olympic talent' more confident about organizing the Winter Olympics, other members of the organizing teams have learned lessons from hosting the 2008 Games. I'm sure we can tackle all kinds of challenges calmly, such as the ongoing COVID-19 pandemic," she said.

Many people say that the speed skating venue being used for Beijing 2022 has the same meaning for them as the Bird's Nest stadium did in 2008.

Li Jiulin, the chief engineer responsible for construction of the Ice Ribbon and the Beijing National Stadium, still keeps in his office a block of steel used to build the Bird's Nest.

Li was appointed chief engineer responsible for construction of the National Stadium 17 years ago, when he was 35.

At the time, no one in China had experience of building such a complicated steel structure, Li said, adding that his team completed 13,520 construction drawings based on 150 designs before the Bird's Nest, which is about 4 kilometers from the Ice Ribbon, was constructed. 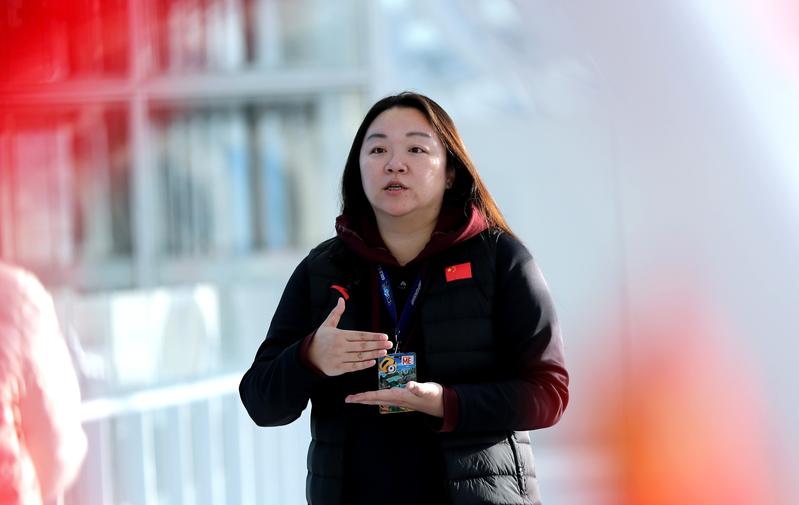 The Bird's Nest heralded a new phase in China's construction industry and showcased a range of innovative concepts, including development of a new type of steel used for the stadium's outer frame, Li said.

"Any type of architecture reflects its era. During construction of the Ice Ribbon, we prioritized green development concepts and innovation," Li said while inspecting the venue.

"To minimize use of construction materials, we used netted cables to hold the roof of the venue together. This meant we only used hundreds of metric tons of steel cables, compared with about 42,000 tons of special steel just to construct the Bird's Nest's outer frame," he said.

Li, who worked on the Bird's Nest for five years, starting when he was 35, and on the Ice Ribbon for three years from age 50, said the two Olympics have provided him with great platforms to achieve "missions impossible" as an architect.

"More important, cutting-edge architectural technologies and materials developed for Olympic venues have been gradually upgraded for other projects. For example, the netted cable roofing for the Ice Ribbon is also being used in construction work at Hong Kong airport. The Olympics have pushed us to be more innovative," he said.

Like Li, Hu Kai also has a special personal link to the Bird's Nest. Nicknamed the "Flying Spectacles", Hu competed for China in the 100-meter sprint and 4x100-m relay at the 2008 Olympics.

Hu's role has changed completely for next month's Olympics, for which he is working in the general office of the organizing committee's volunteer department.

"I will always be proud of being the Chinese athlete who finished the most running events at the Bird's Nest in 2008," Hu said in his office.

In 2019, Hu, a physical education teacher at Tsinghua University, was recruited by the organizing committee's volunteer department. He said he feels lucky to take part in another Olympics in Beijing, and this opportunity is the result of China's development.

"A lot has changed since 2008, when the nation wanted the world to see a modern China. Now, China is confident in saying that it will contribute to building a global community with a shared future. The roles of myself and the country have changed," he said. 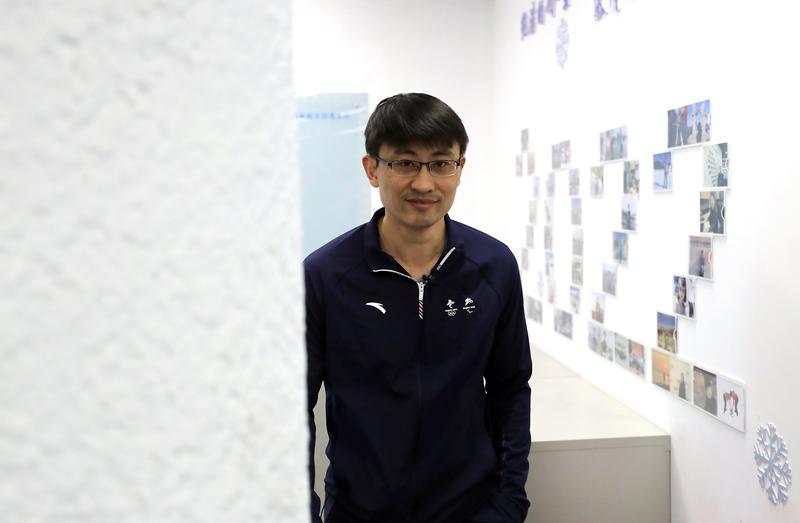 Hu Kai, who competed for China in the 100-meter sprint and 4x100-m relay at the 2008 Olympics, now works for the 2022 organizing committee's volunteer department. (ZHANG WEI / CHINA DAILY)

The volunteers for the 2008 Games impressed the world. Hu said he received a great deal of help from them, and their smiles helped him when he competed as an athlete.

He added that as China develops rapidly, its people have become more open and confident. Their understanding of the volunteers' roles has also deepened since the 2008 Games, making many Chinese realize the importance of such work for the first time. Now, it has become common practice for people to act as volunteers in different social sectors in China.

"Besides showing their enthusiasm, I believe the volunteers for the 2022 Winter Olympics will be more considerate and professional. Furthermore, I hope they can benefit from their experience and achieve personal gains while forming the backbone for the Games," Hu said.

Gao Shang, a volunteer who provided services for spectators at the Bird's Nest during the 2008 Games, cheered for Hu as the athlete took part in his 100-m sprint heat.

Now an English-language teacher at Hebei Medical University, Gao has been preparing students since 2019 to become volunteers for the 2022 Games, where they will provide medical care and assist in doping tests at events staged in Zhangjiakou, Hebei province.

"The students' eyes lit up when I shared my experience of the 2008 Olympics during their training sessions. Many of them were in primary school when these Games took place," Gao said.

She added that the 2008 Olympics changed her life. "They broadened my horizon. After seeing the leaders and athletes from different countries in person, I no longer have an abstract understanding of the world. I've also learned how to perform under pressure, which is a great advantage."

Due to her experience as an Olympic volunteer, Gao said she knows the responsibilities shouldered by such workers. 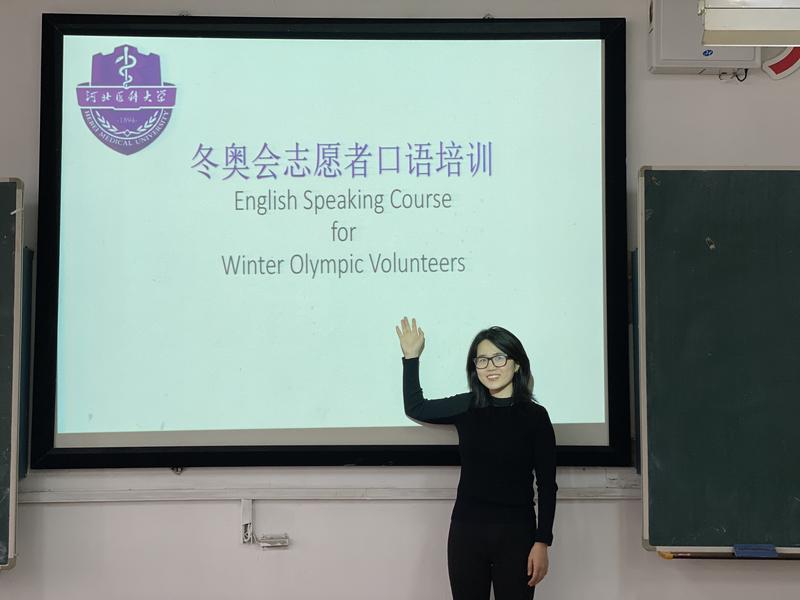 Gao Shang, a volunteer for the 2008 Games, now teaches English at Hebei Medical University. Her students are acting as volunteers for the Winter Games. (PHOTO PROVIDED TO CHINA DAILY)

"I often remind the students that their behavior and professionalism not only matter to the volunteer team but also to the world's perception of China," she said.

Gao added that the new volunteers face greater challenges because of COVID-19 control measures and extreme weather conditions at snow sports venues, but they are fully prepared.

She and fellow volunteers from the 2008 Games have become firm friends. Gao said her colleagues feel proud to see her mentoring the new recruits.

"As the 2022 Games approach, our memories and passion return to the 2008 Olympics, which taught us a lot. Now, it's my students' turn to join the Olympics, and they can always rely on me for support," Gao said.

On Feb 4, the opening ceremony for Beijing 2022 will be broadcast around the world from the Bird's Nest.

Zhang Yimou, chief director for the ceremony, said he never expected to become the first person to direct the Summer and Winter Games and join the ranks of "dual-Olympic talent".

At the 2008 Games, Zhang presented one of the most iconic opening ceremonies in Olympic history.

Yiannis Exarchos, CEO of Olympic Broadcasting Services, said the opening ceremony for this year's Games will be very different from that in 2008, but equally impressive, and should not be missed.

Zhang Yimou said in a recent interview: "I was thrilled to learn I would become a 'dual-Olympic director'. It's different now. China's status in the world, the image of the Chinese, and the rise of our national status－everything has totally changed."

Due to the pandemic, the world needs a new and strengthened vision, with people uniting globally to face difficulties and look forward to a brighter future, he said, referring to the Olympic motto, which has added the word "Together" to "Faster, Higher, Stronger."

"I hope to make a good impression and create some wonderful moments that will go down in history. I want to showcase Chinese people's confidence, pride, love and affection for the people of the world－our great philosophy and values," he added.