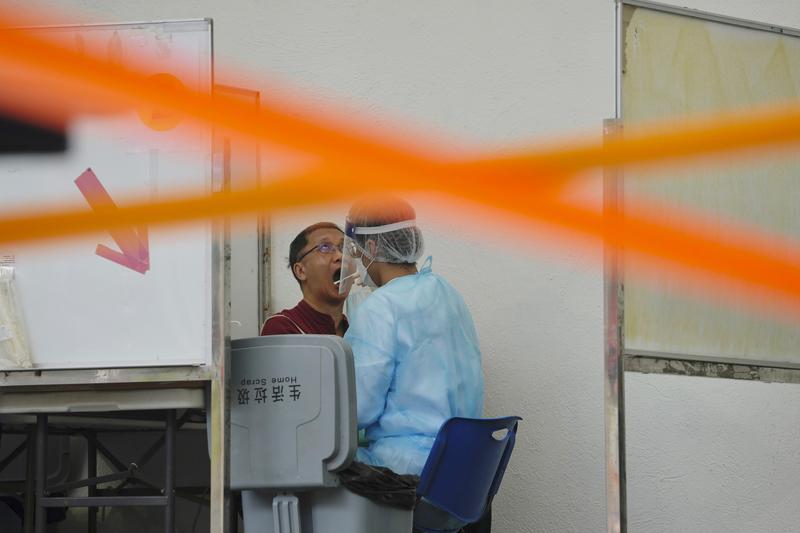 A resident gets tested for the coronavirus in Hong Kong, Jan 23, 2022. The Hong Kong government is encouraging government employees to work from home as far as possible in the wake of recent surge in COVID-19 cases. (KIN CHEUNG / AP)

The Hong Kong government has said that bureaus and departments will implement new special work arrangements, including working from home, starting Tuesday in view of the local pandemic situation.

The Civil Service Bureau has issued guidelines to bureaus and departments requesting them to review demand for their services, and, based on their operational needs, to implement new special work arrangements with a view to reducing the number of staff present at the same time in the office a government spokesman announced on Monday.

The departments concerned will make suitable arrangements and announcements separately. Such arrangements may include allowing some of their staff to take turns to work from home as far as possible, said the spokesman.

While implementing the new arrangement, the offices will generally maintain basic public services and not affect anti-epidemic work, the spokesman added.

Reducing the flow of people in government buildings and offices will help contain the epidemic.

The government will closely monitor the epidemic situation and review the arrangements in due course.

Pointing out that there may be temporary reduction in provision of some of the public services offered by individual departments, the government appealed to members of the public for their understanding should there be any inconvenience caused.

“Reducing the flow of people in government buildings and offices will help contain the epidemic,” said the spokesman.

The government encouraged people to use alternative means, such as the post, drop-in boxes or online channels, to receive the services they need.

The spokesman also reminded people to wear surgical masks at all times when they are entering or are present in any government buildings or offices, and comply with the infection control and social distancing measures implemented by relevant departments including using the "LeaveHomeSafe" mobile app, temperature checks and crowd control arrangements.

The spokesman also appealed to employers to allow their staff members to work from home as far as possible according to their operational needs to significantly reduce the flow of people and social contact in the community.