The world of Nancy Kwan

Hong Kong-born Nancy Kwan was catapulted into the international spotlight as the eponymous lead in the movie classic The World of Suzie Wong. Sixty-one years on, Kwan remains just as charming and active, writing and producing films. Faye Bradley reports.

The World of Suzie Wong paired the previously unknown Nancy Kwan with William Holden, one of Hollywood’s most bankable stars at the time. (PHOTO PROVIDED TO CHINA DAILY)

Hong Kong-born actress Nancy Kwan Ka-shen — often called the Chinese (Brigitte) Bardot for her exquisite talent and grace — was the first actress of Chinese heritage since Anna May Wong in the 1920s to make her mark in Hollywood. Her debut as the eponymous lead in The World of Suzie Wong (1960), directed by Richard Quine and produced by Ray Stark, caused a sensation. Based on Richard Mason’s 1957 novel of the same name, the film tells the story of a Wan Chai prostitute who falls in love with an American artist, played by William Holden. The release of Suzie Wong put an end to Kwan’s original career path: she had been studying at England’s Royal Ballet School when Stark discovered her. An overnight star at 21, Kwan branched out in the years that followed into writing and producing films.

Sixty-one years after her big break, the Eurasian actress, who resides in Los Angeles, continues to appear at events held in her honor. Having received a Lifetime Achievement Award from the Asian World Film Festival in 2019, Kwan was this year inducted into the (California-headquartered) Asian Hall of Fame. Now 82 (although she doesn’t look it) — and a daily practitioner of tai chi and qigong — Kwan recently finished her latest screenplay, Dragon’s Breath, an action romance that touches on the subject of feng shui. “The story takes place in San Francisco and has an all-Asian-American cast,” she explains. 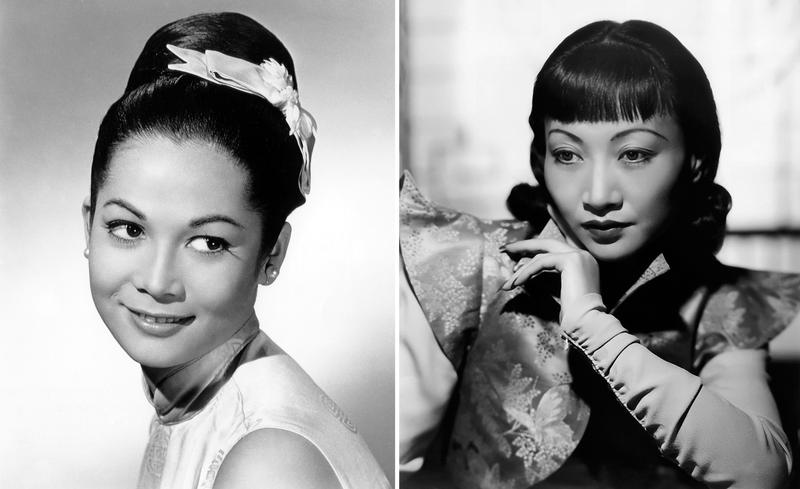 Chinese American actress Anna May Wong (right), who hit the big time in the 1920s, blazed a trail in Hollywood for future actresses of Asian descent such as Nancy Kwan (left). (PHOTOS PROVIDED TO CHINA DAILY)

A product of two cultures

Born in 1939 in Hong Kong, Kwan spent the war years on the Chinese mainland, returning to her native city in 1945. “We lived in a beautiful, white, art deco house on a hill, designed by my father — he was an architect in Hong Kong,” reminisces Kwan. “The Hong Kong I knew in my childhood is another time and another place.”

As a young girl, Kwan was fascinated by the architecture of Maryknoll Convent School, across from her grandfather’s house in Kowloon Tong. She persuaded her father to send her to the Catholic school.

“It must have struck a chord with my father,” she muses. During the war, the Maryknoll priests looked out for her and her family when they were on the mainland. This is where Kwan would make lifelong friends, some of whom she is in touch with to this day. She also believes that being a product of two cultures — that of her Chinese father and British mother — gave her a better understanding of human nature.

“It is Nancy’s authentic embodiment of Asianness and her determined dynamism that breathe air into these characters, making them convincing, relatable, and sympathetic,” says Kiki Fung, program consultant for the Hong Kong International Film Festival.

“A Hollywood musical featuring an almost all-Asian/Asian American cast was something quite remarkable at the time,” she says of Flower Drum Song (1961), Kwan’s second movie. “The film also offers a more realistic portrayal of the struggles of Asian immigrants in the United States.”

The face of Asia

Kwan’s first two films did well, both critically and at the box office. The elegant actress was soon not only a sought-after star, but also a fashion icon. After Vidal Sassoon gave her a stylish bob, the hairstyle came to be known as “the Kwan cut”.

Flower Drum Song, in particular, had succeeded in turning the spotlight on Asian actors in Hollywood. “Only then did Hollywood realize that Asians could carry a film box office in America — after so many years of Caucasian actors playing yellowface (roles),” says Brian Jamieson, director of To Whom It May Concern: Ka Shen’s Journey (2009), a docudrama about Kwan.

His primary reason for making the film was “to tell the story of a remarkable Asian American lady who broke the stereotype and paved the way for Asians to finally be accepted in leading roles in Caucasian films”.

The experiences of Chinese actors in America are explored in works such as the book Hollywood Chinese and documentary To Whom It May Concern, about Kwan’s life. (PHOTOS PROVIDED TO CHINA DAILY)

“After The World of Suzie Wong and Flower Drum Song, Nancy was offered roles that didn’t specify an Asian background, which was groundbreaking, even by today’s standards,” remarks Oscar-nominated filmmaker Arthur Dong. “She played French, Italian, Native American, and British parts, among others.”

Dave Karger, a Turner Classic Movies host, agrees: “Suzie Wong is arguably Nancy’s best-known role, and it’s important because it was a fully fleshed-out Asian leading role, unlike so many of the stereotypical representations of Asians in films at the time, particularly in war-related movies.”

Kwan joined Karger in cohosting a 2020 TCM video series spotlighting Asian Americans in classic Hollywood movies. “Nancy is a great example of a trailblazing performer, someone whose natural talent and charm forced the film industry to create new opportunities,” notes Karger. “But she’s also an example of how classic Hollywood failed non-white actors and actresses. When I spoke with her on TCM last year, she was clearly proud of everything she’d accomplished, but I also detected a bit of disappointment that she wasn’t allowed to do even more.”

Nancy Kwan in conversation with Dave Karger of Turner Classic Movies. The Eurasian actress was Karger’s special guest on the first episode of his series about Asian Americans in Hollywood. (PHOTO PROVIDED TO CHINA DAILY)

An inspiration to many

Meaty roles for Asian actors are still rare in Hollywood, although the racial imbalance is gradually shifting. “There have been a lot of changes in the motion picture industry, especially regarding minorities working in the business,” Kwan says. “There are so many young, talented Asian actors waiting for their chance. Hopefully their time is now!”

Dong, who made the documentary Hollywood Chinese: The Chinese in American Feature Films (2007), points out that actors of Asian descent in Hollywood today — although they are still a small minority — “have more agency to speak up and say ‘no’ when offered demeaning work”. He adds, “some actors, most recently Gemma Chan, have also started their own production companies to develop projects, instead of relying on and waiting for outside forces to call them.”

Recent examples of Hollywood films with all-Asian casts that have found box office success include Marvel’s Shang-Chi (2021) and Crazy Rich Asians (2018), the latter based on a novel by Kevin Kwan, a cousin of Nancy’s. Many Hollywood-watchers feel that at least a part of these recent successes is owed to pioneers like Nancy Kwan.

“Sixty years on and cineastes still talk about the impact Suzie Wong had on the movie-going world,” says Jamieson.