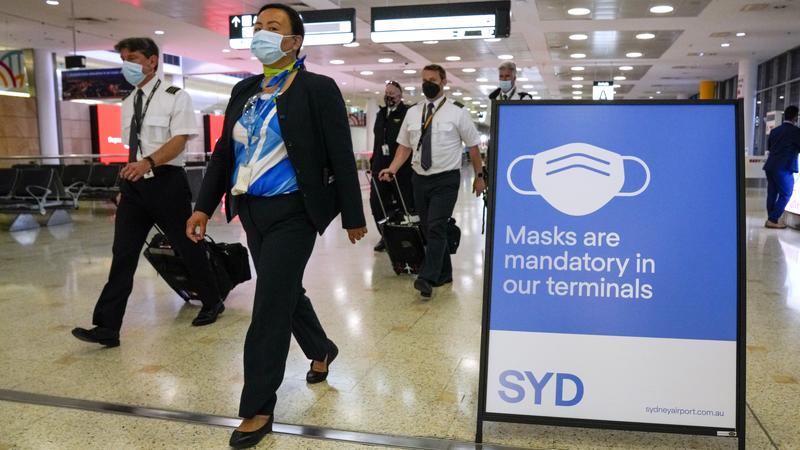 SEOUL / KUALA LUMPUR / WELLINGTON / SINGAPORE / JERUSALEM / ANAKRA / YANGON / MELBOURNE / AHMEDABAD / MANILA / ISLAMABAD - The Omicron coronavirus variant spread in Australia on Saturday, testing plans to reopen the economy as a cluster in Sydney grew to 13 cases and an infection was suspected in the state of Queensland.

Federal authorities are sticking with a plan to reopen the economy on the hope that the new variant proves to be milder than previous strains, but some state and territory governments have moved to tighten their domestic border controls.

Australia reported its first community transmission of Omicron on Friday at a school in Sydney. Authorities are investigating the source and said more cases were expected.

Queensland authorities suspected its first Omicron case in a person who traveled from South Africa and that genome sequencing was ongoing.

"The public health unit have ruled out that it is Delta but we haven't been able to confirm if it is Omicron," state Health Minister Yvette D'Ath. "But it is being treated as if it is."

Authorities in South Australia said on Saturday that arrivals from New South Wales, Victoria and the capital territory will be tested. The state reopened its domestic borders only days ago for the first time in months.

The state of Victoria, home to Melbourne, requires full vaccination to access most hospitality services and non-essential retail, as well as to work in health care and many other industries.

Nearly 88 percent of Australians over the age of 16 have been fully vaccinated, health data showed.

Anti-vaccination supporters number in single digits in Australia, according to polls. But unvaccinated patients make up the vast majority of those hospitalized with the coronavirus. In Victoria, 90 percent of the 44 people in the intensive care have not been fully vaccinated, health data showed. 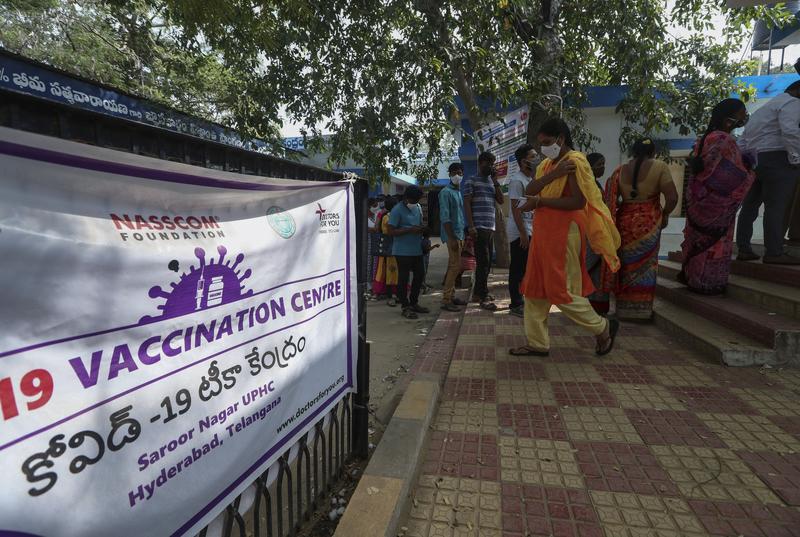 A woman returns after getting inoculated as other line up to register their names to receive COVID-19 vaccine in Hyderabad, India, Dec 2, 2021. (MAHESH KUMAR A. / AP)

Officials in the western state of Gujarat said the patient who tested positive for Omicron was a 72-year old man of Indian origin who had lived in Zimbabwe for decades, and returned on Nov 28.

India expects the Omicron variant to cause less severe illness, due to rising vaccination rates and high prior exposure to the Delta variant that infected nearly 70 percent of the population by July.

The federal health ministry said on Thursday that India had identified two male patients, aged 66 and 46, who had the new strain in the southern state of Karnataka. The first person was a South African national while the second one, an Indian physician, had no recent travel history.

India has fully vaccinated just half of its 944 million adults despite having ample supplies of domestically made shots.

Up to 84 percent have received at least one dose, with more than 125 million people due for a second shot.

The Israeli Ministry of Health on Friday reported four new cases of the Omicron COVID-19 variant in the country.

This raises the total number of Omicron cases in Israel to seven, the ministry noted.

The new cases are of four passengers who have recently returned from South Africa, all of whom are not vaccinated against coronavirus.

The ministry added that there is a high suspicion of another 27 cases of Omicron in Israel, for which the results of a genomic sequencing tests have not yet been received. And 22 of the 27 people were not vaccinated, or recovered more than half a year ago. Eight out of the 27 have recently returned from abroad.

In addition, there are 14 other cases of low suspicion for the variant, as their uncertain test results were sent for re-testing. 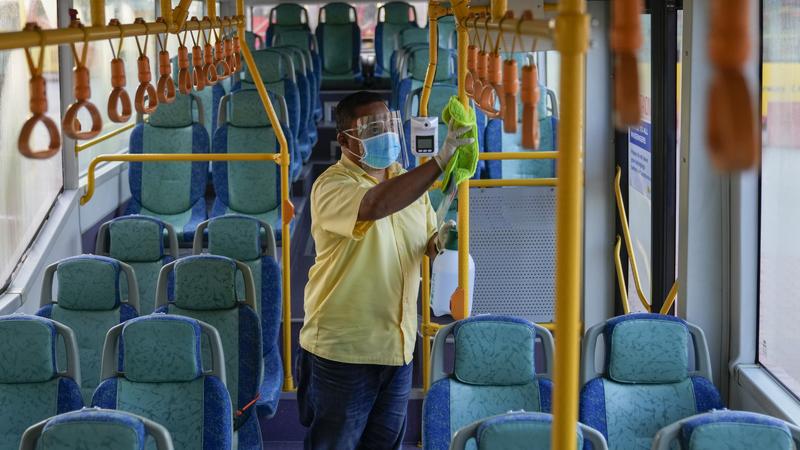 Malaysia reported another 5,551 new COVID-19 infections as of midnight Friday, bringing the national total to 2,649,578, according to the health ministry.

Some 23 of the new cases are imported, with 5,528 being local transmissions, according to data released on the ministry.

Another 17 more deaths have been reported, bringing the death toll to 30,538.

The number of COVID-19 infections has risen to 523,748 in Myanmar after 402 new COVID-19 cases were reported in the past 24 hours, according to a release from the Ministry of Health on Friday.

With seven new deaths, the death toll has increased to 19,127, according to the release.

New Zealand reported 100 new cases of COVID-19, the Ministry of Health said in a statement on Saturday.

Of the 100 new cases of COVID-19 reported, 98 were community cases across New Zealand and two were imported cases at the border, said the ministry.

he total case number of COVID-19 in the current Delta variant outbreak in New Zealand community reached 8,931, mainly in Auckland and peripheral regions, according to the ministry.

New Zealand recorded 12,087 confirmed cases of COVID-19 since the beginning of the pandemic, said the ministry.

The NCOC, a department leading the country's campaign against the pandemic, said that the country had confirmed overall 1,286,453 cases so far.

The pandemic killed eight people on Friday, taking the death toll to 28,761.

The Philippines' Department of Health (DOH) reported 517 new COVID-19 infections on Saturday, pushing the number of confirmed cases in the Southeast Asian country to 2,834,294.

The Philippines has recorded less than 1,000 cases for the 11th straight day. The DOH also reported that 243 more people died from COVID-19 complications, bringing the country's death toll related to the virus to 49,230. 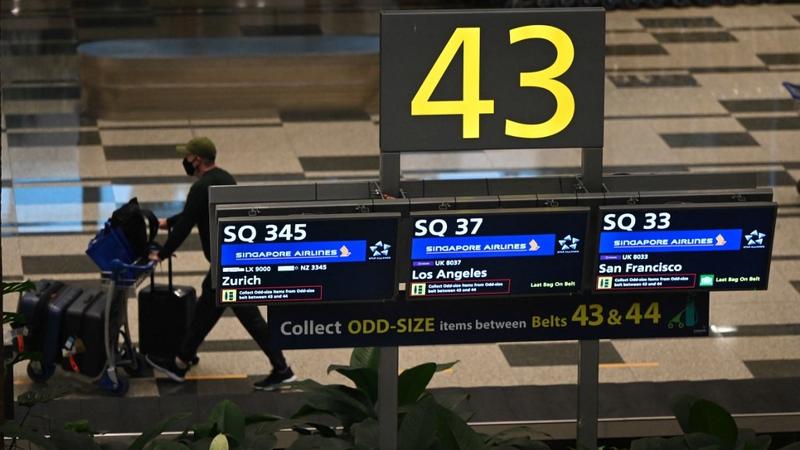 Singapore will require additional testing for travelers and extend travel curbs to more African countries, as it rolls out more measures to allow it time to figure out how to deal with the Omicron coronavirus variant.

All travelers on its so-called vaccinated travel lanes will have to be put on a daily testing regime over seven days using self-administered rapid testing, the Ministry of Health said in a statement on Friday.

This measure, coming into effect from Dec 7, is on top of on-arrival polymerase chain reaction for air travelers, as well as supervised rapid testing at test centers on days three and seven after arrival.

In addition, all long-term pass holders and short-term visitors with recent travel history to Ghana, Malawi and Nigeria within the last 14 days will not be allowed to enter the country, or transit through the city-state, from Dec 5, according to the statement.

“Should the Omicron variant be more transmissible than delta and become the globally dominant variant over time, it is a matter of time before it establishes itself in Singapore,” the statement reads.

It said the extra measures will help to “buy time” to learn more about dealing with Omicron, and to continue with its booster program.

Enhanced testing regime will also apply to vaccinated land travelers coming from Malaysia from Dec 7 and testing regime as well as extension of travel curbs will be in place initially for four weeks.

Singapore reported 766 new cases of COVID-19 on Friday, the Ministry of Health (MOH) said in a press release.

Of the new cases, 738 were in the community, 11 were in migrant worker dormitories and 17 were imported cases, bringing the total tally in the country to 267,916.

Nine more patients have passed away from complications due to COVID-19 infections, bringing the death toll to 744, the ministry said. 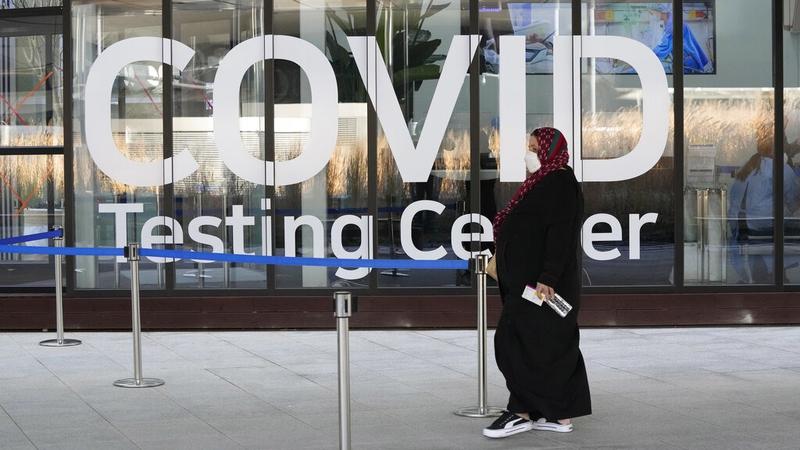 A traveler arrives to enter into a COVID-19 testing center at the Incheon International Airport In Incheon, South Korea on Dec 1, 2021. (AHN YOUNG-JOON / AP)

South Korea reported a record daily 5,352 new COVID-19 infections and 70 deaths, while a nationwide total of nine cases of the Omicron variant have been confirmed, the Korea Disease Control and Prevention Agency (KDCA) said on Saturday.

The government on Friday announced that people visiting restaurants, cinemas and other public spaces will have to show vaccine passes.

It is also reducing the limit on private gatherings to six people in the greater Seoul area, from 10 currently, and to eight from 12 for those residing outside of the capital, starting next Monday.

The hospitalization rate was rising rapidly led by severe cases of COVID-19, with the number of serious and critical patients at 752 as of Friday, KDCA said.

South Korea has also confirmed three additional Omicron cases, bringing the total to nine after a fully vaccinated couple tested positive for the variant after traveling from Nigeria last week.

To fend off the new variant, authorities on Friday announced a 10-day mandatory quarantine requirement for all inbound travelers for two weeks, halting exemptions given earlier to fully vaccinated people.

South Korea has been battling the worst wave of infections since July, when the daily cases stood below 2,000 until the government switched to "living with COVID-19". The cases hit 5,000s for the first time this week, putting a strain on the healthcare system.

The country, which has fully inoculated 91.7 percent of its adult population, has so far reported a total of 467,907 COVID-19 infections, with 3,809 deaths since the start of the pandemic.