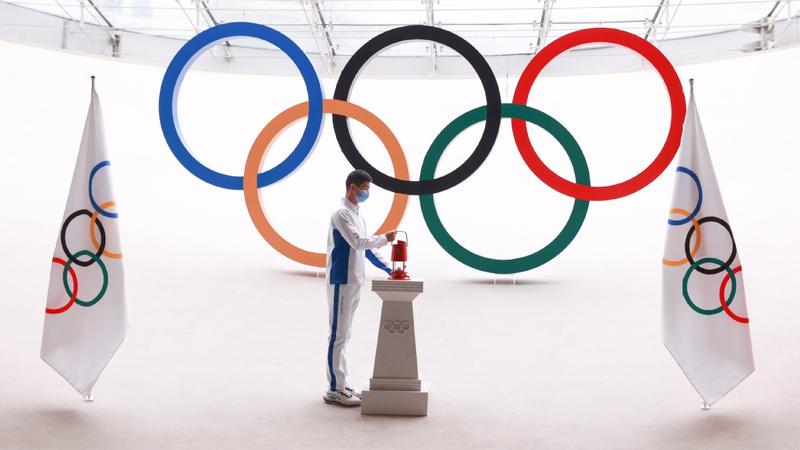 A security guard attends the lantern-changing ceremony of the Beijing 2022 Winter Olympic Games at the Olympic Tower in Beijing on Nov 2, 2021. (PHOTO / IC)

BEIJING - While the world still fights against the COVID-19 pandemic, the 2022 Olympic Winter Games, which conveys a message of hope, courage, peace and unity to the world, has entered the final stage of preparations.

But a minority of western politicians have called for a diplomatic boycott that violates Olympic values and contradicts what the Olympic Movement stands for.

The Olympic Movement aspires to contribute to a peaceful future for mankind through sport as it brings athletes from all over the world together for the greatest sporting event, the Olympic Games.

The Olympic Movement aspires to contribute to a peaceful future for mankind through sport as it brings athletes from all over the world together for the greatest sporting event, the Olympic Games

Looking back at the history, the Olympic Movement has always been accompanied by anti-war activities, peace and depoliticization. Peace and friendship have thus become the inherent nature of the Olympic Games.

Over the past 100 years since the birth of the modern Olympics, the basic principles and core values of the Olympic Games have remained unchanged despite amendments to the Olympic Charter, which indicates the goal of Olympism is to place sport at the service of the harmonious development of humankind, with a view to promoting a peaceful society concerned with the preservation of human dignity.

The Olympic Charter has further explained that sports organizations within the Olympic Movement shall apply political neutrality, and oppose the misuse of sports and athletes for any political or commercial purposes.

"Sport and the Olympic Games in particular, can serve as a model example, where people, nations, athletes and teams take part without discrimination of any kind, such as race, color, sex, language, religion, political or other opinion, national or social origin, birth or other status," International Olympic Committee (IOC) president Thomas Bach has said.

Former United Nations Secretary General Ban Ki-moon has also weighed in on the topic. "Sports by its nature may be competitive, but sports can be a very powerful tool and vehicle to promote dialogue and peace and reconciliation."

That is why the diplomatic boycott that some western politicians have called for is rejected by those who love the Olympic Movement and appeal for peace.

World Athletics president Sebastian Coe believes a diplomatic boycott of the Beijing 2022 Winter Olympics would only serve as "a meaningless gesture" and would be "very damaging".

"We are working for sport and for the athletes and we will do our best to have a very good Winter Olympic Games," said Ilic. "This is what is important."

"Sport is ready to contribute to building a more human-centered and inclusive society," said Bach on April 6, the International Day of Sport for Development and Peace. "This crisis has made it clearer than ever that sport is the low-cost, high-impact tool par excellence for all countries in their recovery efforts."

More than ever, the world needs solidarity in the face of crisis. The Olympic motto "Faster, Higher, Stronger" was revised for the first time in more than 120 years in July this year, with the inclusion of "Together" to recognize the importance of solidarity.

It clearly resonates with the Beijing 2022 organizers as "Together for a Shared Future" was chosen as the official motto for the event.

With the world still grappling with the COVID-19 pandemic, the two mottoes spoke volume for the determination and courage of people around the world to work together to overcome difficulties and pursue their dreams and hopes. The so-called diplomatic boycott therefore runs counter to the trend of world development.