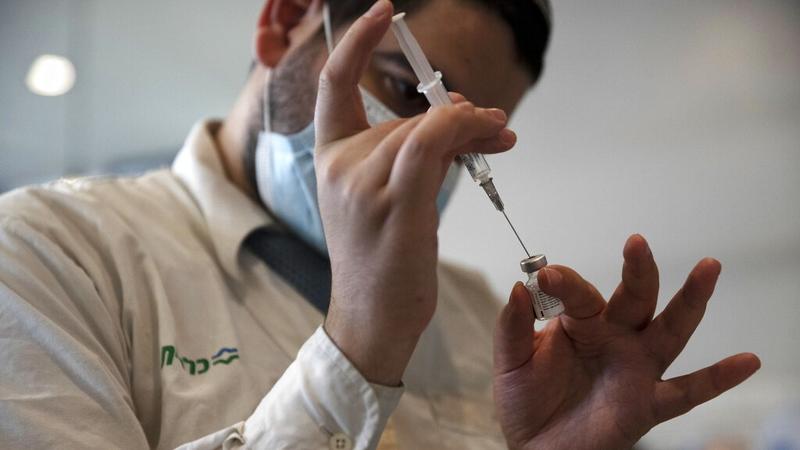 The study was co-conducted by the KI Research Institute in central Israel and KSM, the research and innovation institute of Israel's second-largest health maintenance organization Maccabi Healthcare Services (MHS).

Leveraging the centralized computerized database of MHS, the study assessed the correlation between time-from-vaccine and incidence of breakthrough infection, or infection after vaccination, in a follow-up period from June 1 to July 27.

When stratifying the results by age, the study found a similar trend across all age groups.

Besides, individuals vaccinated in January had a 2.26-fold increased risk for breakthrough infection compared to those vaccinated in April, said the study. 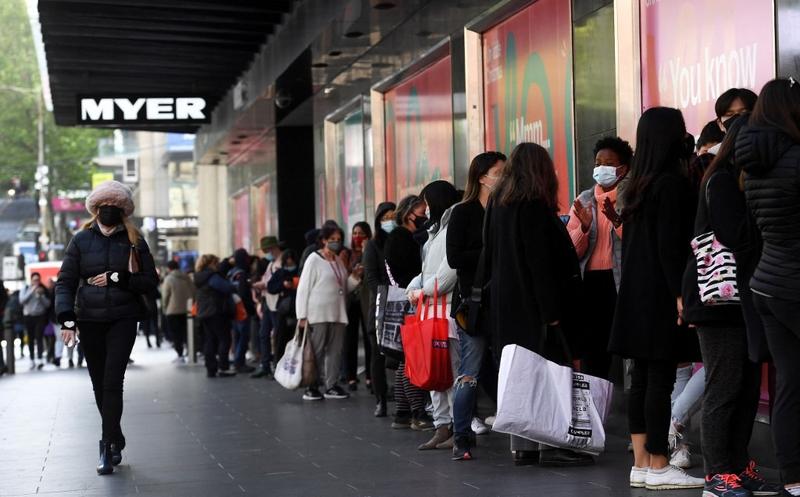 People queue outside a department store in Melbourne on Oct 29, 2021 as the city further lifts COVID-19 restrictions allowing non-essential retail shops to open and travel to the regions of Victoria after the city's sixth lockdown. (WILLIAM WEST / AFP)

Melbourne's pubs and cafes can have unlimited patrons from Thursday night, while stadiums can return to full capacity as authorities lifted nearly all remaining COVID-19 restrictions for the vaccinated residents in Australia's second-largest city.

Victoria, the state that is home to Melbourne, has been gradually easing curbs when dual-dose inoculations reached 70 percent, 80 percent and 90 percent, with the latest relaxations part of a shift in strategy towards living with the coronavirus.

The full vaccination level for the eligible population is expected to reach 90 percent over the weekend.

"Your life will be back to normal, you will be able to enjoy all the things that you have yearned for and missed," State Premier Daniel Andrews said during a media conference.

Under more relaxed rules, people can hit the dance floor and there will be no limits on home gatherings. But masks will remain mandatory in health facilities, public transport and retail stores.

However, in the Northern Territory (NT), Chief Minister Michael Gunner warned that the coronavirus outbreak in the region's indigenous Australian community is at a critical point.

The NT reported eight new COVID-19 cases on Wednesday and zero infections on Thursday, with the number of cases linked to the current outbreak remaining at 19.

However, Gunner said he was expecting more cases in the coming days with close contacts yet to be tested, and the virus would "take lives in the territory before the year is out."

The latest outbreak was identified on Monday, plunging the town of Katherine and remote Aboriginal community of Robinson River into lockdown.

India's central state of Madhya Pradesh on Wednesday became the first state in the country to lift all COVID-19 restrictions.

However, COVID-19 Appropriate Behaviour (CAB), including wearing masks and ensuring social distancing, will continue to be observed by people in the state.

Madhya Pradesh State Chief Minister Shivraj Singh Chouhan said that the pandemic situation was under control as only five new cases were reported in 24 hours, and the number of active cases also fell to 78.

Now all activities, including political, social, sports, entertainment, cultural and religious, will take place at full capacity in the state, he said and added that weddings can take place with as many guests as wished by the families.

India's national COVID-19 tally rose to 34,478,517 on Thursday, as 11,919 new cases were registered during the past 24 hours across the country, showed the federal health ministry's latest data.

Besides, 470 deaths due to the pandemic since Wednesday morning took the total death toll to 464,623. 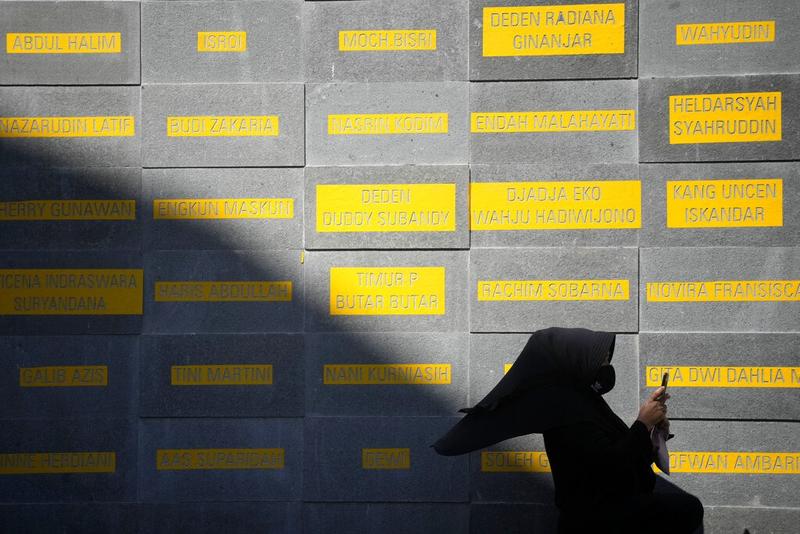 A Muslim woman uses her phone as she walks by names of health care workers who died of COVID-19 engraved on Pandemic Heroes Monument, in Bandung, West Java, Indonesia on Oct 12, 2021. (DITA ALANGKARA / AP)

The government will impose “Level 3” curbs, just one level below the strictest measures, nationwide from Dec 24 until Jan 1, he was quoted as saying during a briefing on Thursday.

That would include full work-from-home order for non-essential sectors, 25 percent capacity limit for malls and no dine-in at restaurants without outdoor seating.

Indonesia on Wednesday confirmed 522 new COVID-19 cases, raising its total tally of infections to 4,251,945, according to the country's Health Ministry.

The ministry reported that the death toll from the virus in the country rose by 13 to 143,698.

The Lao Ministry of Health on Thursday reported a new high of 1,401 new COVID-19 cases, up 95 compared to the previous record of 1,306 cases on Tuesday.

Among the new cases, 1,384 were local infections, raising the total caseload to 58,798, Deputy Director General of the Department of Communicable Diseases Control under the Lao Ministry of Health, Sisavath Soutthaniraxay, told a press conference in Lao capital Vientiane.

Four new deaths have been recorded over the past 24 hours, taking the total death toll to 116, Sisavath added. 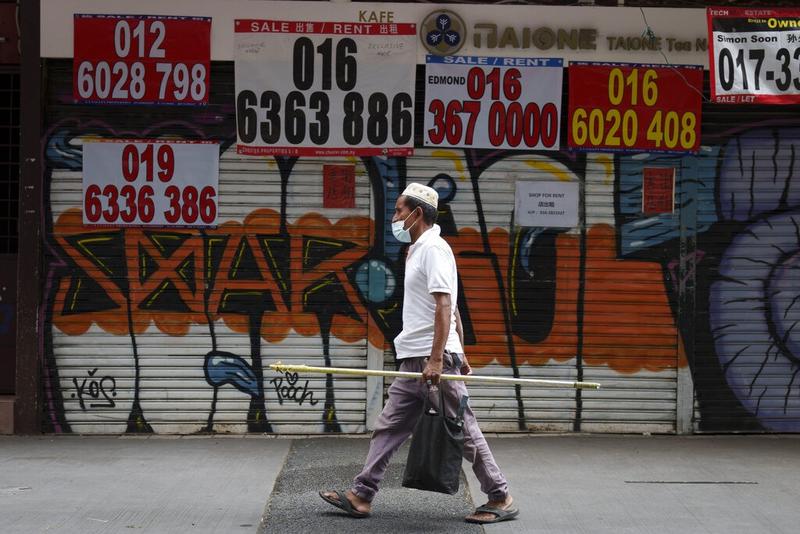 A man wearing a face mask walk in front of a closed store front with advertisements for property rentals in downtown Kuala Lumpur, Malaysia on Oct 18, 2021. (VINCENT THIAN / AP)

Malaysian regulators on Wednesday announced the conditional approval for use of the CoronaVac COVID-19 vaccine developed by the Chinese pharmaceutical company Sinovac Biotech as booster shots for those aged 18 and above.

Health Ministry Director-General Noor Hisham Abdullah said in a statement that the Sinovac booster shot will be administered for targeted groups from three to six months after receiving the first two shots.

Malaysia reported another 6,288 new COVID-19 infections as of midnight Wednesday, bringing the national total to 2,563,153, according to the health ministry

Over 10 million people had been fully vaccinated against COVID-19 across Myanmar as of Tuesday, according to a release from the Ministry of Health on Wednesday.

Over 5 million people had received their first jab of COVID-19 vaccines as of Tuesday, the release said.

According to the ministry's figures, Myanmar reported 843 new COVID-19 cases on Wednesday, bringing the tally to 515,559.

The death toll stood at 18,975 on Wednesday after 12 more deaths were reported in the past 24 hours.

A shipment of 100,000 doses arrived Thursday from Australia and is meant for those who can’t have the Pfizer vaccine for medical reasons, and for those who would like an option, he said.

New Zealand reported 167 new Delta variant cases of COVID-19 in the community on Thursday, bringing the total number of confirmed cases in the country's community outbreak to 6,334.

The ministry also reported the deaths of two patients with COVID-19. 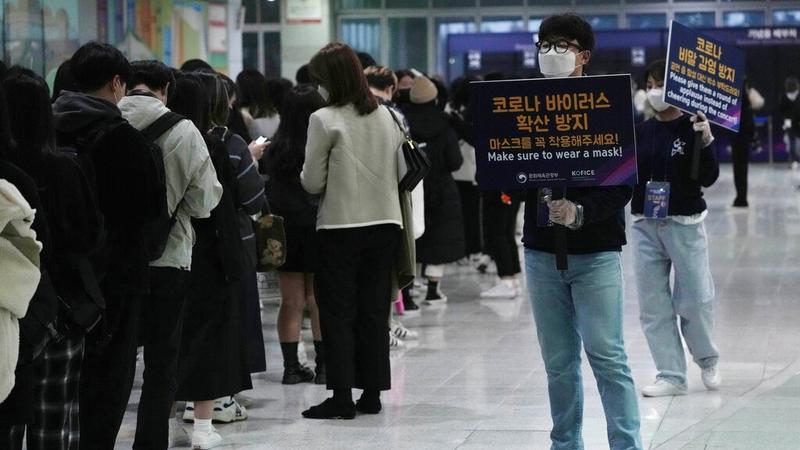 Guides hold notices about precautions against the coronavirus as people wait to watch the 2021 World K-Pop Concert at the KINTEX convention center in Goyang, South Korea on Nov 14, 2021. (AHN YOUNG-HOON / AP)

South Korea reported a record high 3,292 new COVID-19 cases, the Korea Disease Control and Prevention Agency (KDCA) said on Thursday, as the country moves into the first phase of its "living with COVID-19" with loosened restrictions.

A rise in cases was predicted by officials and experts after many social distancing restrictions were lifted earlier this month after the country surpassed its goal of vaccinating 70 percent of its 52 million people. More than 78.5 percent are now fully vaccinated, including more than 90 percent of adults.

The KDCA says a rise in serious cases is also being driven by the waning effects of coronavirus vaccines provided to vulnerable groups such as the elderly earlier on in the process, leading to an increase in breakthrough infections.

As of Thursday there were 506 serious cases, down slightly from an all-time high 522 reported a day before.

To blunt that spike the KDCA said on Wednesday it has decided to shorten the dosing interval for booster shots for people aged 60 or older and those who live or work at nursing homes and other vulnerable facilities to four months.

Sri Lanka's health authorities have begun administering third doses of the COVID-19 vaccine on people aged 60 and above in the South Asian country.

The booster dose administration started on Wednesday in Western and Southern Provinces and the Anuradhapura and Ampara Districts.

Doctors on the ground told Xinhua that the Pfizer vaccine is used as the booster dose, and that all people in the cited age group can visit their nearby vaccination centers with their vaccine cards to take the third shot, regardless of whatever vaccine they received as the first or second dose.

The first and second doses administered in Sri Lanka were the Sinopharm, Sputnik V, Moderna, Pfizer and AstraZeneca vaccines.

Health officials said people over 60 are eligible for the booster dose if it has been three months since they received the second dose. 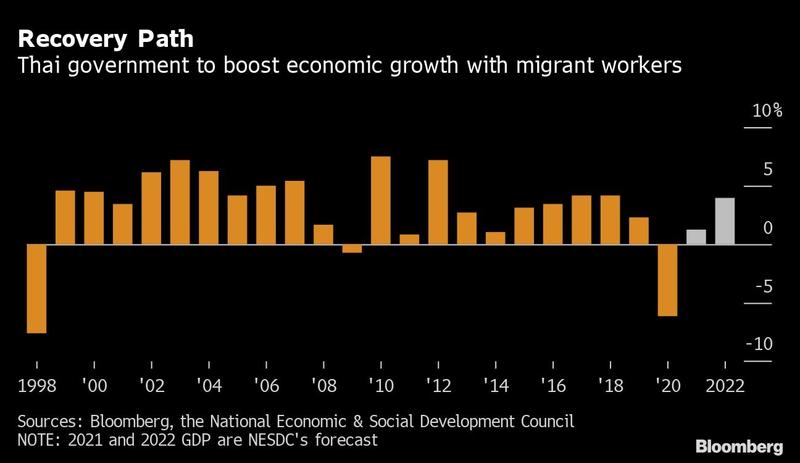 Thailand plans to allow more foreign workers into the country starting next month to fill a labor shortage that has hurt manufacturers and poses a risk to an economy that’s just starting to recover from the COVID-19 outbreak.

The government is allowing illegal workers now in Thailand to register by the end of the month to assess how many more people to allow in from neighboring countries, such as Myanmar, Cambodia and Laos.

Labor Minister Suchart Chomklin said he expects about 100,000 will be counted, with the overall shortage estimated at about 300,000.

“We will start prosecuting illegal workers from next month because we can’t take any risks that will lead to any new outbreak,” Suchart said. Thailand had about 2.5 million foreign workers before the pandemic, with at least one-fifth having left the country since the start of the pandemic.

Prime Minister Prayuth Chan-Ocha has faced a dilemma between supporting the nascent economic recovery with migrant workers and containing the virus, with many foreign laborers infected because they lived in crowded camps and had limited access to vaccinations.

The economy contracted 6.1 percent last year, the most in more than two decades. It’s forecast to expand by about 1.2 percent this year.

The Federation of Thai Industries said manufacturers need at least 500,000 foreign workers, with focus on the construction and food sectors.

Thai Union Group Pcl, owner of Chicken of the Sea and John West seafood brands, reported a 5.8 percent year-on-year drop in its third-quarter profit, citing supply-chain disruption and limitations on its workforce during the outbreak.

The government plans to bring in more workers under memorandum of understandings with neighboring countries. Migrants will be required to quarantine for as many as 14 days and pass RT-PCR tests. The prime minister asked the Health Ministry to set aside 500,000 doses of vaccines for those workers, Suchart said. 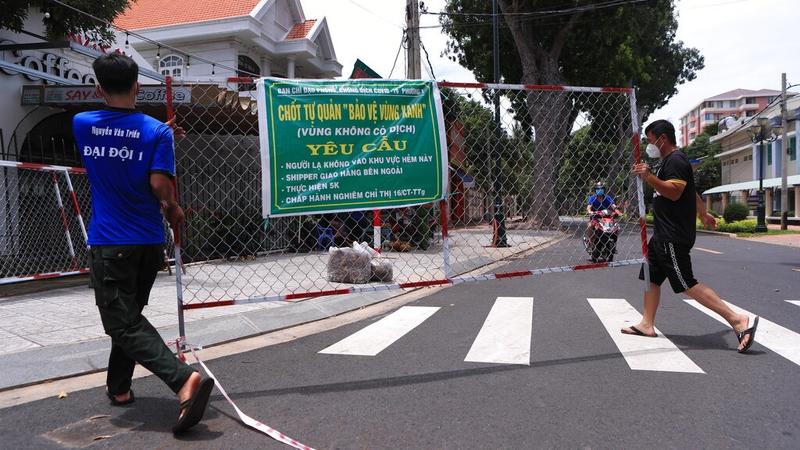 The arrivals came from Australia, France, South Korea, and the United States, and will go on a package tour covering flights and accommodation in Quang Nam as part of a quarantine waiver for visitors fully vaccinated against COVID-19, local media VnExpress reported.

he province is scheduled to welcome some 300 other foreign tourists in the next few days under the vaccine passport program which is being piloted by the Vietnamese government.

All tourism staff at resorts and tourist facilities chosen for the trial program have been fully vaccinated, according to provincial authorities.

The central province, home to popular tourist spot Hoi An ancient town, is one of the first five localities allowed to welcome back fully vaccinated tourists from November onwards along with the northern Quang Ninh province, the central Da Nang city and Khanh Hoa province, and the southern Kien Giang province.

Also under the program, the island city of Phu Quoc in Kien Giang will welcome some 200 foreign tourists on Saturday, the first international visitors to the island after nearly two years of tourism freezing due to COVID-19, Vietnam News Agency reported.

Vietnam closed its border and grounded all international flights in March last year due to the COVID-19 pandemic, only allowing entry for Vietnamese repatriates, foreign experts and highly-skilled workers with certain quarantine requirements.