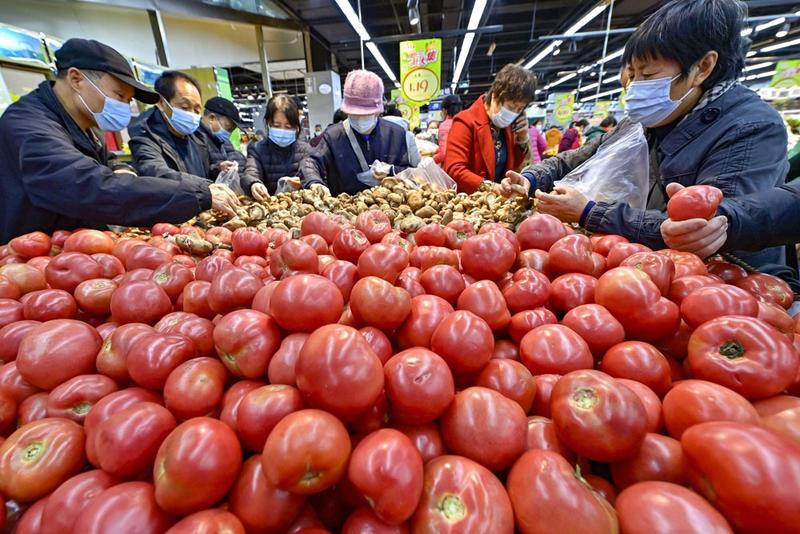 Customers shop in the produce section of a supermarket in Qingzhou, Shandong province, on Nov 10, 2021. (WANG JILIN/FOR CHINA DAILY)

China's rising factory-gate inflation may lose some momentum after hitting a record high in October and mitigate the cost pressure facing the economy over the coming months, experts said on Wednesday.

The producer price index, which gauges factory-gate industrial goods prices, rose 13.5 percent year-on-year last month, up from 10.7 percent in September and reaching a record high, the National Bureau of Statistics said on Wednesday.

Dong Lijuan, a statistician at the bureau, said the rising PPI is attributable to higher international oil prices and the tight domestic supply of energy and raw materials.

Meanwhile, the growth in the consumer price index, a main gauge of inflation, remained mild at 1.5 percent year-on-year last month, up from 0.7 percent in September amid rising vegetable prices, the bureau said.

The widening divergence of PPI and CPI points to prominent structural problems facing the economy. Inflationary pressure on the industrial goods front and downward pressure on economic growth both emerged.

The readings combined to send the difference in PPI and CPI growth to a record high of 12 percentage points, an indication that the profits of midstream and downstream enterprises have been further squeezed, which limited their capability to invest, experts said.

But the PPI growth may have neared its peak and is likely to go down with fluctuations in the coming months, Tang said, given the narrowing room for further spikes in international oil prices and domestic measures to safeguard energy supplies and raw material production.

The average price of thermal coal at main domestic ports dropped to about 1,094 yuan ($171) per metric ton as of Tuesday, versus 1,362 yuan by the end of October, according to CITIC Securities.

Lu Ting, Nomura's chief China economist, said year-on-year PPI growth may drop to 11.6 percent in November, due to the contained rise in coal prices and falling investment demand amid a weakening property sector.

Some are more cautious and believe it remains possible for industrial goods prices to further increase. A Chasing Securities report said the PPI growth may go up to 14.2 percent in November due to the global energy shortage and a cold winter.

Against the complex situation of global inflation, experts said it is necessary for the Chinese government to continue stabilizing energy and commodity supplies and strengthening fiscal and monetary support for hard-hit downstream enterprises.

"On top of the relending funds for smaller businesses that are in place and the newly approved tax deferral, more targeted measures including tax and fee cuts and financial support are needed to help tide smaller, downstream businesses over difficulties," said Wang Jingwen, a macroeconomic researcher at China Minsheng Bank.

There have been signs that monetary conditions have turned more supportive of credit expansion and economic growth. New social financing, or funds the real economy received from the financial system, stood at 1.59 trillion yuan in October, up 197 billion yuan year-on-year, the People's Bank of China, China's central bank, said on Wednesday.

In addition, the broad money supply, or M2, came in at 233.62 trillion yuan by the end of October, up by 8.7 percent year-on-year and faster than the 8.3 percent growth a month earlier, the PBOC said.