By Chen Meiling in Beijing and Yang Jun in Guiyang 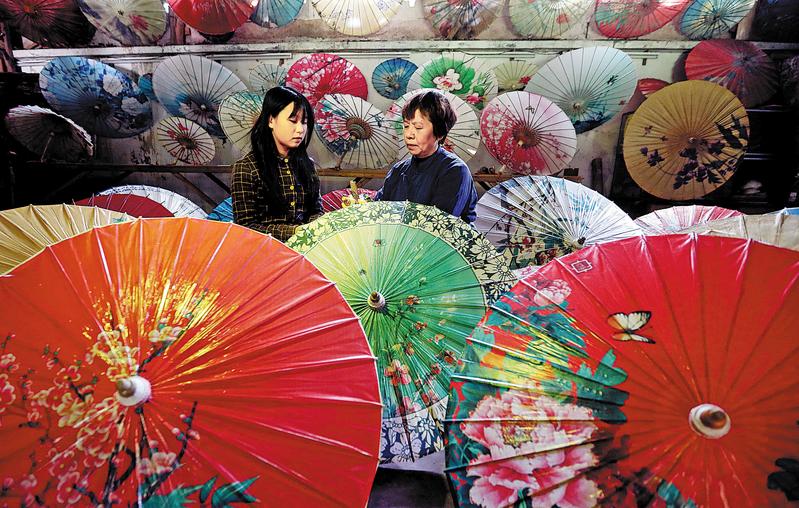 In the late 1960s, when Li Zhenxia was 5, she dreamed of buying the beautiful, red oilpaper umbrella in a store next to her grandmother's house. It was too expensive for her family to afford one at the time.

When she was 10, she watched a young Miao bridegroom pass by her village house on his way to pick up his bride. He and his companions were carrying six red oilpaper umbrellas, and the image touched her heart. When she was in high school, her physics teacher would arrive with an oilpaper umbrella every time it rained. She and the teacher became good friends.

In 1996, Li's dream of oilpaper umbrellas came true when she started learning how to make them for herself. Two years later, she produced her first one. Of course, it was red.

Today, Li is an entrepreneur and an intangible cultural heritage inheritor, and she enjoys talking to her customers and passing on her techniques to apprentices.

"The oilpaper umbrella is like my lover; it has been with me my whole life and always makes me feel better," the 58-year-old said.

The traditional Chinese handicraft, which is made of bamboo and paper coated in the oil of the tung nut for waterproofing, has been around for at least 1,000 years and was eventually adopted in other parts of Asia. Both ceremonial and practical, it was used on rainy days, as well as during weddings and religious ceremonies. Usually exquisitely patterned and now more decorative than functional, it is often found for sale at tourist sites or in hotels as decorations. 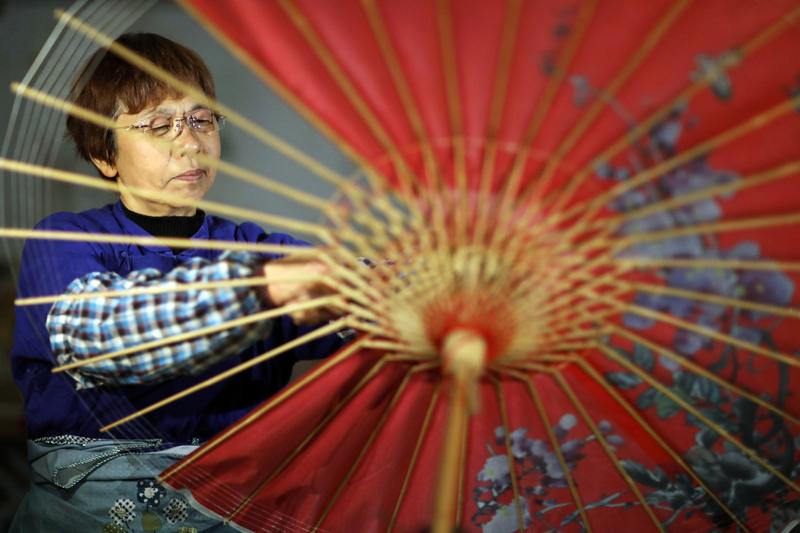 Li works on an oil paper umbrella at her store. (WANG CHANGYU FOR / CHINA DAILY)

Li's store in Datong ancient town in Chishui city, Guizhou province－a town where there is a lot of rain－welcomes curious, nostalgic tourists who buy her umbrellas to model in photos, decorate their homes or add to collections, and sometimes even to use for catwalks at shows and performances.

"It's more a piece of art that adds elegance and grace than a means of protection from the rain," she said.

Production involves over a hundred individual steps, from cutting the bamboo and threading the pieces together, to pasting on the paper shade, drying it in the sun and brushing it with oil. The whole process takes between 15 days and several months, depending on the umbrella's design, and this complexity means that it's still made by hand.

But she is no stranger to difficulties. Li's husband made his living as a root carver, and she was once forced to give up her business and go to Beijing as a migrant worker because they were not making enough to feed elderly family members and their three children.

"At the time, few people bought oilpaper umbrellas because cheaper umbrellas had caught on," she said. "None of my family supported my wish to continue."

In 2009, she won third prize at a provincial contest for craftsmen, which boosted her confidence. Afterward, she worked for two years with a TV opera crew sewing sheets and duvet covers, which brought her between 100 to 200 yuan a day. In 2012, she borrowed money and took out loans to open her store. At the time, her husband had just been diagnosed with heart disease.

"I told him not to worry and that I could make money from my hobby," she said. In 2016, he passed away. Out of love and to assuage her grief, Li poured all her energy into the umbrella business. 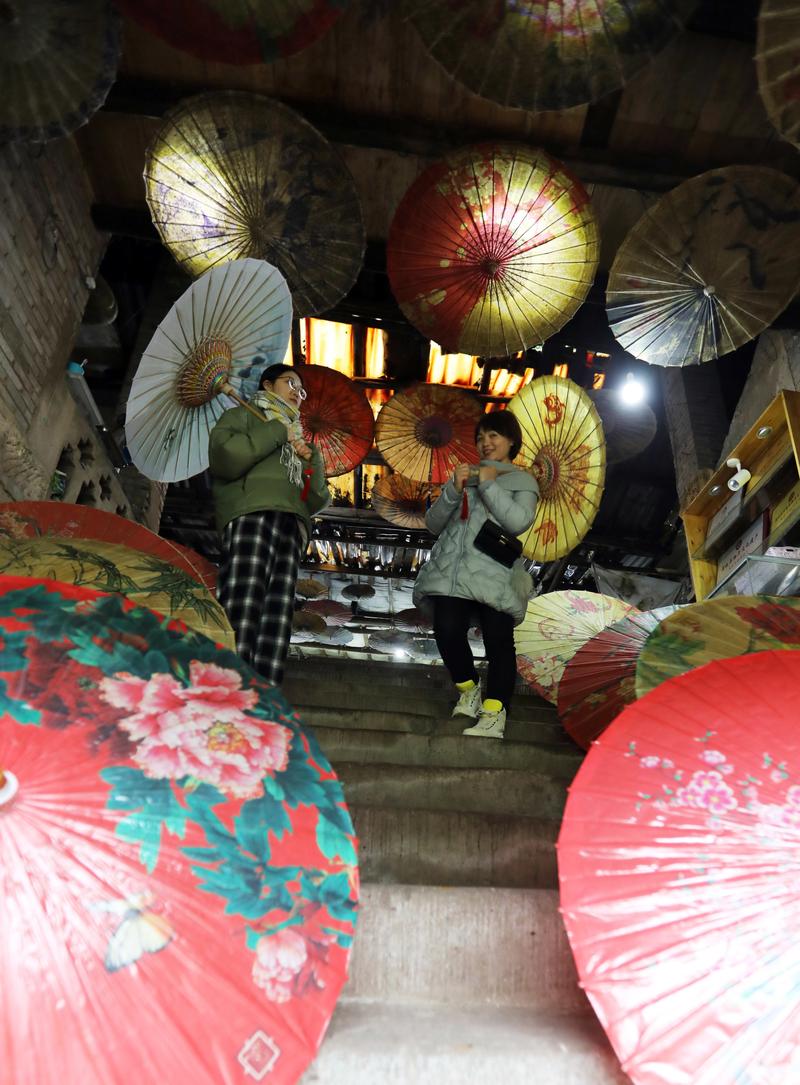 She had never forgotten that red umbrella in her grandmother's neighborhood store, an object so beautiful, that the 5-year-old girl couldn't take her eyes off it.

"It cost 2 yuan. My parents earned 0.5 yuan a day. It was impossible to buy that kind of luxury," she said. "So it became my lifelong obsession."

Now Li has two more stores, one in Danzhai in Guizhou and another in Sichuan province. Of her three children, only her eldest son, who is 36, helps with the business, running the store in Danzhai. Her daughter is married in Beijing, while her youngest son is a Grade-3 high school student. Li hopes he will major in art and help her design umbrellas in the future.

Over the years, she has had several apprentices but most are no longer in the business. "When a craftsman has to worry about food and clothing, they cannot work wholeheartedly. I like to teach, but few want to learn," she said.

One of her students, a teenage girl from a single parent family of five children, dropped out of school, because they were too poor for her to continue. Li offered her accommodations and training. The girl was a good learner, but after a year, her mother passed away, and as the firstborn, she was forced to find other work to support the family.

Li recruits locals, mostly unemployed women from nearby villages. She takes her umbrellas to exhibitions, and maintains contact with other intangible cultural heritage inheritors. But most of time, she prefers to sit drinking tea, making umbrellas and talking to fellow umbrella lovers from all over.

One of her regulars, a 38-year-old woman surnamed Cai, has bought eight oilpaper umbrellas from Li since 2016. She uses them on rainy and sunny days, matching them with her outfits. "It is a classic item with great cultural meaning. I don't use ordinary umbrellas anymore," Cai said. "I like Li's hand-painted umbrellas. They're pretty, good quality and nicely priced. She offers free maintenance, too."

Wang Jin in Guiyang contributed to this story.