Developing nations can learn from China to meet SDGs 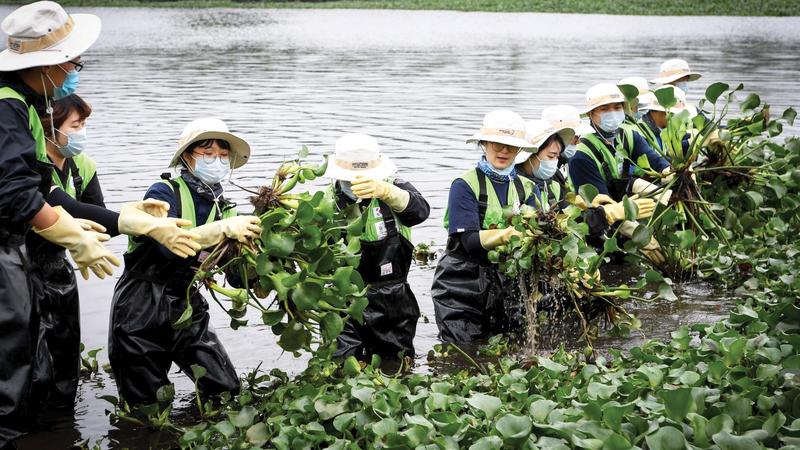 People clean up water hyacinth in Hainan province, one of the UNDP’s projects to protect water sources. (PHOTO PROVIDED TO CHINA DAILY)

China can leverage its expertise and resources to help developing countries meet their sustainable development goals (SDGs), as the pandemic continues to weigh on global efforts to eliminate poverty, inequality and conflict, analysts said

This is especially crucial as China observes the 50th Anniversary of the Restoration of its Lawful Seat in the United Nations on Oct 25. Analysts said China can mark this important milestone by leveraging its experience in poverty alleviation, green development and international cooperation to meet the SDG targets.

The sustainable development goals, which were approved in 2015 by 193 members of the United Nations, is a blueprint for addressing the world's most pressing problems by 2030

The SDGs, which were approved in 2015 by 193 members of the United Nations, is a blueprint for addressing the world's most pressing problems by 2030. The SDGs comprise 17 goals and include the eradication of extreme poverty, halting deforestation, promoting gender equality and reducing conflict.

“Given the resource constraints, some countries may find it challenging to factor in social, environmental, and economic sustainability in their respective development targets,” said Nawazish Mirza, professor of finance at the Excelia Business School in France.

Mirza said a collaborative effort is needed to meet SDGs and ensure global prosperity and as such, China’s support can be instrumental especially for developing countries.

He cited China’s economic reforms in the last 40 years and how these policies promoted economic growth and lifted more than 700 million people out of poverty. Other developing countries can learn from China’s policies on poverty alleviation and social protection, Mirza said.

He said China’s pursuit of low-carbon growth can be a model to other countries that wish to do the same and, in the process, meet one of SDG’s targets: cutting emissions by 45 percent by 2030 to limit global warming to well below 2 degrees Celsius.

“China is concentrating on promoting renewable energy and smart grids while limiting fossil fuel consumption. The model can help other countries establish low-carbon cities and green transport systems,” he said.

China aims to reduce energy consumption per unit of GDP and carbon dioxide emissions per unit of GDP by 13.5 percent and 18 percent, respectively. This was emphasized under the nation’s 14th Five-Year Plan (2021-25).

Rajiv Biswas, Asia Pacific chief economist at global consultancy IHS Markit, said China plays a key role within the UN by helping other developing countries on their path toward achieving the SDGs. This includes providing development financing through multilateral and bilateral assistance, as well as sharing technical knowledge and expertise in a wide range of economic development projects.

Mirza said China-led initiatives like the China-UN Peace and Development Fund and South-South Cooperation Assistance Fund, which were both established in 2015, have been helping developing countries to achieve their SDGS.

Since its establishment six years ago, China has provided a total of $120 million to the China-UN Peace and Development Fund. The fund has supported 95 projects in Asia, Africa, Latin America and Oceania, according to the Chinese Ministry of Foreign Affairs (MFA).

The MFA said the South-South Cooperation Assistance Fund has supported over 100 livelihood projects in more than 50 countries. The projects include response to tropical cyclones, the fight against Ebola and COVID-19, promoting maternal and child health and addressing refugee and migrant crises.

Six years after the SDGs were adopted by UN members in 2015, most countries continue to lag behind, especially in the areas of poverty eradication, climate action, reducing inequality and ending hunger.

In 2017, the number of people living on less than $1.90 per day dropped to 689 million from 741 million in 2015. Due to the pandemic, that figure is expected to have increased again in 2020, with an estimated 738 million people living in extreme poverty in 2020, according to the latest SDG progress report published by the UN in July 2021.

The UN also reported that between 720 and 811 million people in the world faced hunger in 2020, an increase of as many as 161 million from 2019. The prevalence of undernourishment increased from 8.4 percent in 2019 to 9.9 percent in 2020. Hunger affects 21 percent of the population in Africa, while more than half of the world’s undernourished are found in Asia.

Violence against women persists, with one in three women (or 736 million) estimated to have been subjected to physical and or sexual violence at least once.

While the pandemic has slowed down global economic growth, concentrations of greenhouse gases continued to increase in 2020. The UN said 2020 was one of the three warmest years on record, with the global average temperature about 1.2 degrees Celsius above the 1850-1900 baseline.

It is against this backdrop that China’s support is much needed, as it can use both its wide experience and resources in meeting SDGs, analysts said. This is even more urgent as the UN General Assembly has proclaimed this decade as a “Decade of Action” to meet the 2030 SDG targets, while ensuring that no one is left behind.