Under the baton of conductor Li Biao, Beijing Symphony Orchestra and the Jingju Theater Company of Beijing will kick off a 7-city nationwide tour with the Peking Opera symphonic suite, Grand Canal of Beijing City.

The Grand Canal, the 3,200-kilometer-long, 2,500-year-old waterway connecting Beijing and Hangzhou in what is now East China's Zhejiang province, is a UNESCO World Heritage Site and the longest artificial waterway in the world. It consists of three sections built in different periods, unifying the powerful northern and the fertile southern regions of ancient China.

The concert will be staged in various cities, up to Dec 18, including Nanjing and Suzhou in Jiangsu province, Hangzhou and Shanghai.

"The music combines Western classical and Peking Opera, which is a creative idea and offers the audiences a fresh experience," says conductor Li. "The chemistry between classical music and Peking Opera is beyond our expectation and we are looking forward to sharing the show with audiences in more cities."

Eighteen star performers of the Jingju Theater Company of Beijing, including Du Zhenjie, Chi Xiaoqiu, Hu Wenge and Fang Xu, perform in the show, and will display their solid grasp of different styles of Peking Opera singing.

Peking Opera, or jingju, has a history of more than 200 years and was recognized as an Intangible Cultural Heritage of Humanity by UNESCO in 2010. It brings together art forms such as singing, dancing, martial arts and acrobatics. 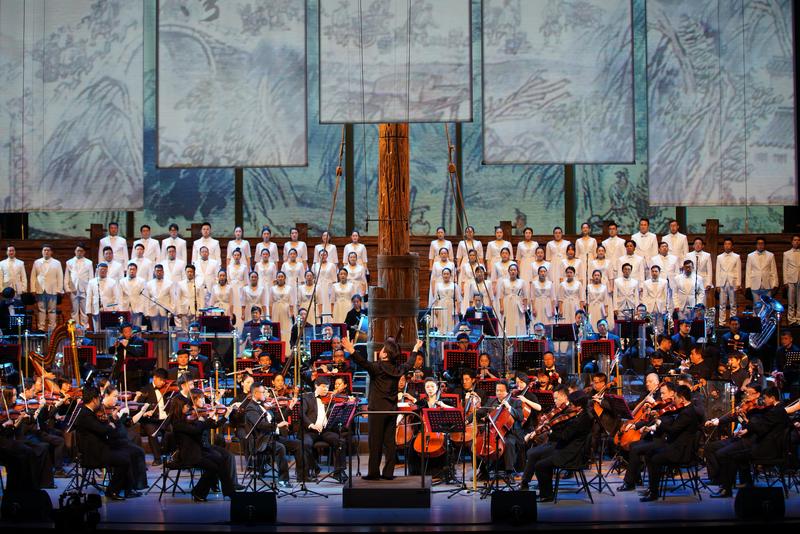 Featuring four chapters, which tell the history of, and portray scenery along, the Grand Canal, the show, composed by Yang Nailin, combines folk music and traditional operatic elements of regions along the canal with Peking Opera.

One of the chapters centers on an event in 1790, which is vital to the birth of Peking Opera. Four Hui Opera troupes visited Beijing as part of celebrations for the 80th birthday of Emperor Qianlong (1711-99). Hui opera, or huiju, is a form of Peking Opera from Anhui province. In about 1840, Peking Opera began to formally take shape, growing rapidly during the reign of Empress Dowager Cixi (1835-1908), a Chinese opera lover. After this, the art form went from strength to strength, with troupes being formed in Beijing, Tianjin and Shanghai.

"The Grand Canal is a precious legacy passed down by the ancestors of Chinese people. Culture flows along the waterway," says the composer, who is a professor at the Central Conservatory of Music.

"Audiences enjoy the unique historical and cultural landscape of the regions along the Grand Canal through Chinese and Western music in the show."

The Peking Opera symphonic suite, Grand Canal of Beijing City, made its debut at the National Center for the Performing Arts in Beijing in December 2020.

On Sept 21, the show was staged at the NCPA again, which opened the ninth China Peking Opera Art Festival.