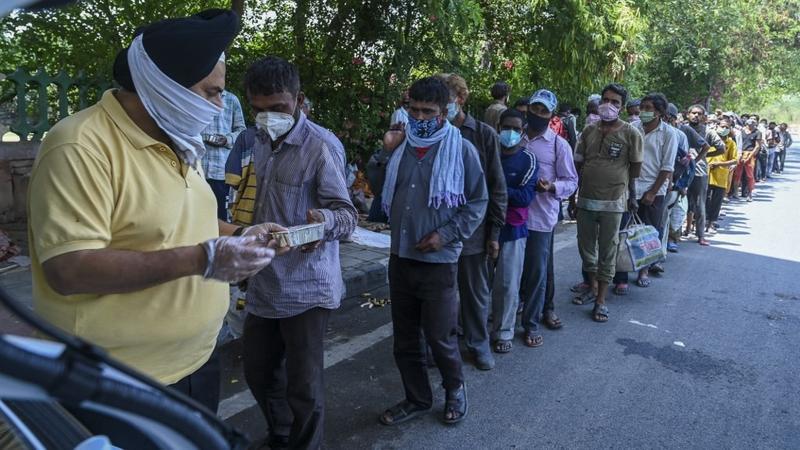 Daily wage laborers and jobless people due to the lockdown imposed to curb the spread of COVID-19 queue-up as volunteers distribute food along a road in New Delhi on May 21, 2021. (PRAKASH SINGH / AFP)

WASHINGTON - The International Monetary Fund on Tuesday revised down its 2021 economic growth forecast for Asia to 6.5 percent, down by 1.1 percentage points from its April projection, according to a newly released regional economic outlook.

"The resurgence of the pandemic, amid initially low vaccination rates, slowed the recovery in the Asia-Pacific region, especially in emerging market and developing economies," Chang Yong Rhee, director of the IMF's Asia and Pacific Department, said at a virtual press conference.

Most of the downgrades in the region come from emerging market and low-income countries, led by India and the Association of Southeast Asian Nations

Noting that Asia-Pacific remains the fastest growing region in the world, Rhee said as vaccination rates accelerate, the region is expected to grow by 4.9 percent in 2022, 0.4 percentage points faster than projected in April.

For advanced economies, the latest IMF forecast is broadly unchanged for 2021 with upgrades in South Korea and New Zealand and downgrades in Japan and Australia, according to the report.

Most of the downgrades in the region come from emerging market and low-income countries, led by India and the Association of Southeast Asian Nations.

"The divergence between Asian advanced economies and developing economies is deepening, with output levels in the emerging market economies and low-income countries expected to remain below pre-pandemic trends in the coming years, reflecting differences in policy support and vaccination rollout," Rhee said.

The IMF official noted the increase in inflation in Asia has been more "subdued" than in other regions so far, reflecting the low pass-through of producer prices to consumer prices, and monetary policies have remained broadly accommodative.

"While we expect these supply chain inflationary pressures to be transitory, they could last longer, and feed more strongly into inflation expectations," he said.