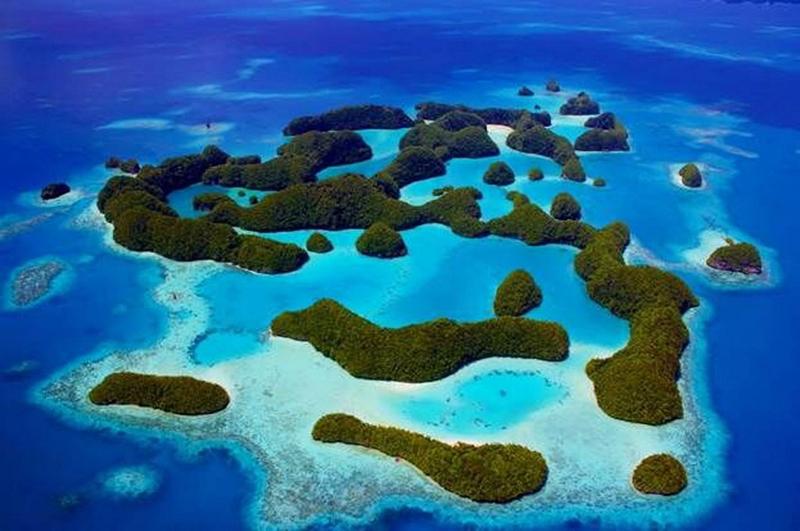 Fully 99 percent of Palau's population over 12 has had both shots of vaccine for the new coronavirus, the International Federation of Red Cross (IFRC) said, citing government figures which also show that this amounts to 16,152 people.

That puts Palau, an archipelago of 500 islands in the western Pacific Ocean, in the "top spot", the IFRC said in a statement, ahead of countries like Portugal which was named one of the world's most vaccinated countries when 80 percent of its 10 million people were fully immunized last month.

It also presents a stark contrast with other small nations in the region that have had sluggish vaccine rollouts due to supply constraints and population hesitancy. Less than 10 percent of the Solomon Islands (population 650,000) and Kiribati (population 119,000) are vaccinated, the IFRC said.

Australia has reported a new record number of COVID-19 cases as the country continues to battle the third wave of infections.

On Thursday morning, there were 2,749 new locally-acquired coronavirus cases reported across Australia, beating the previous record of more than 2,500 set on Saturday. Eighteen new deaths were reported.

It included 2,297 new infections in Victoria, which is the second-most populous state with Melbourne as the capital city, where 11 deaths were reported.

The Australian Capital Territory (ACT) reported 46 new cases and another death on the last day of its lockdown, which will end at midnight on Thursday night after more than 60 days.

Pfizer Inc will make an expedited application to Australia’s medical regulator for its COVID-19 vaccine to be considered for use in children aged five to 11, Health Minister Greg Hunt said.

The company is expected to submit data on its vaccine to the Therapeutic Goods Administration within weeks, Hunt said at a press conference on Thursday.

If the TGA approves the vaccine, the Australian Technical Advisory Group on Immunisation then needs to green light the shot before it can be provided, he said.

The country’s Deputy Chief Medical Officer Sonya Bennett said it was a welcome step which would help protect children and their families, as well as helping keep schools open.

Indonesia’s holiday island of Bali reopened to foreign tourists after 18 months of pandemic hiatus on Thursday, but the island is lacking one crucial ingredient: international flights.

Tourism-reliant Bali is scheduled to reopen on Thursday and though its Ngurah Rai international airport has carried out simulations preparing for tourists to return, it is not expecting much to happen soon.

“So far there is no schedule,” said Taufan Yudhistira, a spokesman for the airport.

Indonesia’s tight immigration measures during the pandemic have devastated the island, with widespread closures of hotels, shops and businesses.

The government is eager to revive Bali’s beleaguered tourism industry in response to a sharp fall in new coronavirus cases since July, when Indonesia was Asia’s COVID-19 epicentre.

But details about the reopening, such as visa requirements and which countries they apply to, have so far been patchy.

Indonesia only confirmed the 19 eligible countries in a statement late on Wednesday, which include China, India, Japan, South Korea and New Zealand, and several countries from Western Europe and the Arabian Gulf.

According to an official briefing published by the Iranian health ministry, the pandemic has claimed 123,275 lives in the country so far, after 194 new deaths were registered in the past 24 hours.

The sixth batch of China-donated Sinopharm COVID-19 vaccines has been handed over to the Lao side upon arrival at the Lao capital Vientiane on Wednesday.

Chinese Ambassador to Laos Jiang Zaidong, after handing over the one million doses of vaccines to Lao Deputy Prime Minister and Chairman of the National Taskforce Committee for COVID-19 Prevention and Control Kikeo Khaykhamphithoune, said the COVID-19 outbreak is spreading around the world, and the epidemic situation in Laos is still developing.

The ambassador said winning the fight against the epidemic is the longing of all and the real need of the Lao people. As a community with a shared future, China is willing to continue to take the anti-epidemic assistance to Laos as a priority.

Lebanon's COVID-19 ministerial committee on Wednesday recommended the administration of a third COVID-19 vaccine dose for citizens aged 75 and above and who received their second doses at least six months ago, the National News Agency (NNA) reported.

The committee also advised a third dose be given to frontline healthcare workers who are in constant and direct contact with patients and who have received the second dose at least six months ago, NNA said.

Malaysia reported another 7,950 new COVID-19 infections as of midnight Wednesday, bringing the national total to 2,361,529, according to the health ministry.

Of the new cases, 29 cases were imported and 7,921 were local transmissions, data released on the ministry's website showed.

One million doses of COVID-19 vaccines donated by China arrived in Yangon Wednesday and another 1 million doses are expected to be delivered Thursday, according to the Chinese Embassy in Myanmar.

Myanmar has been administering COVID-19 vaccine shots to middle and high school students aged over 12 years since Tuesday in an effort to cut the spread of COVID-19 infections.

Meanwhile, the number of COVID-19 cases in Myanmar has increased to 482,803 on Wednesday after 1,573 new cases were reported in the past 24 hours, the ministry said.

Some 34 new deaths were recorded, bringing the death toll to 18,222 in the country as of Wednesday. 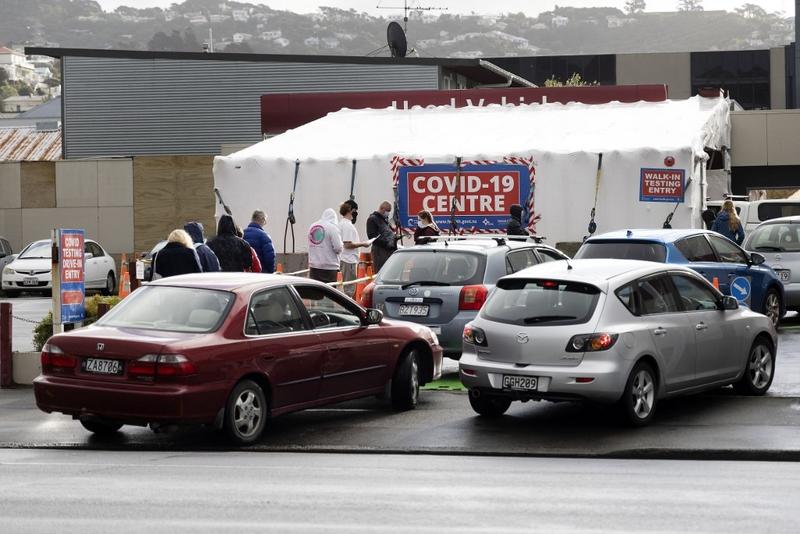 In this Aug 18, 2021 photo, people visit a COVID-19 testing station during a nationwide lockdown in Wellington. (MARTY MELVILLE / AFP)

New Zealand reported on Thursday its biggest rise in COVID-19 infections in six weeks, with all cases detected in Auckland, raising prospects of a further extension of lockdown restrictions in the country’s largest city beyond next week.

Some 1.7 million people in Auckland are under strict stay-home orders until Monday as officials look to stamp out the highly infectious Delta outbreak, the first major spate of community cases in the country since early in the pandemic.

Deputy Prime Minister Grant Robertson said the surge in case numbers in Auckland was not unexpected “but they are rising more quickly,” and blamed illegal home gatherings for the spike.

“Now is not the time for complacency,” Robertson said during a media conference in Wellington, urging residents in Auckland to strictly follow the level-three rules, under which most people are required to stay at home unless they have urgent reasons to go out.

A total of 71 new local cases were reported in the country, all detected in Auckland, up from 55 a day earlier.

About 2.49 million New Zealanders have been fully vaccinated, or about 59 percent of the eligible population, with officials promising to end lockdowns once 90 percent are vaccinated. Officials are looking to administer a record 100,000 doses in a single day during a mass immunisation drive on Saturday.

Even with the Delta outbreak, New Zealand has recorded only 4,472 confirmed COVID-19 cases and 28 deaths during the pandemic, far lower than many comparable countries.

Singapore reported 3,190 new cases of COVID-19 on Wednesday, bringing the total tally in the country to 135,395, the Ministry of Health (MOH) said.

Of the new cases, 2,721 were recorded in the community, 498 were in migrant worker dormitories, and six were imported.

Thailand’s main COVID-19 task force approved a plan to end quarantine for vaccinated travelers from some countries starting next month in a bid to revive its struggling tourism sector ahead of the year-end holiday season.

Air travelers from the US, UK, China, Germany and Singapore will be exempted from quarantine on arrival starting Nov 1, Taweesilp Visanuyothin, a spokesman for the Center for COVID-19 Situation Administration, said at a briefing on Thursday.

The panel’s approval was less than the 10 nations targeted by Prime Minister Prayuth Chan-Ocha earlier this week but it may add more countries to the list after due diligence, Taweesilp said.

The panel also shortened a night curfew by two hours to between 11 pm and 3 am starting Oct 16, while reducing the number of provinces deemed at the highest risk of COVID-19 to 23 from 29. But the panel retained Bangkok, a gateway for tourists, in the highest-risk category because of the high number of new cases.

Turkey on Wednesday confirmed 31,248 new COVID-19 cases, raising its tally of infections to 7,540,223, according to its health ministry.

Turkey started mass COVID-19 vaccination on Jan. 14 after the authorities approved the emergency use of the Chinese Sinovac vaccine.