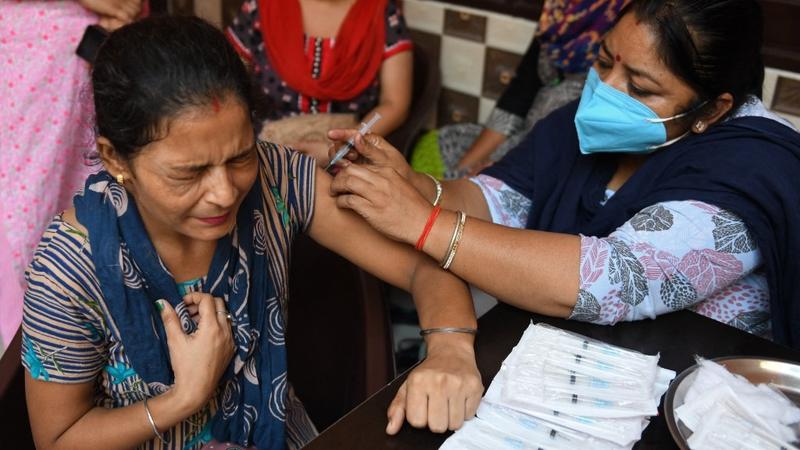 In this file photo taken on Aug 16, 2021, a health worker inoculates a woman with a dose of the Covishield vaccine against COVID-19 at an inoculation site in Amritsar, India.(NARINDER NANU / AFP)

MANILA / SEOUL / NEW DELHI / ISLAMABAD / WELLINGTON/ SEOUL / ANKARA / YANGON - India is building up a stockpile of COVID-19 vaccine doses with 250 million shots prepared and three more vaccines under development, a government official said on Wednesday, which will go some way to help the country meet its export commitments.

Most of these doses will be given to neighboring countries and will also meet India’s commitments to the World Health Organization’s COVAX initiative for poorer nations, said VK Paul, a member of a government think-tank that advises Prime Minister Narendra Modi.

India last month said it would restart vaccine shipments in October, some six months after the government halted exports due to a second wave of infections. Local media reported that exports have already begun to Myanmar, Nepal and Bangladesh, which received one million doses each

Covishield makes up the bulk of 250 million doses, while the rest are Covaxin, Paul said. Several more vaccines are under development and are likely to get statutory clearances by the end of the year, he said.

“India will play a significant role in providing vaccines to the world by 2022,” he told reporters.

The news comes as India is set to achieve its own milestone of one billion first vaccination doses next week, a government official told reporters earlier. About a fifth of the 1.49 billion population are fully inoculated, according to the Bloomberg Vaccine Tracker.

India last month said it would restart vaccine shipments in October, some six months after the government halted exports due to a second wave of infections. Local media reported that exports have already begun to Myanmar, Nepal and Bangladesh, which received one million doses each.

Iran had also obtained one million doses of Covaxin, the Indian Embassy in Tehran tweeted last week, signaling that Modi’s vaccine diplomacy is in full swing.

India agreed in September to restart exports just before Modi embarked a visit to the US, which included a face-to-face meeting with the Quad group that is also made up of Australia, US and Japan. Modi told his counterparts that eight million doses of Johnson & Johnson’s vaccine would available by end-October under the partnership.

The Quad countries will pay for the vaccine and India would bear a certain part of the cost, Modi said during that meeting in Washington.

Paul also said during his briefing with reporters in New Delhi that a third wave of infections is unlikely in India based on three studies.

Government is keeping a close watch on any new wave of cases and has ramped up facilities, including paediatrics, he said.

On the other hand, Paul also said that the science behind booster shots is imperfect and there is no clear picture yet.

India's COVID-19 tally rose to 34,001,743 on Wednesday, as 15,823 new cases were registered during the past 24 hours across the country, showed the federal health ministry's latest data.

Besides, as many as 226 deaths due to the pandemic since Tuesday morning took the total death toll to 451,189. 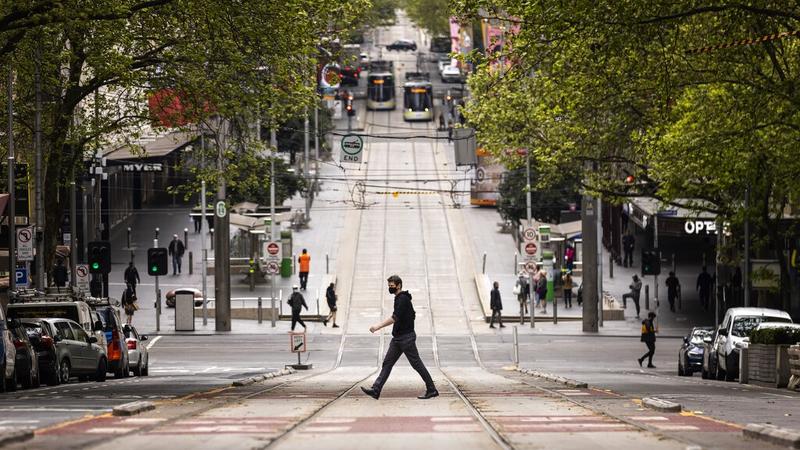 New South Wales could ease more restrictions in Sydney a week earlier than planned on Oct 18 as Australia's most populous state races towards its 80 percent double-dose vaccination target, the government said on Wednesday.

The southeastern state is expected to hit the mark over the weekend, beating forecasts, and officials previously promised to relax further restrictions on vaccinated residents on the first Monday after reaching that milestone.

Retail stores, pubs and gyms can allow more vaccinated patrons when inoculation reaches 80 percent. Mandatory masks will not be required inside offices and nightclubs can reopen for seated drinking, while weddings can have unlimited guests.

Sydney's more than 5 million residents came out of a nearly four-month lockdown on Monday after the 70 percent vaccination target was reached, with state officials promising a phased easing of remaining restrictions after vaccination rates reach 80 percent and 90 percent. read more

Daily infections in New South Wales rose to 444 on Wednesday, up from 360 a day earlier, but well down from the pandemic high of 1,599 in early September.

Australia is in the grip of a third wave of infections fueled by the Delta variant that has hit Sydney and Melbourne, its largest cities, and the capital Canberra.

The government of Brunei Wednesday announced the extension of COVID-19 control measures including a curfew order for 14 days, with stricter levels of punishment for violators.

According to the Prime Minister's Office (PMO), the enhanced control measures will be extended by another 14 days, starting from Oct 18 till Oct 31, 2021.

This extension "is to ensure that the well-being of all parties continues to be safeguarded by way of reducing movement to minimize the spread of the pandemic in this country", the PMO said in a statement.

Before the detection of seven local cases on Aug 7, Brunei had kept a record of 457 days without community infections. Facing a new wave of outbreak, the country had to introduce stricter control measures.

Besides closing religious places, schools switching to online learning, no dine-in for restaurants, and closing indoor and outdoor sports facilities, leisure centers and cinemas, Brunei also banned most of the mass gatherings, requiring all non-essential sector workers to do work-from-home and barring all residents in Brunei from leaving their houses without any important reason.

The Brunei government also introduced more control measures on Oct 1, including a curfew and some strengthened enforcement activities.

The public is required to stay at their respective residences every night from 8 pm until 4 am local time to reduce people's movement and the risk of COVID-19 local transmission.

The pandemic also claimed 213 more lives in the past 24 hours, bringing Iran's total death toll from the virus to 123,081, said Iran's Ministry of Health and Medical Education.

A total of 5,249,956 people have recovered from the disease or been discharged from hospitals across the country, while 5,124 remained in intensive care units, according to the ministry.

The number of COVID-19 cases in Myanmar has increased to 481,230 on Tuesday after 1,382 new cases were reported in the past 24 hours, according to a release from the Ministry of Health.

The release said 26 new deaths were recorded, bringing the death toll to 18,188 in the country as of Tuesday.

According to the ministry's figures, a total of 434,080 patients have been discharged from hospitals and over 4.53 million samples have been tested for COVID-19 so far.

New Zealand reported 55 new Delta variant cases of COVID-19 in the community on Wednesday, bringing the total number of confirmed infections in the country's community outbreak to 1,719.

Fifty-three of the new infections were recorded in the largest city Auckland and two cases were in nearby Waikato, Director-General of Health Ashley Bloomfield told a press conference.

The Philippines' Department of Health reported 7,181 new COVID-19 infections on Wednesday, pushing the number of confirmed cases in the Southeast Asian country to 2,690,455.

Wednesday's caseload is the lowest since Aug 3.

"The relatively low cases today is due to lower laboratory output (on) Monday," the DOH said in a statement.

The Philippines, with a population of 110 million, has tested more than 20.5 million people since the outbreak in January 2020.

South Korea established a panel on Wednesday to debate a strategy on how to "live with COVID-19" in the long-term, as the country seeks to phase out coronavirus restrictions and reopen the economy amid rising vaccination levels.

Under the strategy, the government aims to relax coronavirus restrictions for citizens who can prove they have been fully vaccinated, while encouraging asymptomatic and mild COVID-19 patients aged below 70 to recover at home, the health ministry said last week.

The government will also focus on the number of hospitalizations and deaths rather than new daily infections, and will consider not publishing the latter on a daily basis, Yonhap news agency has reported.

"We will turn COVID-19 into a controlled infectious disease and no longer a fear of the unknown, and return a complete routine to the citizens," Prime Minister Kim Boo-kyum told the panel's first committee meeting on Wednesday, adding that mandatory mask-wearing would not be immediately scrapped under the new policy.

South Korea never imposed a full lockdown but has been under its tightest social distancing curbs since July.

These include limited operating hours for restaurants, cafes, saunas and indoor gyms - which have hit the self-employed and small businesses particularly hard - and a cap on gatherings of more than two people after 6 pm in and around Seoul.

The new strategy comes as vaccination, initially bogged down by a supply shortage, has picked up pace. The country has given at least one COVID-19 vaccine dose to 78.1 percent of its population, while 60.7 percent are fully vaccinated.

In September, the government announced plans to expedite a phased return to normalcy starting November when 70 percent of its 52 million people are expected to have been fully inoculated.

South Korea has kept hospitalization and deaths at a fairly low rate. It had 359 severe cases and a mortality rate 0.78 percent as of Tuesday, official data showed.

Thailand reported 10,064 new infections, an increase from a three-month low on Tuesday, ahead of a government plan to ease restrictions.

Prime Minister Prayuth Chan-Ocha is set to chair a meeting on Thursday to decide on details of reopening plans as well as consider lifting Covid curbs. 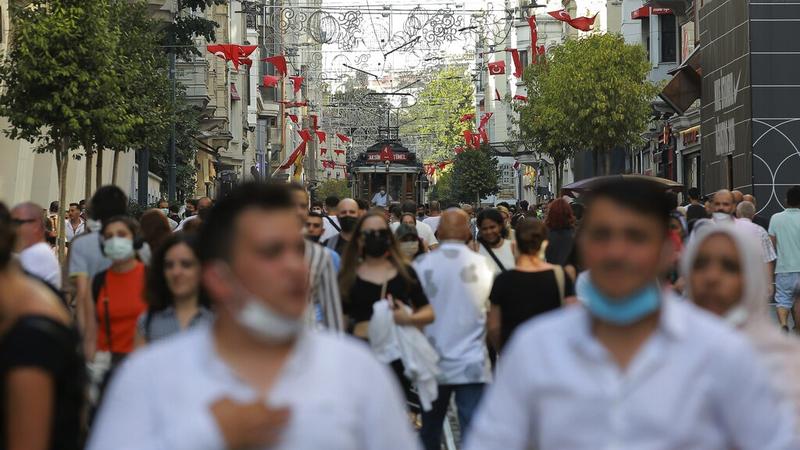 Turkey was already facing a lack of labor before, but the pandemic made it worse as most of the waiters, chefs and busboys have switched to other sectors.

After losing their jobs, thousands of kitchen staff have moved on to make a living amid the pandemic and the motorbike courier business, a booming and lucrative job, was for most the first choice.

In big cities, delivery motorbikes have swarmed. Drivers usually work long hours and rely on tips. This sector is poised to remain a permanent fixture in the dining landscape, according to economists.

In Turkey, the food and beverage sector used to employ up to 2 million workers before the coronavirus outbreak erupted in March 2019. According to official data, the service industry employs 55 percent of all workers.

Vietnam aims to have 95 percent of its 8.1 million children and teens aged 12 to 17 fully vaccinated in the fourth quarter, according to a posting on the health ministry’s website.

The Vietnamese capital Hanoi has also allowed more activities including in-store dining and drinking, and public transportation to reopen on Thursday, the municipal government announced Wednesday.

According to a circular on the issue, to reopen, restaurants, cafes and bars must guarantee their owners and employees are all fully vaccinated against COVID-19, and can only allow half of their capacity and maintain a safe distance between seats.

Museums and parks will reopen to serve individuals and groups of no more than 10 people, as most other businesses will also resume normal operation on Thursday as long as they strictly implement epidemic prevention and control measures, reads the circular.

Hanoi has been easing its restrictions over COVID-19 since Sept 21 after nearly two months under strict social distancing orders, with barbershops and traditional markets first allowed to resume operation.

Over the past 10 days, the average of daily new cases in the city went under 10, despite over 4,000 registered since the ongoing COVID-19 wave in the country started in late April, according to the municipal health department.