By Chen Zimo and Chloe Xu 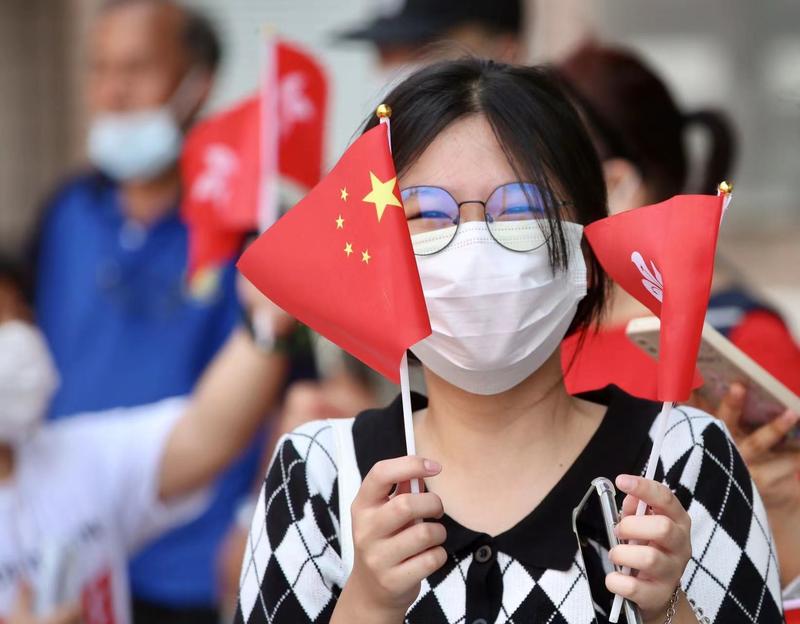 A woman holds up the national flag and Hong Kong Special Administrative Region flag during an event in Tsim Sha Tsui to celebrate the 72nd anniversary of the founding of the People’s Republic of China.  (RAYMOND CHAN / CHINA DAILY)

Hong Kong residents were pleased to find festive scenes across the city on Friday that celebrated the 72nd anniversary of the founding of the People’s Republic of China.

On Friday, the hashtag “national flags on the streets of Hong Kong for National Day” on Sina Weibo was on “Trending” with more than 100 million views, with users praising the displays as “beautiful” and “pleasing”

Members of the public were receiving small national flags distributed by community groups at some popular street corners in Tsim Sha Tsui. They could also join in the street chorus that plays famous patriotic songs like Ode to the Motherland.

One of the spots next to the Hong Kong Cultural Centre at the Victoria Harbour shore was packed with people who were holding the national flag and the flag of the Hong Kong SAR while enjoying the singing, dancing, and the atmosphere.

“Today is National Day! It is a special birthday,” said Wu Lejuan, a kindergarten student, who asked her parents to bring her to the gala performance after learning about the event at school.

The 5-year-old’s mom, who gave her surname as Liu, said such enthusiastic activities would make the children feel a deep connection with the motherland.

The family, which lives in Tai Po in northern Hong Kong, had awoken at 6 am and headed to the Golden Bauhinia Square in Wan Chai to watch the flag-raising ceremony at 8 am.

A retiree surnamed Yung, 72, was passing by the square before being attracted by the cheering crowds and performance. He told China Daily that the show was “energetic and touching”, showing that the city has become more stable and flourishing with the support of the country.

“Though Hong Kong holds similar celebrations on National Day every year in Hong Kong, this is the most special and enjoyable year for me,” said Or, a 70-year-old Hong Kong resident. The past two years of chaos and turmoil made the peace today cherishable, she added.

On Friday, the hashtag “national flags on the streets of Hong Kong for National Day” on Sina Weibo was on “Trending” with more than 100 million views, with users praising the displays as “beautiful” and “pleasing”.

Despite the hot-weather warning issued by the city’s observatory, many spent their holiday hiking and endurance running. Some of them were seen carrying national flags, and receiving thumbs-up and applause from passers-by.

In addition to the specially decorated buses and trams, two sightseeing buses paraded around the city with posters that read “celebrating National Day and our common cultural origin and roots”. The posters were organized by the Hong Kong Cross-Straits Hakka Association.

Taking the Star Ferry between Hong Kong Island and the Kowloon Peninsula, passengers could see screens lighting up in succession on the skyscrapers on both sides of Victoria Harbour, reading “Celebrating the 72nd anniversary of the founding of the People’s Republic of China”.

In the south, on the islands that are several kilometers from Hong Kong Island, holidaymakers were greeted by rows of “Happy National Day” flags at the seashore and on the waterfront. They were set up by the Islands District Council.

Up in the north, villagers in the New Territories made elaborate traditional decorative floral boards and giant plaques to pay their tribute to the motherland. The decorations expressed blessings such as “A forwarding China strives for progress” and “Harmony and stability lead to prosperity”.

Early in the morning, flag-raising ceremonies were held at schools and community groups such as Hong Kong Metropolitan University, the Chinese University of Hong Kong, and the Fukien Secondary School in Siu Sai Wan.