Planting gourds to help a village man get healthy 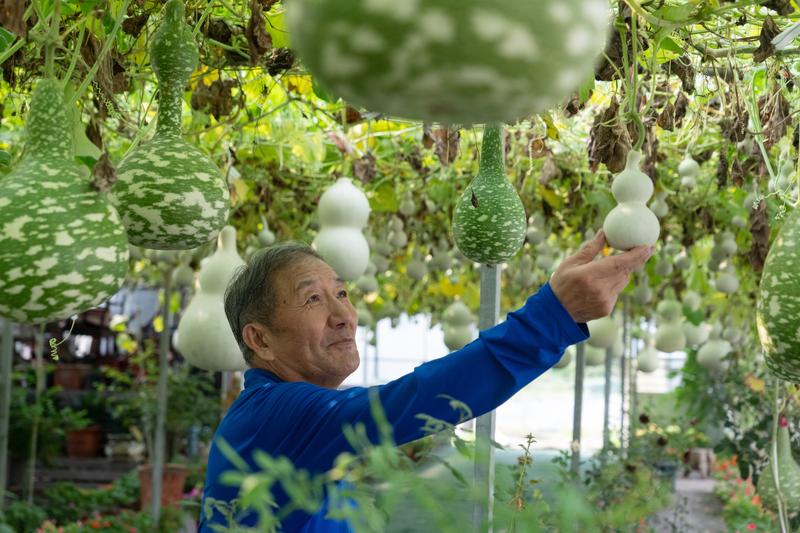 The life of Yao Zhengguo, a resident of Yueshi village in northern Shanghai's Baoshan district, has been significantly improved by his gourd plantation.

Yao, who works in the gardening business, started growing gourds at the age of 37 when he was diagnosed with congenital heart disease. His friends told him that the gourd has an auspicious meaning.

"In Chinese culture, gourds, or 'hulu' in Chinese, sounds similar to the Chinese characters 'fu', which means good fortune, and 'lu', which means wealth. My colleagues suggested that I grow gourds because it had an auspicious meaning for my health," Yao said.

The small plot of land he first started growing gourds in has since expanded into a 2,000-square-meter garden that is popular with families during the summer.

The elderly man, who learned how to plant and process the gourds himself, grows hand-twisted, Asian waist, camouflage, long-handled, crane-headed, and apple gourds.

Yao later set up a stall in the Jiangyin Road Flower and Bird Market, one of the most famous outdoor flower markets in Shanghai in 1980s and 90s, to sell his produce.

In Chinese culture, gourds are often used as home decorations because they symbolize auspiciousness. Back in the 1990s, a well-shaped and colored gourd with a beautiful luster could cost more than 100 yuan, which was a substantial sum of money in those times.

Some of Yao's gourds were so sought after that they even changed hands multiple times within the same day.

But people would still buy low quality and cheap gourds from him to boil as it is believed that the liquid would cure some diseases.

Yao has also learned to turn the gourd into handiworks such as containers, ornaments or cases for singing insects.

Gourds are still popular among the young generation of today as many people grew up watching Hulu Brothers, or calabash brothers, a Chinese animated TV series produced by Shanghai Animation Film Studio in the 1980s.

The series, which tells stories of seven boys with supernatural powers born from gourds, was one of the most renowned animations in China that enjoyed the same popularity as the Monkey King.

Over the past three decades, the gourd has significantly boosted the man's annual income as well as brought prosperity to other villagers, who were taught by Yao.

The village is now recognized as a model for village revitalization and is aiming to become an ecological agricultural complex in the near future.

"We will definitely consider cultivating new varieties of gourds. Our village also plans to set up a gourd studio because innovation is very important," said Yao, adding that the village will grow new kinds of gourds every year to cater to the demand for variety.

Yao said he hopes to leave a legacy behind with his gourds.

"Hundreds of years later, when people see the gourds, they may think of Baoshan and me," he said.

Yang Hong contributed to the story.