Nature and tranquillity in a garden in the district of Jiading 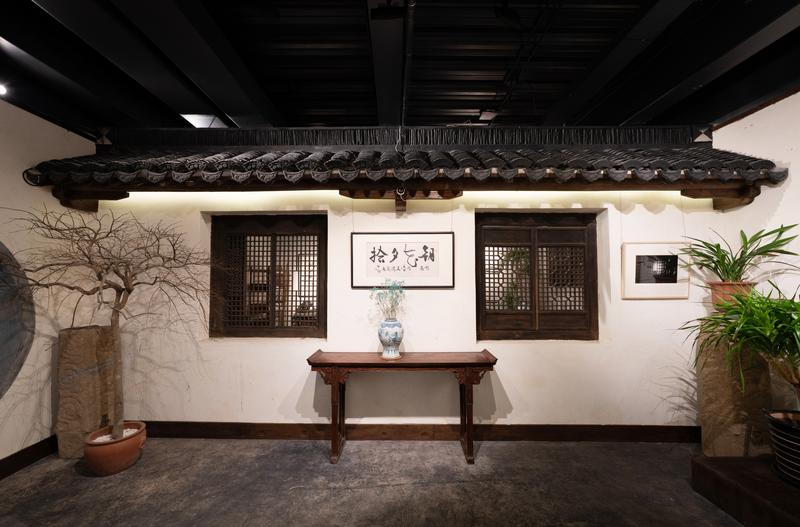 Traditional white walls with upturned eaves are seen in a room in the Ming Che Shan Fang garden in Shanghai. The room was renovated from a factory and divided into several sections by adopting such designs. (GAO ERQIANG / CHINA DAILY)

"I designed the garden based on my understanding of Chinese art and aesthetic, including the placement of rocks or the location of gates or plants, without any design sketches"－Yin Hao, a Shanghai resident

In a complex combining shopping, dining and entertainment and located in the Jiading district west of Shanghai, a garden named Ming Che Shan Fang positions itself as a unique place to experience nature and tranquillity in the bustling center of a sprawling city.

Hidden at the end of a stone footpath winding its way through the trees, the garden covering around 1,000 square meters was designed and owned by Yin Hao, a Shanghai resident. It was used for bonding with friends through Chinese traditional paintings, calligraphy and antiques they are all interested in.

It's not as large as the famous Suzhou gardens, but it has the major elements to replicate nature in miniature in a classic Chinese garden. There are ponds, plants, rocks, and a building with upturned eaves.

The scenes unfold gradually in the garden, while one walks along the winding roads. Rocks block the view at the entrance so visitors don't see the whole scene at one glance which is a unique feature of a classic Chinese garden.

The Chinese garden can never be wholly observed from a certain point. A good design usually allows people to discover details step-by-step by walking inside.

"I designed the garden based on my understanding of Chinese art and aesthetic, including the placement of rocks or the location of gates or plants, without any design sketches,"Yin said. 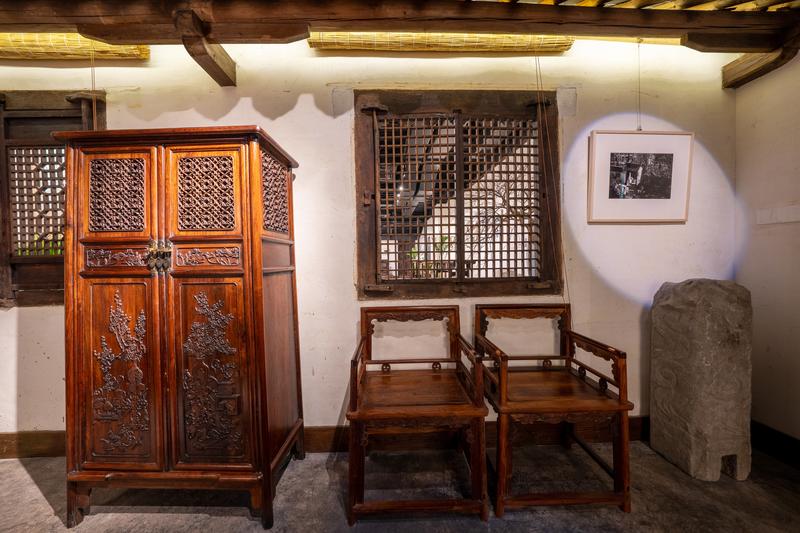 Traditional Chinese style furnitures made from scented rosewood are seen at a room in the garden. (GAO ERQIANG / CHINA DAILY)

Born in Nanxiang in the ancient town of Jiading, Yin grew up in a neighborhood next to Guyi Garden, which has a history dating back to the Ming Dynasty (1368-1644).

"The Guyi Garden in Jiading was a haven for fun in my childhood, alluring visitors by its exquisite bridges, pavilions, lawn and rockery to run around and play soccer or hide and seek with family and friends," the 45-year-old said.

Yin's father used to plant flowers in the backyard of his home.

"This is the most impressive memory regarding my father who passed away in 1986 when I was 10, influenced by whom I hope to build my own garden," he added.

Backed up by his experience of improving the greening environment for some factories, Yin built his first garden covering around 200 square meters in 2008. Using the money he and his family saved for years, he renovated a house in Gelong village in the northwest corner of Jiading.

The place was also used for gatherings with friends as well as displaying and storing some antiques he had collected since 2005. However, the garden was torn down due to urban renovation in 2015. It was not until 2018 when Yin found an abandoned factory with footpaths and a river near the structure, an excellent place to build a garden in an urban area.

The name of the garden was "Ming Che", which means "bright and pure", representing the freedom and tranquillity he pursued as well as symbolizing the original intention of his dream.

"Although the garden was created following my mind and interests without any sketches, it was very carefully and thoughtfully designed to be built," he said. 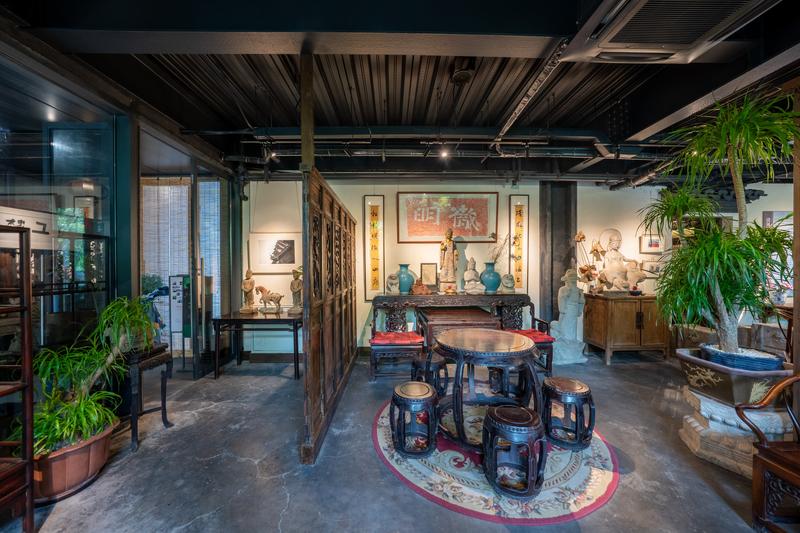 The traditional Chinese furniture from the Ming and Qing dynasties he collected, along with books, brushes and inkstones for calligraphy, are displayed in the structure of the garden, forming a balance between modernity and tradition.

A core theory in garden design is borrowing scenery, incorporating background whether far or near into a composition through something, usually windows, in the middle, Yin said.

"For example, we keep the French windows of the factory, so that visitors can see through the window from inside to borrow scenery from outside, which makes the structure look more spacious," he added.

Yin said he sought advice from Cai Qiuzhi, an expert in the landscaping renovation of Jiading for more than 60 years, and gained knowledge from books.

"Yin's garden is the epitome of Chinese classic gardens. It's tiny, compared with other Chinese gardens, but people don't have such a feeling when they visit it," Cai commented. "It looks natural, simple, yet elegant. There is no expensive bonsai, nor artificial interference. All decorations and scenery are original, but carefully planned."

"Small classic gardens are a sanctuary for its owner, nothing like other types of Chinese gardens which are spacious or consist of cultural relics, nor parks in other countries with large lawns for sports."

Cai said Chinese classic gardens reflect different cultures as well. For example, Suzhou gardens were usually built by literati who abandoned their career of being officials in government and lived in seclusion in rural areas. Gardens were a sanctuary for them, simple yet warm. However, gardens in Jiangsu province's Yangzhou, which is home to rich salt merchants, features extravagant construction and reflected the merchants' attitudes toward luxury and enjoyment.

"People's appreciation of beauty is evolving as the world is developing. Creating a garden that looks the same as a traditional one is not necessary, and instead, we can adapt to local conditions and combine the living habits and aesthetic of people today, while incorporating major elements of classic gardens," Yin explained.

"It's a place to have a glimpse of Ming and Qing furniture and local gardens," says Ma Shanglong, a writer who visited the garden. "I also admire the owner's design to build a Jiangnan style garden within the steel structure of a factory. It is a place worthy of several visits."

Valuable antiques enrich the culture of the garden. It includes a 3-meter long table made of Huanghuali wood－the main material of hardwood furniture from the Ming and Qing dynasties－from the late Qing Dynasty (1644-1911) Yin collected from Zhejiang province's Huizhou. The table was used by people from ancient China to write calligraphy on.

The wooden windows of the ancient bungalows collected from Shandong province are used to borrow scenery from one room to another.

The garden has also been where exhibitions are held for free by Yin's friends, as an art appreciation and cultural exchange platform. So far, it has showcased exhibits such as Chinese brushes and ink, fans, paintings and calligraphy. "Some visitors hope to buy the antiques, but I have no plan to sell them and don't know the current prices. Some may be worth tens of millions yuan if they are auctioned," Yin said.

"They are all valuable cultural antiques in need of intensive care which will last forever if protected well, and I'd love to protect them."