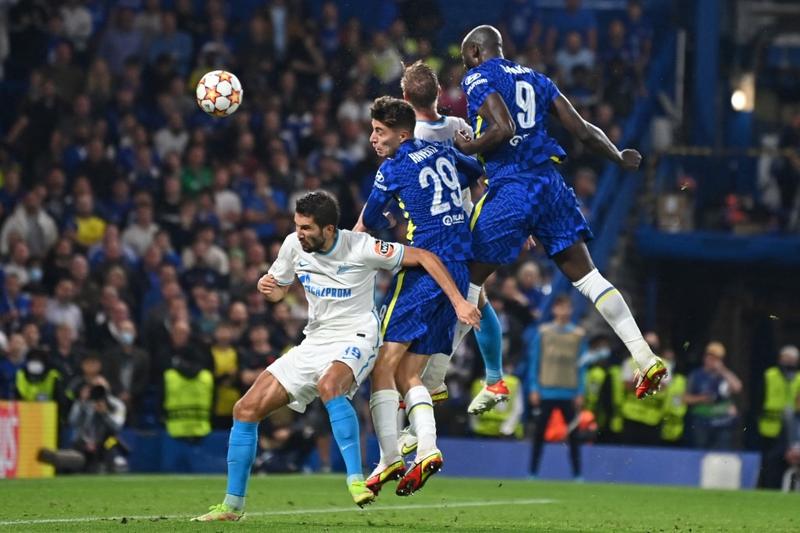 LONDON - Romelu Lukaku opened his Champions League account for Chelsea as his powerful header earned the holders an unconvincing 1-0 victory over Zenit St Petersburg at Stamford Bridge in their Group H opener on Tuesday.

Chelsea were hardly convincing, however, and Thomas Tuchel's side did not even manage a shot on target in a pedestrian first half

It had been an uncomfortable night for the defending champions against a well-organised Russian side but in the 69th minute the big-money striker Lukaku broke the deadlock with a header straight from the centre forward's handbook.

Chelsea were hardly convincing, however, and Thomas Tuchel's side did not even manage a shot on target in a pedestrian first half. They did improve in a far more entertaining second period in which Zenit looked capable of springing a surprise.

ALSO READ: Chelsea's Lukaku back with a bang, ManU held by Southampton

But all that mattered in the end for a raucous Stamford Bridge crowd was that another European campaign began with three points, maintaining the club's impressive start to the season.

When Chelsea won the trophy for the first time in 2012 they suffered an ignominious fall from grace a few months later as they became the first holders to bow out in the group stage.

Handed a comfortable looking group this time it would be astonishing if they suffered the same fate, especially in view of the powerhouse squad they have assembled and the way they have started the new season.

After the empty stadiums of last season, because of the COVID-19 restrictions, there was a celebratory feeling in the damp air before kickoff as Jorginho, N'Golo Kante, Edouard Mendy - key men in Chelsea's triumph last season - and manager Tuchel received awards from UEFA president Aleksander Ceferin.

Despite all the pomp, the champions struggled to impose their superiority over Zenit in the opening 45 minutes as the game struggled to live up to the pre-match firework display.

A cagey first half ended with Zenit's keeper Stanislav Kritsyuk not even required to make a save as Chelsea struggled to get the ball to an isolated Lukaku.

The Belgian's only sight of goal was a header that cleared the bar while the first shot on target came from the visitors as Yaroslav Rakits'kyy's tame effort was easily gathered by Mendy in the 38th minute.

Tuchel resisted the urge to shuffle his pack at halftime and Chelsea finally began to pick up the tempo with Hakim Ziyech forcing Kritsyuk into a low save before centre back Antonio Rudiger barrelled through the middle before lashing a shot wide.

It was not one-way traffic though and Rudiger showed his pace at the other end to get a vital toe in to deny Zenit's burly striker Sardar Azmoun.

Kai Havertz, Chelsea's hero from last season's final in Porto, came off the bench in the 63rd minute, replacing Ziyech.

It was Lukaku's presence that proved decisive in the end though as he showed the penalty area instincts that persuaded Chelsea to break their club record transfer fee to bring him back.

For the first time all night he received the kind of ball he thrives on and as Cesar Azpilicueta's cross picked him out there was only one place the ball was going as Lukaku made it 14 goals in his last 14 UEFA competition appearances.

There was a late scare for Chelsea with Zenit's substitute Artem Dzyuba somehow failing to make contact as the ball was played across the area, but all in all it was an efficient enough start for Tuchel's side.