Child abuse figures are tip of the iceberg

A university researcher estimates that Hong Kong registers 1 percent of its child abuse cases. Globally, about 0.4 percent of child sexual abuse cases are reported. Reluctance to intervene, lack of faith in outcomes, and absence of effective resolution mechanisms are cited as reasons. Wang Yuke reports from Hong Kong. 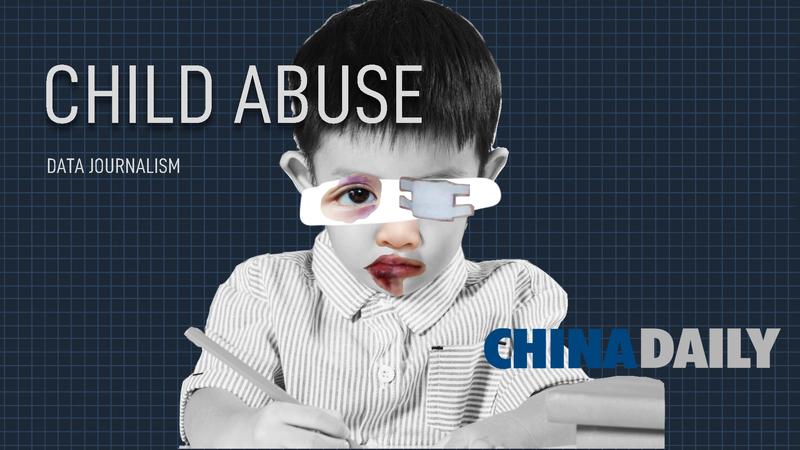 Domestic child abuse is a family problem. Society becomes aware of an abused child when someone outside the family reports it to the police, or to a social worker. Teachers are usually the first to notice when a child is abused. The parents may be called in for a discussion. Does that solve the problem? Teachers are not trained child abuse counselors, nor is it their position to intervene in family distress.

Neighbors are disinclined to report. What happens within the closed walls of homes is regarded as nobody else’s business. The child is forsaken by social convention to routine abuse. Children learn to accept it. Parents are authority figures. Child abuse, like spouse abuse, is far more prevalent than the official statistics indicate. Only extreme cases involving serious injury or death come to the notice of the authorities. The vast majority of child abuse occurs below the social radar. This is not unique to Hong Kong.

Children with special needs, such as attention deficit hyperactivity disorder, are more likely to encounter physical abuse, said Abbie Cheung, a social worker with the Boys’ and Girls’ Clubs Association of Hong Kong. Their tendency to disobey, misbehave, and not sit still can easily irritate their parents.

Stressed parents may resort to violence. Parents with such problematic children are also burdened by feelings of guilt, inadequacy, and hopelessness. They may resort to drugs, alcohol, or computer games to escape the reality, which increases the likelihood of more violence, Cheung said.

The enforced stay-home conditions of the COVID-19 pandemic prevented maltreated children from being noticed by teachers. It also increased the strain on parents prone to inflict violence on children. Only severe injuries or life-threatening wounds brought the victims to hospitals. The pandemic artificially depressed the already low official child abuse statistics.

In Hong Kong, there were 940 registered child maltreatment cases in 2020, down from 1,000 in 2019. But police revealed that child abuse cases in the first quarter of 2021 soared by 68 percent compared with the same period in 2020, according to Chui Wing-hong, a professor of social and behavioral sciences at the City University of Hong Kong.

Child maltreatment was hidden from view even more during the coronavirus outbreak, said Clifton Emery, associate professor of social work and social administration at the University of Hong Kong, “This can be deduced from the more-frequent hospital visits, as the problem worsened with injuries inflicted on children.” Official figures, registered under such circumstances, do not reflect the scale of the problem. “No government monitors child maltreatment via surveys on a regular basis, so official figures are conservative,” Emery said.

From his extensive research into child abuse, Emery estimates that only 1 percent of child maltreatment cases get registered in Hong Kong. As a social alert signal, that is wholly inadequate. Social workers confirm that child abuse is largely a phenomenon of families at the margins of society, handicapped by poor education and low income.

Often, both parents have to work to earn enough for food and other basic necessities. Negligence of children is a fact of life. Given that 20 percent of local residents are below the government’s poverty line, the scale of child abuse remains hidden like the proverbial iceberg. Official statistics can reveal only the tip of it.

Save the Children Hong Kong, a non-governmental organization, and Emery are surveying the range of sexual predation online. The official statistics indicate online sexual abuse at 1 to 2 percent, which may not factor in all online sexual victimization. “Most sexual abuse begins with online grooming. There seems to be an inappropriate idea that a 14-year-old child with a 40-year-old boyfriend is not a case of sexual abuse. A minor under the age of 18 cannot reasonably consent to a sexual relationship with someone many years her senior,” Emery said. 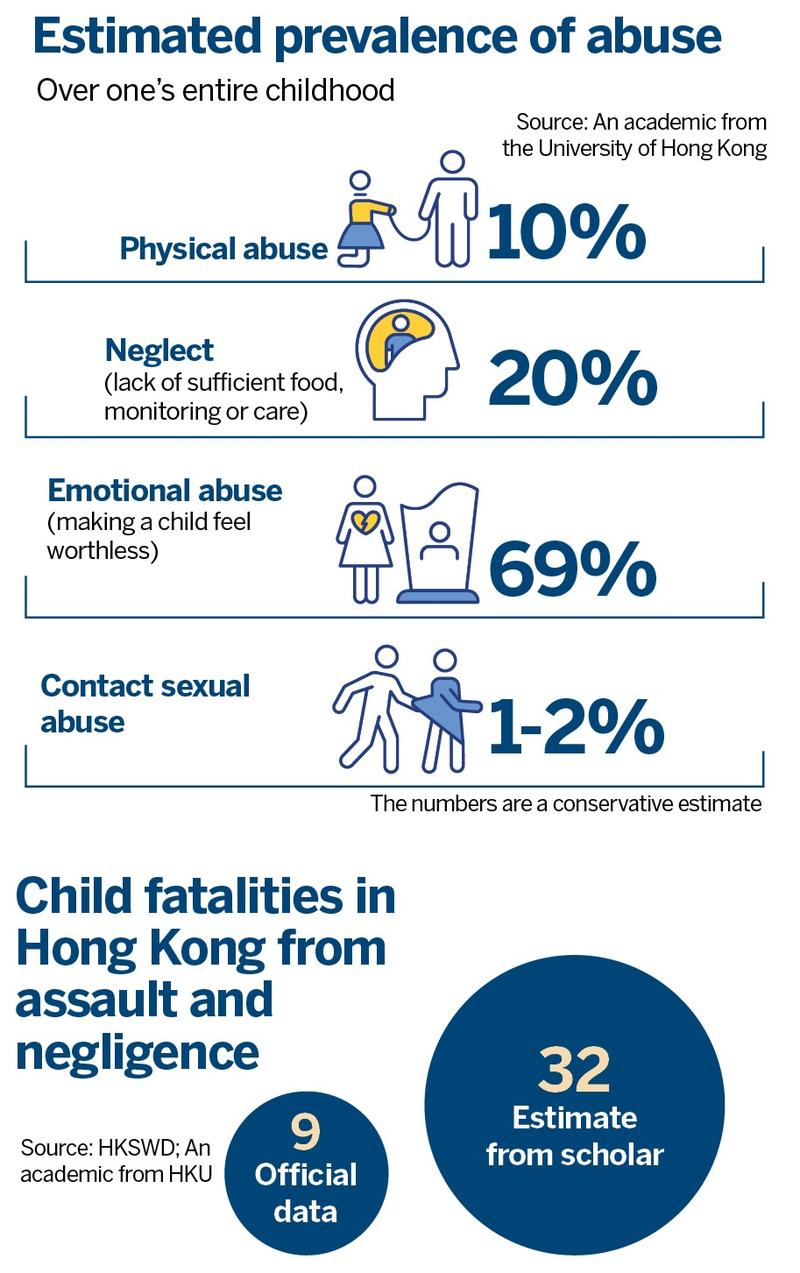 The Social Welfare Department of Hong Kong has stringent guidelines to handle child maltreatment cases, engaging professionals across disciplines for child abuse intervention. The child abuse response infrastructure is ready in theory. The challenge of rectification remains if the child is not removed from the abusive physical and psychological environment. But there is no such alternative care for abused children.

Additionally, relatives, neighbors, and teachers do not report known cases for fear of retribution. Emery said that a strong cultural convention inhibits those who know. The family unit is considered “out of bounds” for outsiders to interfere. Thus, cases are rarely reported. Report and rectification lag behind the actual frequency and incidence of domestic child abuse worldwide. 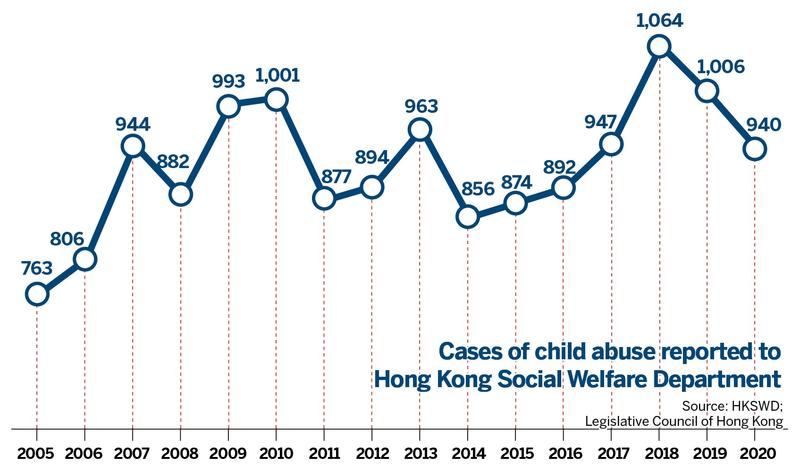 Michael Dunne, professor of child maltreatment at Queensland University of Technology, reputed for his child abuse studies, said he believes that only 20 percent of child abuse cases are officially registered globally, and even then, only for the most severe cases. “The lack of official data is most serious in low resource settings around the world where child abuse official reporting, data collation, and analysis are not consistent. There are institutional barriers to transparent release of the data that is collected,” Dunne said.

Lenneke Alink, professor of forensic family studies at Leiden University, the Netherlands, found that personnel in education, healthcare, youth care, and justice departments often do not report cases when they feel it would not improve the situation, or when they feel that cases were not “bad enough” to report. Alink established a significant pattern of maltreated children who would become maltreating parents. “A substantial proportion of maltreated parents go on to maltreat their children, but also note that there is a large group of maltreated parents who do not continue this maltreatment in the next generation.” This is termed “intergenerational transmission” of child abuse behavior. 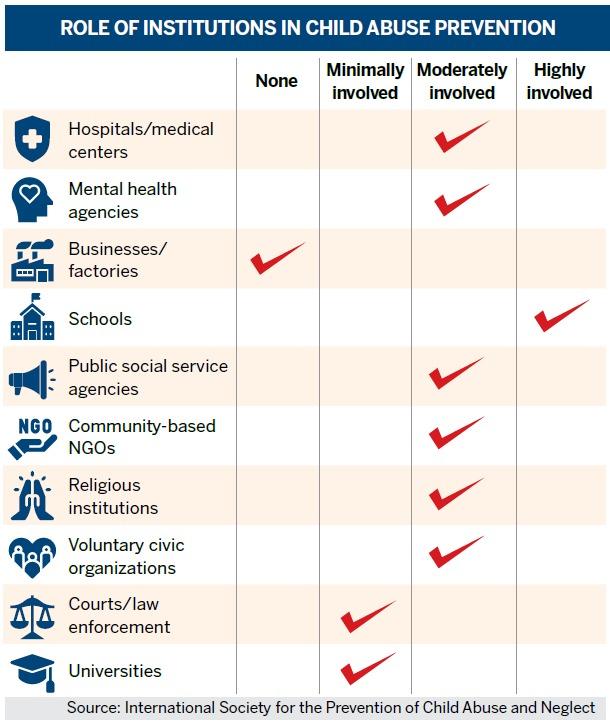 Abused children carry their scars into adulthood, Dunne said. In a recent study on the lasting effects of child maltreatment, he surveyed 2,300 people aged 60 to 100 years in Malaysia and Bhutan. Compared with those who suffered little or no abuse, subjects with high levels of child maltreatment had significantly more problems like depression, poor general health, and revictimization. That confirms similar findings by researchers in other countries.

The post-traumatic syndromes may haunt the victims through nightmares, uncontrollable flashbacks and mental replays of the horrendous incidents. Emery said they feel humiliated, powerless and worthless, and they trust no one, leading them to substance abuse, self-harm, and suicidal behavior to cope with the psychological distress. Those unaware of their trauma cannot understand them. 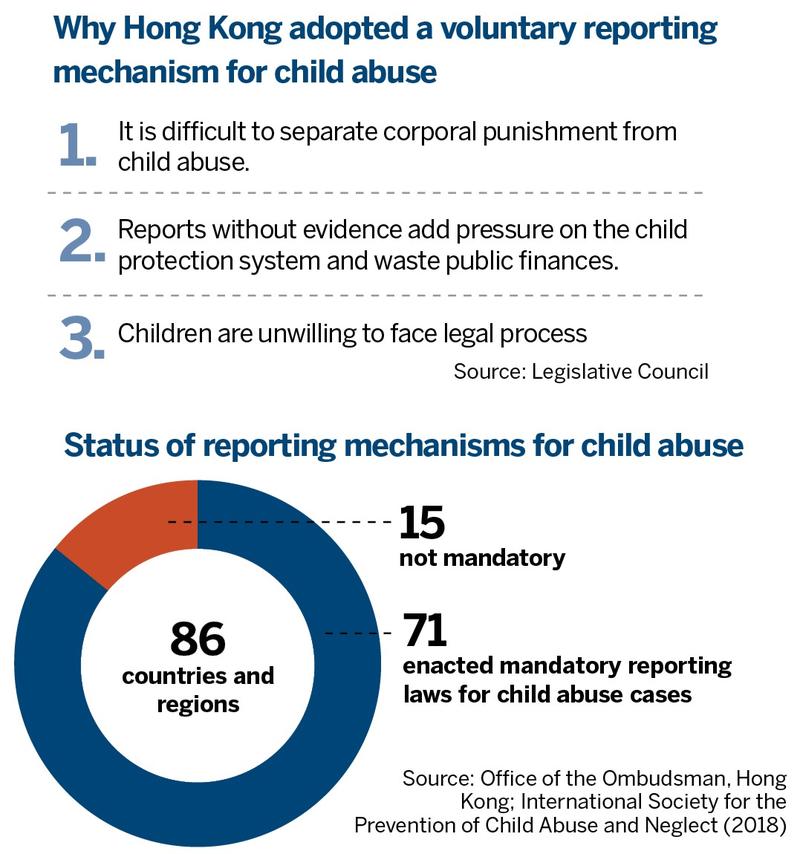 In 1989, Cathy Spatz Widom, at the time a professor of criminal justice and psychology at Indiana University Bloomington, investigated the link between child abuse victims and subsequent neglect, criminality, violence and child abuse in adulthood. She found that abused and neglected children had higher rates of adult criminality, and more arrests for violent offenses than the control group.

For many victims, child abuse was not a discrete event (a sexual abuse encounter, or a severe beating) that could be compartmentalized, Dunne said. The abuse they suffered was chronic and persistent, such as emotional abuse, threats of physical harm, exclusion from family, sexual abuse by multiple people, or initiation into sexualized behavior by a pedophile. “Their mental health, self-image, and sense of control over their life is damaged. It impairs their cognitive and emotional development, leading to distress in adult years,” Dunne said. 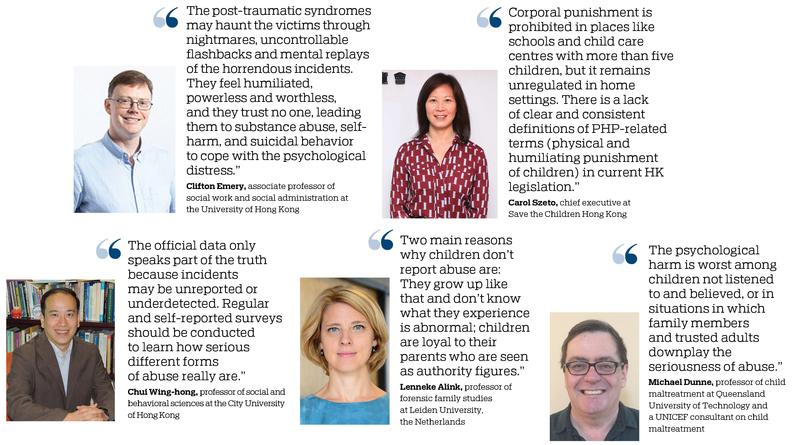 Save the Children Hong Kong, established in 2009, tackles the underlying parent-child relationship and mental health of both parents and the youth. Its signature Heart to Heart Parent-Child Program, introduced in 2018, has enhanced relationships by imparting positive parenting knowledge to parents and caregivers.

It empowers children to express their views and emotions. Carol Szeto, the organization's chief executive, said they are expanding the reach to more children and families particularly from deprived and marginalized communities.

Last year, Save the Children Hong Kong announced an investment of HK$8 million (US$1.03 million) in mental health programs. “In collaboration with other NGOs, we rolled out programs for a variety of interventions, including intensive counseling, talks, workshops, parents’ support groups, and art and play therapy to help children and youth maintain positive mental health, and build resilience,” Szeto said.

Loved ones of the victims play a vital role for their recovery, Dunne said. It is vital that families and professionals (teachers, nurses and doctors) “believe children when they disclose.” The psychological harm is worst among children not listened to and believed, or in situations in which family members and trusted adults downplay the seriousness of abuse.

When asked to share ways to get over the trauma, child abuse survivors answer “learn to accept and confront it.” One aspect of resilience is psychological fortitude, which is stronger in some people than others. “Not everyone has the cognitive skills or mental strength to overcome,” Dunne said.