All 16-, 17-year-olds in England to be offered first vaccine dose 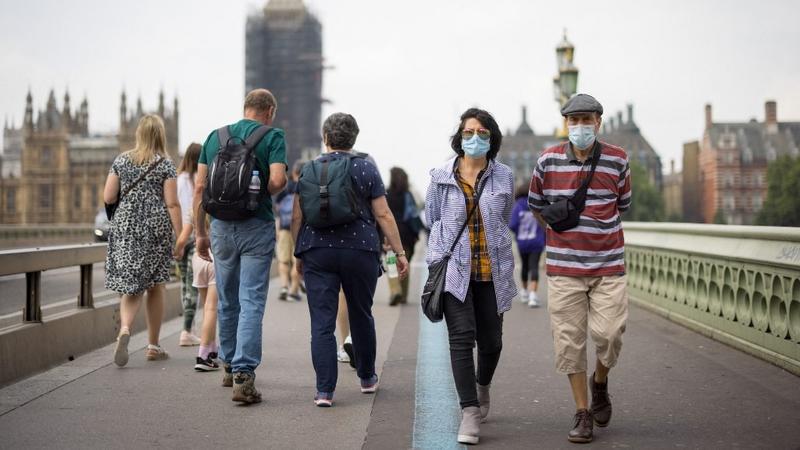 NEW YORK / PARIS / NAIROBI - All 16- and 17-year-olds in England will be offered their first COVID-19 vaccine dose by Aug 23, according to a target set by British Health Secretary Sajid Javid.

Javid said on Sunday that offering young people the vaccine by that date will allow the teenagers in that age bracket the two weeks necessary to build maximum immunity before returning to school in September.

"I have asked the NHS in England to ensure they offer a first dose of the vaccine to everyone aged 16 and 17 by next Monday, Aug 23, this will make sure everybody has the opportunity to get vital protection before returning to college or sixth form", Javid said in a statement on Sunday.

Britain has suffered more than 130,000 deaths within 28 days of a positive COVID-19 test, the second-highest total in Europe after Russia and one of the highest in the world

Britain has suffered more than 130,000 deaths within 28 days of a positive COVID-19 test, the second-highest total in Europe after Russia and one of the highest in the world.

However, Prime Minister Boris Johnson's government recently went ahead with easing COVID-19 restrictions in England due to the broad roll-out of vaccinations which Johnson said had largely broken the link between infections and subsequent hospitalization and death.

More than three quarters of British adults have received two doses of a COVID-19 vaccine, and 89 percent have received at least one.

"NHS England has launched a new online walk-in site finder to help 16- and 17-year-olds locate the nearest available centre. Further sites will come online over the coming days and weeks", the Department of Health said on Sunday.

The government coronavirus task force said 816 people had died of coronavirus-related causes in the past 24 hours, pushing the national death toll to 170,499.

On Saturday, Russia's daily COVID-19 deaths hit a new record of 819, a day after Moscow's health department reported the highest number of monthly deaths in the city since the start of the pandemic. read more

Russia's daily coronavirus deaths were on the rise after infections peaked in July. Authorities blame the infectious Delta variant and a slow vaccination rate.

Uganda plans to import reagents of COVID-19 vaccines to start its own production to step up inoculation constrained by limited supply.

Imports of chemicals would fast-track vaccine production in the East African country, President Yoweri Museveni said in a televised speech late Saturday. Uganda has administered only 1.17 million jabs out of the 21 million targeted before the country can fully remove restrictions imposed to contain the virus, according the Ministry of Health.

“My appeal to partners abroad is to sell us reagents, some of the chemicals to use,” the Ugandan leader said. “Because of speed for the first production we would want to buy from people who have established lines abroad.”

Lawmaker Emmanuel Otiam Otaala -- a medical doctor, former minister of state for health, and a member of parliament’s COVID-19 committee -- said the proposal was feasible.

Africa’s biggest coffee exporter, which has a population of about 42.7 million people has so far received donations of about 1.73 million doses, mainly through the World Health Organization’s Covax facility.

Uganda’s total number of coronavirus infections has doubled since end-May to about 96,700, driven by the spread of the Delta variant, according to the Ministry of Health.

A street performer sleeps at Time Square on August 5, 2020 in New York City, during the coronavirus pandemic. (ANGELA WEISS / AFP)

The seven-day average of COVID-19 deaths reached 645 in the United States on Friday, almost doubling in two weeks to reach the highest point since May, according to data compiled by the Johns Hopkins University.

Meanwhile, the daily infections are up about 66 percent over the same period, back at levels last seen in early February, with the average topping 128,000 as of Friday, showed the university's data.

As the whole nation is grappling with the Delta variant which caused a new round of fatalities since the pandemic occurred 18 months ago, educators and the federal government's fight to keep the school mask mandate in place is still going on.

Hospitalizations of COVID-19 patients in their 30s have hit a new record, US government data show, a sign of the toll that the highly contagious Delta variant is taking among the unvaccinated, The Wall Street Journal reported

Hospitalizations of COVID-19 patients in their 30s have hit a new record, US government data show, a sign of the toll that the highly contagious Delta variant is taking among the unvaccinated, The Wall Street Journal reported on Saturday.

ALSO READ: Report: US battle against COVID-19 is a failure

Thirty-somethings, who are in prime ages for work and parenting, had largely avoided hospital stays for COVID-19 during earlier phases of the pandemic because of their relative good health. Yet the age group is seeing new coronavirus hospital admissions increase during the recent Delta-driven surge, which doctors and epidemiologists attribute to the failure of large numbers of Americans to get vaccinated and their highly active lives, according to the newspaper.

The rate at which adults ages 30 to 39 are entering hospitals with COVID-19 reached about 2.5 per 100,000 people as of last Wednesday, according to the latest data from the U.S. Centers for Disease Control and Prevention (CDC) and the Department of Health and Human Services, up from the previous peak of roughly 2 per 100,000 people in early January.

The same tragedy has happened to American children -- early versions of COVID-19 largely spared children but the Delta variant proved to be much less discriminating, and has led to more child hospitalizations, reported the National Public Radio (NPR) on Saturday.

"Now, health care workers on the front lines say there is another frightening prospect looming: a surge in children diagnosed with a combination of COVID-19 and respiratory syncytial virus (RSV)," said the report. The CDC said that it can be life-threatening in infants and young adults.

Protesters have marched in cities across France for a fifth consecutive weekend against rules compelling them to show a COVID-19 health pass for daily activities, but in lesser numbers than a week ago.

Since last Monday, citizens have been required to show the pass in public places, proving that they have been vaccinated or have recently been tested negative for the coronavirus.

After a week of leniency from the police, the government has vowed to get tougher on health pass checks, and testing, unless prescribed by a doctor, will no longer be free from October.

The protests have united a disparate group against President Emmanuel Macron's legislation, which is meant to help contain a fourth wave of COVID-19 infections spreading across France and help safeguard the country's economic recovery.

The total number of participants in the latest protests had diminished to almost 215,000, according to the interior ministry, after a steady rise from 114,000 on the first Saturday of protest on July 17 to 237,000 on Aug 7.

The number of people being treated for COVID-19 in intensive care units has more than doubled in less than a month, standing at 1,831 as of Friday. That's less than a third of the third lockdown peak of 6,001, but high enough to trigger restrictive measures in certain areas. read more

Health Ministry data showed nine in every 10 COVID patients recently admitted to intensive care had not been vaccinated. A majority of French support the health pass, surveys show.

The number of people who have been vaccinated in Kenya against COVID-19 crossed the 2 million mark Saturday, a major milestone for the east African nation as it races to give jabs to as many people as possible.

Mutahi Kagwe, cabinet secretary in the Ministry of Health, announced that as of Saturday, 2.01 million people had been vaccinated, up from 1.97 million Friday.

"Of these, total first doses are 1.26 million while second 744,186," Kagwe said in a statement released in Nairobi, capital of Kenya.

Kenya's COVID-19 vaccination drive has picked up since last week after the government allowed any citizens to get the jabs at designated places.

State agencies and private firms are also fighting vaccine hesitancy by organizing the exercise for their workforce.

Kenya targets to vaccinate 26 million people by the end of 2022, according to the Ministry of Health.

After a lull of a month or so since its last wave, positive cases climbed swiftly in August with the ministry recording upward of 1,000 cases every single day. There have been 219,938 infections and 4,319 coronavirus-related deaths reported in the country since the pandemic began.