Gardens where the Party bloomed

By Deng Rui and Tan Yingzi in Chongqing 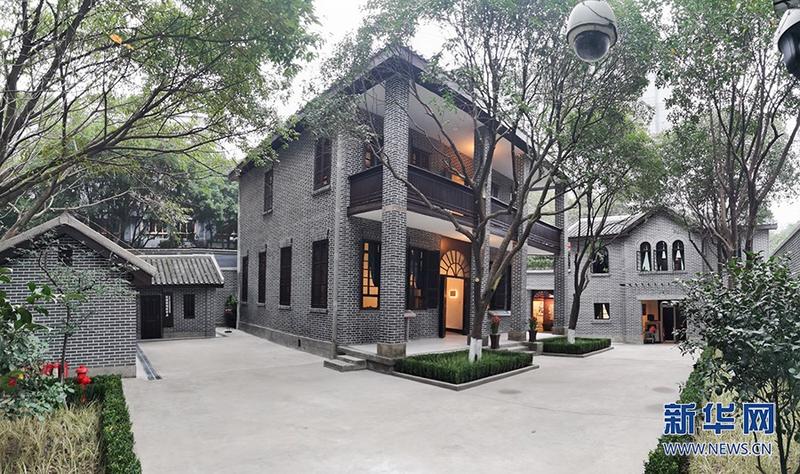 The Guiyuan Garden is among the abundant wartime historical and cultural sites in Chongqing. (PHOTO / XINHUA)

On July 1, the Communist Party of China, the world's largest political party with more than 90 million members, celebrated its centenary. As the summer tourist season begins and interprovincial group tours resume around the country, red tourism continues to boom in Chongqing, a city which boasts abundant wartime historical and cultural sites and relics.

Chongqing has a glorious revolutionary history. The city made major contributions to consolidating and strengthening the united front, an early form of multiparty cooperation, and winning the victory of the new-democratic revolution.

Taking a walk along Zhongshansi Road in the city's downtown Yuzhong district, visitors can learn the history of the Chongqing Negotiations and the development of the CPC's work as part of the united front.

The 800-meter-long road with its flourishing Ficus lacor trees on both sides is dubbed "the most beautiful road in Chongqing". It is also home to several famous historical sites, such as the Teyuan Garden, the Zhougongguan (Zhou Mansion) and the Guiyuan Garden.

Chongqing, a temporary wartime capital during the War of Resistance Against Japanese Aggression (1931-45), gathered political, military, economic, cultural and educational elites and resources, becoming the command center of the fight against fascism in the East.

Located on No 65 in Zhongshansi Road, the Guiyuan Garden is the former residence of general Zhang Zhizhong, head of the political department of the Kuomintang government. It got its name because Zhang planted two sweet-scented Osmanthus trees (pronounced gui in Chinese) in the garden when he moved in 1939.

During the Chongqing Negotiations between the Kuomintang and the Communist Party of China in August 1945, Zhang invited Mao Zedong to use the private villa. Mao and Zhou Enlai used the place to work, rest and receive visitors during the day.

More importantly, it was where the Double Tenth Agreement (the minutes of the talks between the Kuomintang government and representatives of the CPC) was signed.

The garden covers an area of more than 700 square meters, in which stands a two-story brick-and-wood main building－with a reception room and a dining room on the first floor and rooms on the second floor for work and rest for Mao, Zhou and their guards. On Oct 10, 1945, the Double Tenth Agreement was signed in the reception room.

The Chongqing Negotiations, 43 days of top-level negotiations between the CPC and the KMT, was an important political event at a crucial moment when China faced a choice between war and peace after the victory in the War of Resistance Against Japanese Aggression.

It was the first time the CPC officially entered the international political stage and gained worldwide recognition.

The garden was opened to the public in 1977. 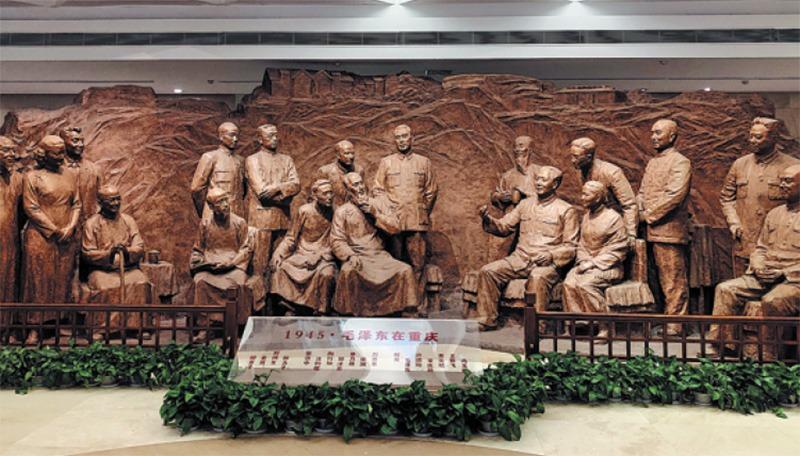 The Chinese Democratic Parties' History Exhibition Hall in the Teyuan Garden features sculptures of revolutionaries in the center of the lobby. (TAN YINGZI / CHINA DAILY)

About 300 meters away from the Guiyuan Garden, the Teyuan Garden is located in No 35 Jialingqiao East Village at the end of Zhongshansi Road.

The Chinese Democratic Parties' History Exhibition Hall in the Teyuan Garden tells the story of how the Communist Party of China forged close partnerships with other political parties to build a better future for the people.

The hall was built on a section of the Teyuan Garden, the residence of Xian Ying, one of the founders of the China Democratic League, which served as a popular political meeting place in China's temporary wartime capital.

A large sculpture in the center of the lobby, titled Mao Zedong in Chongqing 1945, vividly recreates a scene where Mao, Zhou, leaders of other political parties and celebrities gathered and discussed national affairs.

The garden is made up of two connected three-story buildings which were built on a hillside. It covers an area of about 2,000 square meters with a total of 36 rooms. The three-story, gray-brick Daguan Building is the main building, with gardens both in the front and at the back, as well as some auxiliary structures.

The Teyuan Garden, known as the "home of democracy", served as an important place for the Southern Bureau of the CPC Central Committee to carry out its united front work in Chongqing. During the Chongqing Negotiations, Mao met over 100 people in order to unite all possible social forces and establish a wider united front for China's peaceful development.

In May 2008, the Chinese Democratic Parties' History Exhibition Hall was built based in the Kangzhuang residence, a part of the Teyuan Garden.

In March 2011, the hall was opened to the public after rebuilding and expanding.

The site, with exhibition halls on four floors, covers an area of more than 12,000 square meters and houses more than 3,000 historical pictures, 1,200 artifacts and 1,000 other exhibits.

As the first exhibition hall in the country themed around China's democratic parties, the museum exhibits the history of eight of them and comprehensively displays the formation and development of the system of multiparty cooperation and political consultation under the leadership of the CPC.