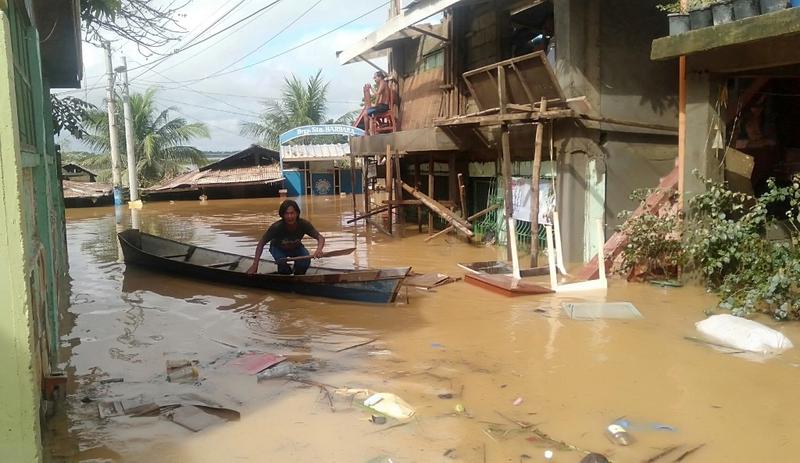 A resident paddles a wooden boat around houses surrounded by floodwaters in the town of Ilagan in Isabela province, north of Manila on Nov 14, 2020, two days after Typhoon Vamco hit parts of the country bringing heavy rains and flooding. (BILL VISAYA / AFP)

MANILA - Philippine authorities moved thousands of residents of the capital, Manila, out of their low-lying communities on Saturday as heavy monsoon rain, compounded by a tropical storm, flooded the city and nearby provinces.

The national disaster agency said 14,023 people, most of them from a flood-prone Manila suburb, had moved into evacuation centers.

"We ask residents of affected areas to remain alert and vigilant, take precautionary measures, and cooperate with their respective local authorities," presidential spokesperson Harry Roque said in a statement.

Harsh weather has hit several parts of the world in recent weeks, bringing floods to China, India and Western Europe and heat waves to North America, raising new fears about the impact of climate change

Harsh weather has hit several parts of the world in recent weeks, bringing floods to China, India and Western Europe and heat waves to North America, raising new fears about the impact of climate change.

The Philippines, a Southeast Asian archipelago of more than 7,600 islands, sees about 20 tropical storms a year but a warmer Pacific Ocean will make storms more powerful and bring heavier rain, meteorologists say.

In some parts of the Philippine capital region, urban sprawl of more than 13 million people, flood waters, in places waist-deep, cut off roads to light vehicles.

The Philippines is also grappling with one of the worst outbreaks of COVID-19 in Asia, and has tightened curbs to prevent the spread of the more infectious Delta variant. read more

Roque said the public works ministry was busy clearing debris and landslides from roads in the provinces.

"Some houses were flooded up to the roof," Humerlito Dolor, governor of Oriental Mindoro province south of the capital, told DZMM radio station.