Death toll from year's deadliest typhoon in Philippines climbs to 67 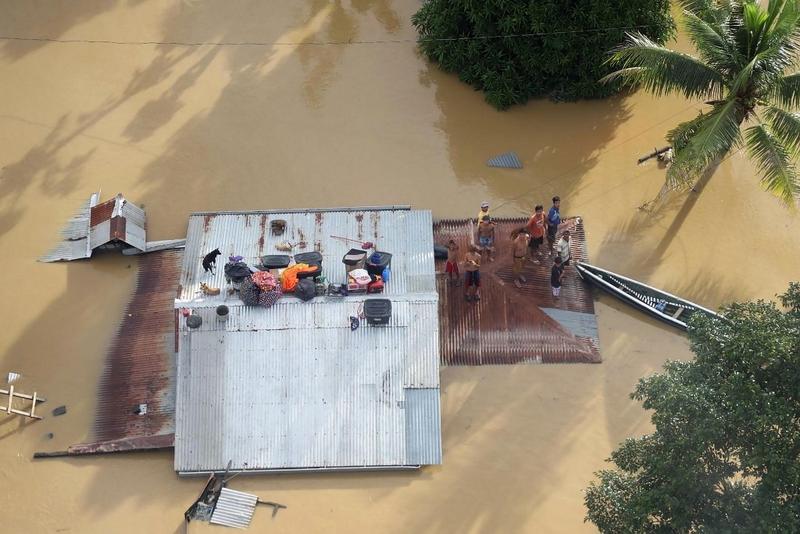 This handout aerial photo taken and received on November 14, 2020 from the Philippine Coast Guard shows residents sheltering on the roof of their flooded house in Cagayan province, north of Manila, on November 14, 2020, days after Typhoon Vamco hit parts of the country bringing heavy rain and flooding.(HANDOUT / PHILIPPINE COAST GUARD  / AFP)

MANILA - The death toll from the deadliest cyclone to hit the Philippines this year has climbed to 67, with 12 people still missing, the national disaster management agency said on Sunday.

President Rodrigo Duterte was scheduled to fly to the northern Tuguegarao province later in the day to assess the situation in Cagayan Valley region, which was heavily flooded after Typhoon Vamco dumped rain over swathes of the main Luzon island, including the capital, metropolitan Manila.

President Rodrigo Duterte was scheduled to fly to the northern Tuguegarao province later in the day to assess the situation in Cagayan Valley region, which was heavily flooded

Twenty-one people were injured, he said.

Many areas in Cagayan, a rice- and corn-producing region of 1.2 million people, remained submerged as of Sunday, according to media reports.

Heavy flooding, caused by the accumulated effects of previous weather disturbances, as well as water from a dam and higher plains affected thousands of families, some of whom had fled to rooftops to escape two-storey high floods.

The damage to agricultural commodities due to floods was initially pegged at 1.2 billion pesos (US$25 million), while infrastructure damage was estimated at 470 million pesos, Timbal said.

Relief and rescue operations continued while the nearby Magat Dam was still releasing water, two days after releasing a volume equivalent to two Olympic-size pools per second, based on government data.

Vamco, the 21st cyclone to hit the Philippines this year, tore through Luzon late on Wednesday and caused the worst flooding in years in parts of the capital.

It followed Super Typhoon Goni, the world’s most powerful storm this year, which brought heavy rain to southern Luzon provinces and killed scores of people just a few days earlier.