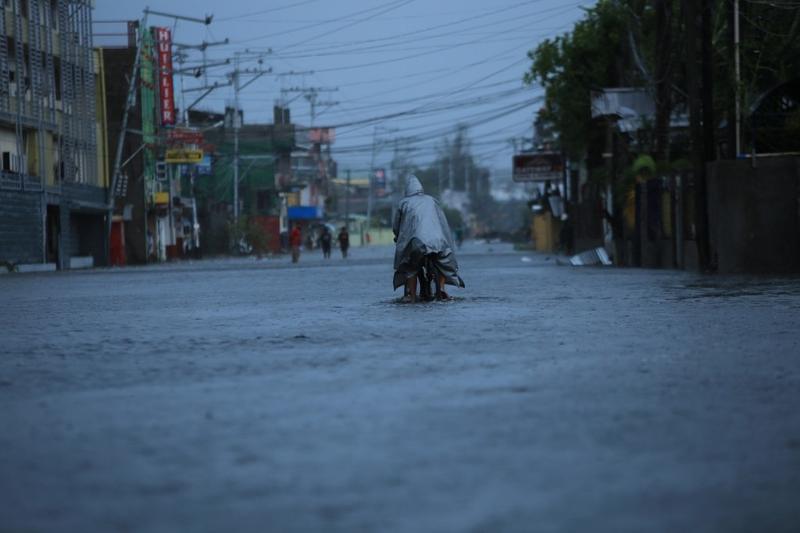 The world’s strongest storm this year killed at least four people and forced about 350,000 to flee their homes as it slammed into the eastern part of the  Philippines early Sunday.

Super Typhoon Goni brought “catastrophic violent winds” when it made landfall over Catanduanes province before dawn Sunday, before weakening as it crossed the main island of Luzon. It’s expected to be closest to the Philippine capital region late Sunday before exiting land the following day.

Super Typhoon Goni brought “catastrophic violent winds” when it made landfall over Catanduanes province before dawn Sunday, before weakening as it crossed the main island of Luzon

“Goni is the strongest landfalling tropical cyclone” in history, said Jeff Masters, a meteorologist with Yale Climate Connections and co-founder of Weather Underground. The previous record was held by Super Typhoons Meranti and Haiyan, which hit the Philippines in 2016 and 2013 respectively.

Goni’s maximum sustained winds have weakened to 175 kilometers an hour, while gusts slowed to 240 kilometers per hour after the typhoon’s third landfall in Quezon province at midday, down from 310 kilometers earlier Sunday, the Philippine weather bureau said in its latest report. Dozens of areas, including Metro Manila, have been placed under storm alert.

There have been 347,000 people evacuated, according to Ricardo Jalad, executive director of the Philippines’ disaster risk-monitoring agency. Between 19 million to 31 million people could be affected by the storm, based on the population count in areas within its path, according to Mark Timbal, a spokesman at the Philippines’ disaster risk-monitoring agency.

Health Secretary Francisco Duque asked people to observe social-distancing measures in evacuation centers to prevent the spread of COVID-19. After Indonesia, the Philippines has the highest number of coronavirus infections in Southeast Asia.

“The pandemic has made this much more complex, but we have been preparing for this situation,” Richard Gordon, a senator and chairman for Philippine Red Cross, said in a statement.

Albay province Governor Al Francis Bichara said his office has accounted four deaths so far - three, including a four-year-old child, died from swollen river, and one was pinned by a fallen tree. Fierce wind ripped off the roof of an evacuation center, he added.

A male resident of Guinobatan town said a river in his town overflowed and caused flooding in nearby areas, "At the height of flood, it was 16 feet deep. Other areas fared worse," he said.

"We have not gone out yet and we expect the damage is much worse," he added.

The storm also felled power lines in Quezon, where at least one person is missing, and damage to crops could reach one billion pesos (US$21 million), said provincial Governor Danilo Suarez.

The cyclone comes days after Typhoon Molave lashed the Southeast Asian nation, leaving at least 22 dead and causing a minimum of 1.8 billion pesos of damage to crops, before heading to Vietnam. Goni is following a similar route. 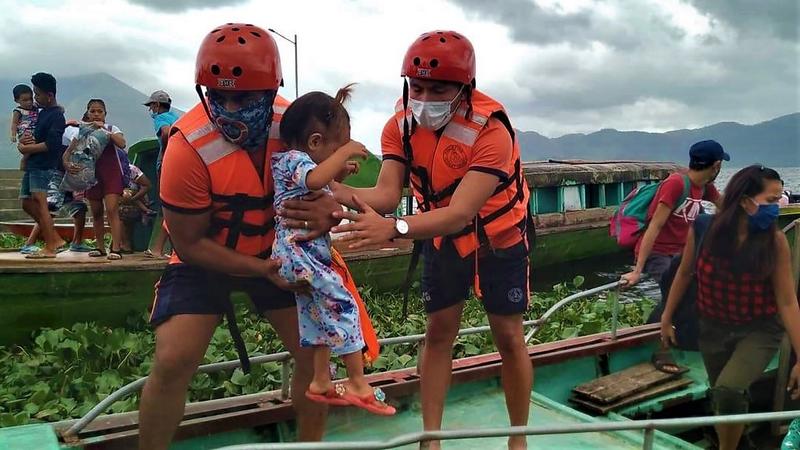 A handout photo taken on October 31, 2020 from the Facebook page of Philippine Coast Guard, shows personnels from the coast guard evacuating residents from the coastal villages of Buhi town, Camarines Sur province, south of Manila, to a safer place, ahead of Typhoon Goni's landfall. (PHILIPPINE COAST GUARD / AFP)

An average of 20 cyclones pass through disaster-prone Philippines every year, which will likely complicate the nation’s fight against the coronavirus as hundreds of thousands of people are evacuated from typhoon-hit areas. In 2013, Haiyan struck the Southeast Asian nation and killed more than 6,300 people.

Coconut, rice and corn plantations may suffer severe losses. Typhoon Goni could damage more than 928,000 hectares of land planted with rice and 58,431 hectares of corn, the Department of Agriculture estimates.

The storm can have a “high humanitarian impact,” the Global Disaster Alert and Coordination System said on its website, adding that nearly 50 million people are at risk.

Another typhoon, Atsani, entered the Philippines on Sunday afternoon, the weather bureau said.

Located in the Pacific Ring of Fire, the Philippines is among the most disaster-prone countries in the world, including active volcanoes, frequent earthquakes, and an average of 20 typhoons a year, causing floods and landslides.

The Philippines lost 463 billion pesos (US$ 9.56 billion) in damages to natural disasters from 2010 to 2019, according to the Philippine Statistics Authority.