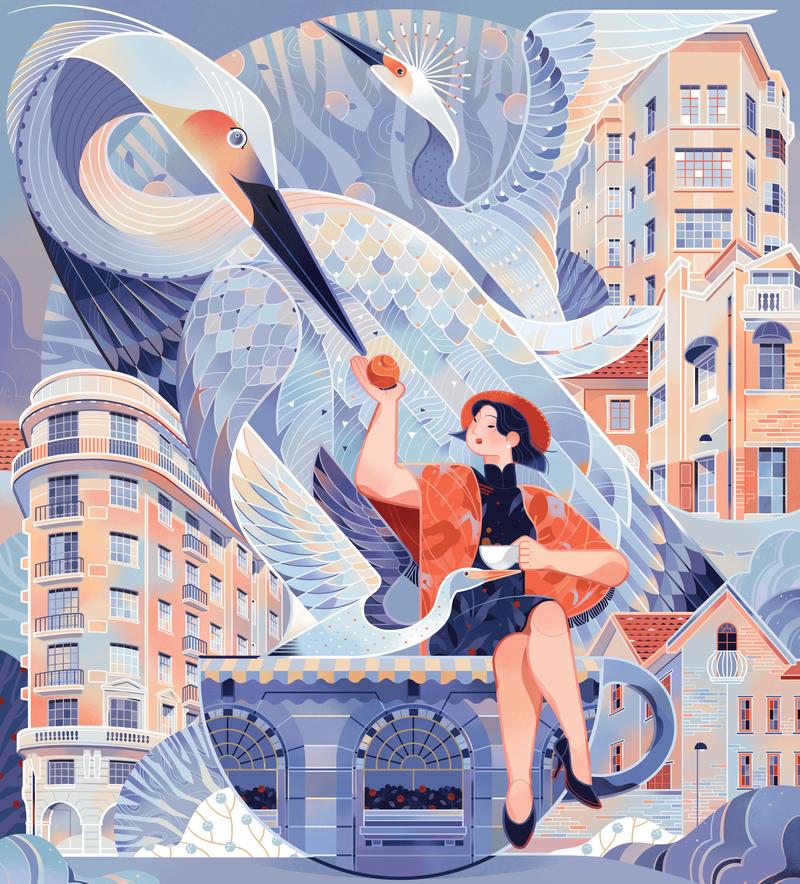 One of the most popular destinations in Shanghai is arguably Wukang Road, a 1-kilometer-long, century-old artery in the downtown area.

Running north from a landmark building at the Huaihai Middle Road junction, Wukang Road, which boasts more than 30 historic villas,

modern shops and cafes, is lined on both sides by tall phoenix trees and attracts some 40,000 visitors a day.

During the Dragon Boat Festival last month, it welcomed more than 424,000 visitors.

Zhou Mi, a Shanghai restaurant owner who moved her business to Wukang Road in 2018, said: “I love this place because it incorporates the best of the city’s history and how it looks today. I can find lots to do here and have never felt bored since I arrived in the area.”

With her husband, John Christensen, who is also involved in the dining business, Zhou launched their first restaurant in the Wukang Road area in 2006 and gradually expanded the business. The couple now runs 10 restaurants in the area.

Having lived and worked close to Wukang Road for nearly 16 years, Zhou has witnessed many changes during that time.

In 2005, when the couple moved to the area, Wukang Road was quiet and had comparatively few visitors. In the past two or three years, the number of visitors has risen significantly, giving the road the appearance of a pedestrian-only street during holidays, Zhou said.

“The specialized shops, restaurants, coffee shops and many well-known stores have transformed the street from a quiet residential area into a trendy and popular attraction,” she added.

Internet celebrities dressed in fashionable attire take videos on Wukang Road, while young people out with their pet dogs eat brunch with friends on weekends. Middle-aged women wearing colorful qipaos take photos in front of the historic villas, mingling with local residents who have lived in the area for dozens of years.

So, what has made the road the center of attention? History provides some of the answers.

Built in 1907, Wukang Road was originally named Ferguson Road after the United States missionary and educator John Calvin Ferguson, according to place name records for Shanghai’s Xuhui district. It was renamed Wukang Road in 1943.

In 1914, the road was included in the French Concession, a community where foreigners, celebrities and wealthy people settled and built homes in Spanish or French Renaissance styles.

More than 50 ancient buildings, including the Capetown Apartment site and the writer Ba Jin’s former home, are located on Wukang Road.

The area has been well preserved by the city government and is listed as a top-level preservation zone. The heights of buildings along Wukang Road and the architectural style are regulated to retain the original appearance.

Among the buildings, Wukang Mansion rises like the bow of a huge ship and sits at the south end of the road, forming a 30-degree apex at the junction with Huahai Middle Road. It has become a landmark feature of Wukang Road, if not of the entire city.

Built in 1924, the structure was designed by Hungarian-Slovak architect Laszlo Hudec. According to local officials, it was designed as an apartment building for white-collar workers who were single.

The eight-story building with two elevators was one of the city’s earliest modern residential high-rises for upper-class expatriates. Later, prominent Chinese figures in politics, culture and the arts moved in.

In 1994, the structure, home to about 140 households, was listed as a city-level historical building.

Qi Yingzhu, 61, a resident of the building, said it was convenient to live there, as a wet market, convenience stores and a barbershop were within walking distance.

Wukang Mansion, which is adorned with attractive red bricks on its exterior, is a must-visit site and has frequently appeared on social media platforms. 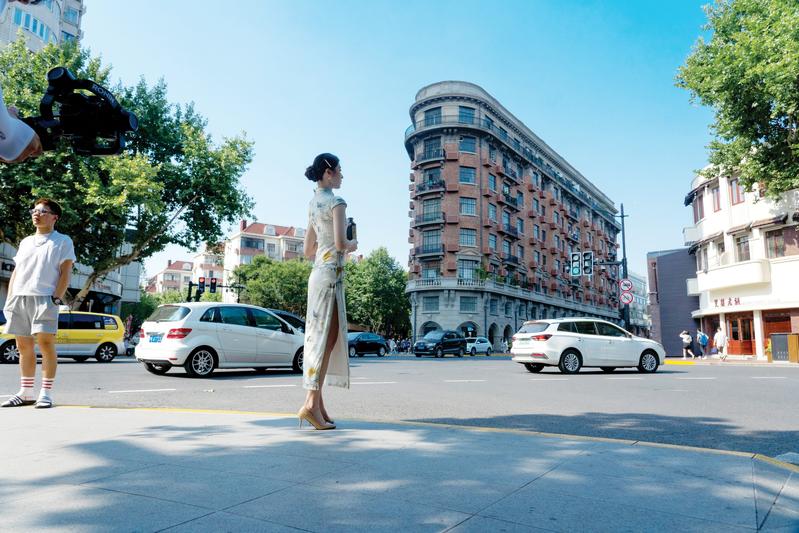 Wukang Mansion rises like the bow of a huge ship at the junction of Wukang Road and Huaihai Middle Road, Shanghai. The structure attracts some 40,000 visitors a day. (GAO ERQIANG / CHINA DAILY)

In 2017, it underwent a comprehensive renovation as part of the city’s efforts to improve the quality of life for residents living in old buildings and to upgrade the historic neighborhood’s environment.

Bai Zufang, Party head of the Hunan Neighborhood Committee, where the building is located, said, “The environment in the area improved after the renovation, changes to the traffic flow system in 2017 and reconstruction work on the building in 2019.”

Chen Zhongwei, manager of the design company responsible for the renovation, said: “After consulting a wealth of historical material, we concluded that Wukang Mansion’s most illustrious period was when it had just been built. Therefore, we made every effort to retain its original appearance, leaving no trace of our repair work.”

Bai said: “We invited residents to discussions with the designers, which included selecting the clothes drying area after clothes racks were removed from the building’s windows. We also added a garden on the second floor for residents to grow flowers and exercise.”

To further improve the area, plans were drawn up to relocate underground the numerous wires and cables above the road junction.

After the renovation, more people visited the area to take selfies in front of the building.

Retail businesses on Wukang Road have also changed over the years, with the aim of prompting visitors to spend more time in the area, Bai said, adding, “There are more places to visit now”.

Zhou, the restaurant owner, said, “The decent environment, local lifestyle and customers with taste, along with other features, attracted us to stay here and open Lokal, a catering business that is part of the Wagas group, on Wukang Road in 2018.”

The outlet’s French-style courtyard, brunch and coffee quickly attracted groups of young people, who sometimes have to wait in line for entry during weekends.

“The creative atmosphere on Wukang Road attracts many trendy people and makes it more personalized. Sitting on the street during the weekend, you see numerous stylish people,” Zhou said.

Guo Ruiqi, regional manager of Lokal, said turnover from January to May rose by 35 percent over the same period in 2019, with the business catering to more than 600 diners on peak days.

Jerome Tauvron, a French chef who opened a restaurant on Wukang Road, said it is not just the food that attracts visitors to the area.

“The road is always linked with Ba Jin and other literary scholars and also designers such as Hudec, helping to create a romantic atmosphere. The history and culture of this scenic area gave me the inspiration to create artistic meals,” he added.

Wukang Road is not the only attractive neighborhood in the city, with several interesting destinations now drawing crowds of young people.

Columbia Circle, a compound in Changning district that used to be home to US expatriates, is now a multifunctional complex with offices, stores, a bookshop, restaurants and cafes.

At the fourth Shanghai Urban Space Art Season, which starts on Sept 25, artists will be invited to design public works that meet people’s daily needs, according to Jin Lei, deputy director of the Shanghai Municipal Bureau of Culture and Tourism. The bureau has also encouraged districts to turn areas in schools, shopping malls, parks, subway stations and other neighborhood sites into exhibition halls for art shows.

Suzhou Creek is another example of an attractive area. Long pedestrian paths along the banks of the waterway were completed by the end of last year, giving residents more space for leisure activities.

At a recent meeting, the city’s urban planner said it understood that the charm of a metropolis is not only based on physical facilities but also on “inner spirit and attraction” or the “soft power”.

According to the plenary meeting of the Shanghai Municipal Committee of the Communist Party of China on June 22, the city led the nation in conducting research to improve its soft power, with the aim of enhancing Shanghai’s value in all respects to build a better society in the new era.

According to Li Qiang, Shanghai’s Party chief, many aspects of hard power in the city meet top-level requirements among major destinations worldwide, including development of its economy, finance, trade, transportation and scientific innovation. However, there is still room for Shanghai to improve its soft power.

“In our view, urban soft power is mainly about an intangible strength guided and formed by value, culture and systems,” Li said.

The meeting decided that Shanghai would develop more original cultural products and protect its historic culture, while also striving to create a comfortable environment for living, working, studying and travel.

“It is not enough for a metropolis to boast of its hard power — a city’s soft power, which includes the living environment, quality of life, administration and culture, is extremely important,” Xiong said.

“Shanghai has done much exploration of its urban soft power construction and has implemented some good practices, but they are relatively fragmented,” he added.

“The city now has a comprehensive plan which will unify good experiences and practices. This is an important upgrade of the urban development concept.”