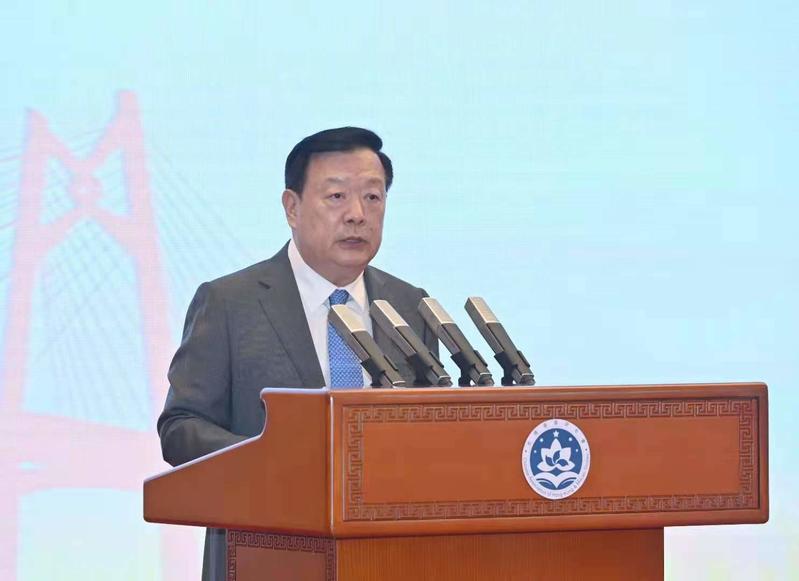 BEIJING - The Law on Safeguarding National Security in the Hong Kong Special Administrative Region (HKSAR) has proved to be a legislation that ensures Hong Kong's security, stability and tranquility, a senior Chinese official on Hong Kong affairs said Friday.

Addressing a high-level symposium marking the first anniversary of the enactment of the law, Xia Baolong, vice-chairman of the National Committee of the Chinese People's Political Consultative Conference and head of the Hong Kong and Macao Affairs Office of the State Council, said the law's promulgation and enforcement have reversed the chaos in Hong Kong at one stroke, serving as a major milestone in the implementation of "one country, two systems."

"The law has filled a long-existing vacuum with regard to safeguarding national security in Hong Kong and crushed the 'color revolution' plot of the Hong Kong version," Xia said.

The law has filled a long-existing vacuum with regard to safeguarding national security in Hong Kong and crushed the 'color revolution' plot of the Hong Kong version.

Xia Baolong, head of the Hong Kong and Macao Affairs Office of the State Council

Xia said that the law had dealt a severe blow to the anti-China troublemakers in the city and helped to restore the dignity of rule of law in Hong Kong.

Hong Kong's economy and financial sector remain strong, and the lies about Hong Kong's pessimism have been dispelled, he said. International investors have been reassured by the National Security Law and the city's status as a financial center has not been tarnished at all, he added.

READ MORE: US, EU politicians warned not to meddle in China's affairs

Facts have shown that only by building a solid security foundation of "one country" can the "two systems" enjoy greater vitality and space, the well-being and interests of Hong Kong residents be effectively safeguarded, and the prosperity, stability and lasting peace of Hong Kong be ensured, Xia said.

Xia said that the confidence of Hong Kong society in "one country, two systems" has increased and the city has gained a more comprehensive and accurate understanding of it since the law took effect a year ago.

According to a poll, 71.9 percent of the respondents expressed increased confidence in the prospect of "one country, two systems."

At the symposium, Xia underlined the importance of a speech by Xi Jinping, general secretary of the Communist Party of China (CPC) Central Committee, at the CPC centenary ceremony. In the speech, Xi underscored the central government's overall jurisdiction over Hong Kong and Macao special administrative regions (SAR). He reiterated the firm position to fully and faithfully implement the "one country, two systems" principle in the two SARs and highlighted implementing the legal systems and enforcement mechanisms for them.

Xia said Xi's important remarks are of profound significance for the steady and sustained implementation of "one country, two systems" under new circumstances, and for maintaining lasting prosperity and stability in Hong Kong and Macao.

Xia noted that the National Security Law will ensure a bright future for the special administrative region, which has an important role to play as the nation propels ahead to achieve its great rejuvenation

The HKSAR has been unswervingly fulfilling its constitutional duty to safeguard national security and spared no effort to build an "iron wall" for national security. Being enforced vigorously, the National Security Law has worked as a safeguard for Hong Kong's prosperity and stability, he said.

Xia noted that the National Security Law will ensure a bright future for the special administrative region, which has an important role to play as the nation propels ahead to achieve its great rejuvenation.

"Imagine what progress the 'one country, two systems' will achieve in Hong Kong when our country realizes the second centenary goal?" Xia said, pointing out that the region is expected to be a more prosperous economy, achieving greater progress in democracy with better protection of residents' rights and freedom.

He added that a mainstream value featuring the love for the country and for Hong Kong is expected to take root in people's hearts by then, with the principle of "patriots administering Hong Kong" fully implemented.

In addition to its current position as an international financial, trade and shipping center, Hong Kong is also expected to gain further appeal and become a more dynamic modern metropolis where elements from the East and the West blend in harmony.

Xia, at the symposium, stressed the faithful implementation of the principle of "patriots administering Hong Kong," saying that anti-China forces who seek to destabilize Hong Kong must be resolutely excluded from the administrative structure of HKSAR.

To implement the principle of "patriots administering Hong Kong," efforts must be made to ensure smooth operation of the upcoming elections of the Election Committee, the Legislative Council and the chief executive of the HKSAR, and to ensure the power of the HKSAR is in the hands of people who love China and Hong Kong, Xia said.

At the symposium, Xia called for efforts to elect staunch patriots with a high caliber of administrative capabilities

"Anti-China disruptors must never be allowed to make their way into the SAR's administrative structure and become an administrator by any means. This is an iron rule that also applies to the Macao SAR," Xia said. Any possible loopholes in this regard should be plugged with strict scrutiny throughout the electoral process, he added.

He also called for efforts to elect staunch patriots with a high caliber of administrative capabilities.

Such personnel should be competent in fully and accurately practicing "one country, two systems" in Hong Kong, solving tensions and problems facing the region's development, serving the public with practical actions, rallying and uniting all sectors for the development of Hong Kong, and working diligently with a sense of responsibility, Xia noted.

Experts and scholars attending the symposium commended the progress made since the enactment of the National Security Law, calling for continuous efforts to enforce, study and promote the law. They also called for further implementing "patriots administering Hong Kong," and ensuring the steady and sustained implementation of "one country, two systems."

The symposium was organized by the Chinese Association of Hong Kong and Macao Studies. Among the more than 300 people attending the symposium are chief officials of related central authorities and relevant officials from the two SAR governments including HKSAR Chief Executive Carrie Lam Cheng Yuet-ngor and Macao SAR Chief Executive Ho Iat-seng. Some public figures, experts and scholars from the mainland, the HKSAR and the Macao SAR also attended the event, with participants in the two SARS attending via video link.