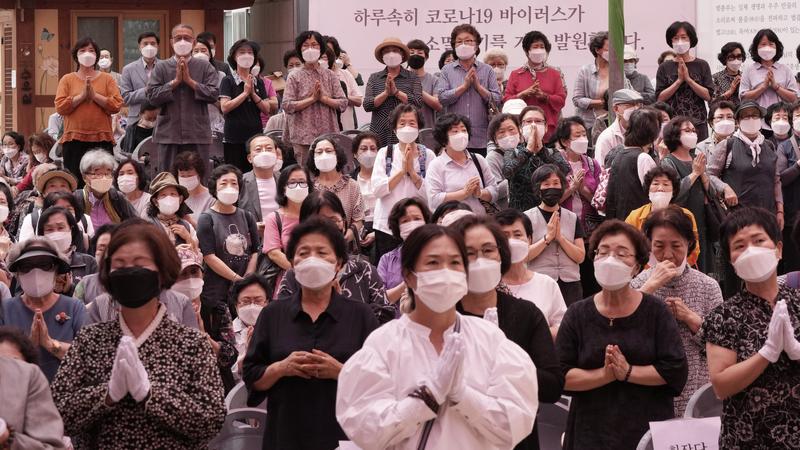 People wearing face masks to help protect against the spread of the coronavirus pray during a service to mark Dano, a Korean traditional holiday that falls on the fifth day of the fifth month of the lunar calendar, at the Jogye temple in Seoul, South Korea, June 14, 2021. (AHN YOUNG-JOON / AP)

The country will increase the maximum number of people who can gather privately from July 1, Prime Minister Kim Boo-kyum said Sunday in a televised briefing. Under revised rules, shops will be able to stay open for longer, depending on daily caseloads, he said.

The number of daily infections has declined in recent weeks in South Korea while vaccinations are picking up. More than 15 million people - about 30 percent of the population - have received at least one shot and the government is confident that herd immunity may be achieved earlier than initially expected.

South Korea reported 429 more cases of COVID-19 as of midnight Saturday compared to 24 hours ago, raising the total number of infections to 151,149.

The daily caseload was down from 482 in the prior day, staying below 500 for two days due to fewer virus tests on the weekend. The daily average caseload for the past week was 468.

The daily number of infections hovered in triple figures since Nov 8 last year due to small cluster infections in Seoul and its surrounding Gyeonggi province as well as imported cases.

Australia's state of Queensland recorded one locally acquired coronavirus infection on Sunday, the latest streak of small outbreaks that have been plaguing the country in recent months.

The Queensland case comes as a cluster of the highly infectious Delta variant has grown by two cases to nine in New South Wales, Australia's most populous state, prompting health officials to expand mask wearing rules.

Australia has been highly successful in managing the spread of the coronavirus through swift border closures, social distancing rules and a high community compliance with them, reporting just over 30,300 cases and 910 COVID-19 deaths.

But the country has struggled with the vaccination rollout, and states have been plagued in recent months by small outbreaks, kept from spreading out of control through speedy contact tracing, isolation of thousands of people at a time, or snap hard lockdowns.

The state of Victoria, which battled a small outbreak of the Delta variant, which was first detected in India, earlier this month and which put five million people into a hard lockdown for two weeks, recorded no new cases on Sunday, following one infection in the previous day.

South Australia on Sunday joined Queensland in imposing a ban on travellers who have been in the affected east suburbs of Sydney in New South Wales.

According to government data, only about 4 percent of Australia's adult population of 20 million have been fully vaccinated, while about 25 percent have had at least their first dose.

The Philippines plans to speed up COVID-19 vaccinations and start inoculating its youth later this year after signing its biggest supply deal yet with Pfizer Inc and BioNTech SE, the government’s vaccine czar Carlito Galvez said.

The country also has a commitment from COVAX for 44 million doses, while a further 16 million from Novavax Inc. and Johnson & Johnson are still under negotiation, according to Galvez. As of June 18, the government had administered a little more than 8 million doses and targets ramping up the daily inoculation rate to 500,000 by the third quarter and at least 740,000 by the last three months of 2021 from a high of about 323,000 on June 15.

The Philippines' Department of Health (DOH) reported on Sunday 5,803 new COVID-19 infections, bringing the total number of confirmed cases in the Southeast Asian country to 1,359,015.

The death toll climbed to 23,621 after 84 more patients died from the viral disease, the DOH said.

Indonesia is facing a sharp spike in COVID-19 cases one month after the Eid al-Fitr holiday with the detection of the more contagious Delta variant, as over 12,000 daily cases were reported for three consecutive days.

Windhu Purnomo, an epidemiologist at the Airlangga University in East Java, said the increase in social activities, a lack of compliance to health protocols as well as limited contact tracing were blamed for the spike in cases.

The densely-populated capital Jakarta on Saturday recorded additional 4,895 COVID-19 cases in 24 hours, the highest number during the pandemic. Currently, 89 percent of the 8,924 special beds for COVID-19 patients have been occupied.

Myanmar recorded the highest spike of  COVID-19 cases in recent months with 546 new infections in the past 24 hours, bringing the case tally to 147,615, according to a statement from the Health and Sports Ministry on Saturday.

Seven more deaths were reported, bringing the death toll to 3,258, the statement said.

The daily COVID-19 cases increased to around 100 since late May and the ministry has recently imposed the stay-at-home order in eight townships with high infection rate to curb the spread of the disease.

Bangladesh resumed administering the first dose of COVID-19 vaccine in parts of the country on Saturday thanks to the China-donated Sinopharm vaccines.

Those who already registered but have not received their first shots will get priority for vaccination, which resumed in 67 centers across the country, a notice issued by the country's health directorate said.

Bangladesh suspended administering the first dose of the vaccine on April 26 after India halted export due to a supply crunch. Subsequently, the country's drug regulator authorized emergency use of China's Sinopharm vaccines.

Health Ministry Director-General Noor Hisham Abdullah said in a press statement that one of the new cases is imported and 5,910 are local transmissions.

Another 72 more deaths have been reported, bringing the death toll to 4,348.

A total of 1,384 new COVID-19 cases were reported in Afghanistan over the past 24 hours, taking the total number of patients infected with the disease to 101,906 in the country, a statement of the Public Health Ministry said on Saturday.

According to the statement, 92 patients died due to the viral disease over the period, raising the number of COVID-19-related deaths to 4,122 since the outbreak of novel coronavirus in February 2020.

The pandemic has so far claimed 82,854 lives in Iran, up by 108 in the past 24 hours, the Iranian Ministry of Health and Medical Education reported.

According to Brunei's Ministry of Health, case 254 is a 36-year-old man and case 255 is a 45-year-old man. They arrived in the country from Indonesia on June 6 and have no symptoms of infection.

Vietnam reported 486 new COVID-19 cases on Saturday, including 471 locally transmitted and 15 imported, raising the total tally to 12,900, according to the country's Ministry of Health.

Most of them are contacts of previously confirmed cases or linked to the clusters of infections in the localities.

The ministry also said on Saturday that two more COVID-19 patients have died, taking the death toll in the country to 64.

There are seven imported cases, who have already been placed on Stay-Home Notice (SHN) upon arrival in Singapore.

Israeli Ministry of Health said on Saturday in a statement that Friday's COVID-19 vaccines shipment to the Palestinian Authority was "totally normal."

The statement came in response to the Palestinian announcement that it has quitted the agreement reached with Israel and Pfizer company on exchanging anti-coronavirus vaccines with Israel.

Under the agreement, Israel was to deliver to the West Bank 1 million to 1.4 million doses of vaccine that are about to expire, 100,000 of which were already transferred to the West Bank on Friday.

In exchange, Israel was supposed to regain the same amount of vaccines from Palestinian Authority during September-October.

However, after the first shipment was delivered, the Palestinian government announced its quit from the agreement, explaining that its health ministry's specialists found out the vaccines received from Israel did not match the specifications.

In response, the Israeli health ministry said in the statement that the Palestinian ministry had received fine Pfizer vaccines, with expiry dates that were known, agreed upon, and consistent with the agreement.

The Israeli Ministry of Health on Saturday reported a COVID-19 outbreak in two schools in the town of Binyamina, 60 km north of Tel Aviv.

The outbreak concerns a primary school and a middle school, where 45 students in total were tested positive for the coronavirus, according to the ministry.

An extensive testing operation, which began after one of the middle school students had been tested positive, revealed the outbreak.

According to the ministry, the source of the outbreak is related to a family who recently returned from abroad, with the infection of the COVID-19 variant first detected in India.

Turkey has started to administer vaccines to its citizens aged 30 and above, Koca tweeted.

Turkey on Saturday confirmed 5,480 new COVID-19 cases, including 494 symptomatic patients, raising the total number in the country to 5,365,208, according to the health ministry.

Mongolia reported 2,400 new locally transmitted COVID-19 cases in the last 24 hours after 10,425 tests had been conducted across the country, raising the national caseload to 93,551, the health ministry said on Sunday.

Eleven more fatalities were reported in the past day, bringing the national death toll to 450, the ministry said in a statement, adding that 641 more patients have recovered, taking the total number of recoveries to 63,113.

Cambodia Sunday reported 659 new COVID-19 cases, bringing the national caseload to 42,711 so far, the Ministry of Health (MoH) said in a statement.

Seventeen more fatalities had been recorded, taking the overall death toll to 431, according to the ministry.

The four new cases were recent returnees in managed isolation facilities since the Ministry's last update on Friday, it is said.

There was no new case of COVID-19 to report in the wider New Zealand community, said the Ministry.