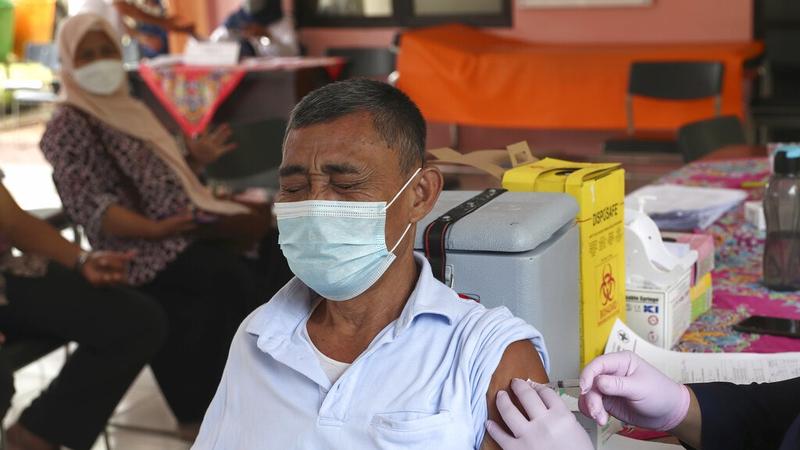 A man receives a shot of the AstraZeneca vaccine during a mass coronavirus vaccination in Jakarta, Indonesia on June 9, 2021. (TATAN SYUFLANA / AP)

The Indonesian Health Ministry on Thursday recorded the highest daily hike in the COVID-19 cases of 8,892 infections since late February.

The daily increase in the COVID-19 cases in Indonesia on Saturday was recorded at 7,465, bringing the total cases to 1,901,490 since March 2020 when the first case was detected.

President Joko Widodo asked for the acceleration of the mass vaccinations in Indonesia to meet the target of 700,000 shots per day in June and 1,000,000 injections in a day by July in his social media account on Wednesday.

He has also called on regional heads, including governors and district heads to carry out mass vaccinations in their respective areas to meet the national target.

Previously, Minister of Health Budi Gunadi Sadikin set up a target of vaccinating 1 million people every day starting in June. The target was then adjusted with the gradual arrival of vaccines. A total of 426 million doses of vaccines are estimated to arrive, including 90 million doses arrived during the period of January to June, and the rest would come in July to December, the minister said.

Thailand’s outbreak epicenter of Bangkok will allow some aesthetics-related businesses to reopen after its worst wave of infections improved and more people are vaccinated.

“After a careful consideration, the relaxation can go ahead as planned,” he said. “The outbreak situation is now at a controllable level and residents of Bangkok, especially those in these businesses, have already received vaccinations.”

Prayuth last month overturned Bangkok’s plan to relax restrictions on June 1 and ordered an extension of the closures until June 14 as the capital struggled to contain the virus spread.

Bangkok remains the virus hotspot of Thailand’s current outbreak, accounting for about a third of new infections since the resurgence in early April and with new clusters still being detected. But authorities have been ramping up vaccinations for the city’s residents, with 1.6 million shots administered, enough for nearly 10 percent of its population, compared to about 4 percent nationwide.

South Korea will exempt some traveltraers who have received their COVID-19 vaccine shots overseas from its mandatory two-week quarantine starting July 1, health authorities said on Sunday.

As of May 5, the quarantine exemption was only applicable to people fully vaccinated in South Korea.

The new policy will apply only to certain people, such as citizens and foreign residents, as well as those coming to visit family, or for the purpose of business, academics or public interest, said Son Young-rae, an official with the Central Disaster Management Headquarters.

Exempt travellers will need to fill out an application, and still need to be tested before and after arriving in South Korea. Some travellers from countries with major outbreaks or variants will not be allowed to skip the quarantine, he added.

Saudi Arabia announced on Saturday at a press conference to limit the upcoming Hajj season to domestic pilgrims only of a maximum of 60,000 individuals.

The Ministry of Hajj and Umrah decided to limit the availability of registration for those wishing to perform the Hajj rituals this year to citizens and residents inside the country only, due to the global COVID-19 outbreaks and the new virus mutations.

This year, vaccinated and recovered citizens and residents of the age group 18-65 who do not have chronic diseases would be allowed to register to perform Hajj.

The upcoming Hajj will be the second season with no overseas pilgrims due to concerns of the pandemic.

Palestinian Minister of Health Mai al-Kaila announced on Saturday that Palestine has recently witnessed a collective recovery from COVID-19.

"The West Bank and the Gaza Strip witnessed a decline in the (daily) positive cases and fatalities," al-Kaila told state radio Voice of Palestine.

Meanwhile, al-Kaila said about 30 percent of the Palestinians in the West Bank and the Gaza Strip have been vaccinated.

The Palestinian Health Ministry reported on Saturday 183 new COVID-19 cases, including 10 in the West Bank and 173 in the Gaza Strip, while the death toll from the infectious disease rose by two to 3,798.

Lebanon's health ministry launched on Saturday a marathon day for the third consecutive week for COVID-19 vaccination for people aged 55 and above, the National News Agency reported.

According to the ministry, more than 19,000 people were vaccinated on Saturday and the vaccination will continue on Sunday.

Lebanon reported 148 new COVID-19 cases on Saturday, raising the total number in the country to 542,523, while the death toll from the infectious disease increased by four to 7,794.

Cambodia Sunday reported 468 new COVID-19 cases, including 437 local infections and 31 imported, taking the national caseload to 38,427, the Ministry of Health (MoH) said in a statement.

Health Ministry Director-General Noor Hisham Abdullah said in a press statement that six of the new cases are imported and 5,787 are local transmissions.

Another 76 more deaths have been reported, bringing the death toll to 3,844.

About 88 percent of basic education schools have reopened in Myanmar's regions and states since June 1, spokesperson of the State Administration Council told a press conference on Saturday.

As many as 42,080 out of over 47,000 schools in the country reopened and over 3.2 million students attended the schools as of June 10, Major General Zaw Min Tun said.

Schools and educational institutions had to shut down again across the country due to the increased number of COVID-19 infections after reopening for a while in late August 2020.

Myanmar reported two new COVID-19 deaths, bringing the death toll to 3,241 on Saturday, according to a release from the Health and Sports Ministry.

The pandemic has so far claimed 81,911 lives in Iran, up by 115 in the past 24 hours, the Iranian Ministry of Health and Medical Education reported.

Vietnam has approved the COVID-19 vaccine jointly made by Pfizer and BioNTech for domestic emergency use, the government said on Saturday.

It is the fourth vaccine to be endorsed in the Southeast Asian country that is tackling a new outbreak.

Vietnam, which has previously approved the AstraZeneca vaccine, Russia's Sputnik V and China's Sinopharm vaccine, said it is seeking to procure 31 million doses of the Pfizer/BioNTech version for delivery in the next quarter.

Vietnam is trying to accelerate its vaccine procurement drive to tackle a more stubborn wave of infections, even though its overall case load and fatality numbers remain relatively low.

The health ministry also said on Saturday it was in talks with an unidentified US manufacturer to producer a one-dose vaccine with a view to producing 100 million-200 million shots per year.

Vietnam reported 261 new COVID-19 cases on Saturday, including 259 locally transmitted and two imported, bringing the total tally to 10,241, according to the country's Ministry of Health.

Among the community cases, 246 were reported in quarantine facilities or lockdown areas. In terms of localities, 125 were detected in the northern epidemic hotspot Bac Giang province, 84 in the southern Ho Chi Minh City, and 34 in the northern Bac Ninh province.

According to the ministry, 5,292 more people were discharged from hospitals, bringing the total number of recovered patients to 1,740,436.

Brunei reported one new confirmed case of COVID-19 on Saturday, bringing the national tally to 249.

According to Brunei's Ministry of Health, Case 249 is a 33-year-old woman who arrived in the country from Indonesia on May 30. She has experienced a cough symptom for one day on June 11.

Investigation and contact tracing have confirmed no close contacts for the new case, as she was quarantined upon arrival in the country.

All of the local cases are in the community. Among them, four were linked to previous cases.

This was the sixth consecutive day when less than 100,000 cases were registered across the country, after peaking to over 400,000 for several days in April-May which was dubbed as the pandemic's second wave.

New Zealand reported four new cases of COVID-19 on Sunday, said the Ministry of Health in a statement.

The new cases of COVID-19 reported were recent returnees in managed isolation facilities, since last update on Friday, while there was no new case of COVID-19 to report in the wider New Zealand community, said the ministry.

The latest infection was a close contact of a previously reported case and had already been quarantined, Victoria's health department said.

Australia's second-most-populous state has recorded 92 cases in its latest wave of COVID-19 infections, which triggered a two-week snap lockdown late last month. Victoria emerged from the lockdown on Friday as new cases declined, but some physical distancing rules remain.

Merlino added he was keen to get people back to attending sporting events and theatre, though he had no announcement to make yet in that regard.

Under existing curbs, Melbourne residents can only travel up to 25 kilometres from home while outdoor gatherings are limited to 10 people. Masks are required indoors and outdoors at all public spaces.

More than 3,000 primary close contacts of infected cases are already in quarantine with about 122 exposure sites listed on the Victorian government website.

Australia has fared much better than many other developed countries during the pandemic, with more than 22,300 local COVID-19 cases and 910 deaths since March 2020, mostly in Victorian aged-care homes.

Mongolia reported 2,188 new COVID-19 cases in the last 24 hours, the first time that the country hit the 2,000 threshold on a daily basis, the health ministry said Sunday.

The latest confirmed cases, which were all locally transmitted, brought the national tally to 76,084, said the ministry in a statement.

The Philippines' Department of Health (DOH) reported on Sunday 7,302 new COVID-19 infections, bringing the total number of confirmed cases in the Southeast Asian country to 1,315,639.

The death toll climbed to 22,788 after 137 more patients died from the viral disease, the DOH said.