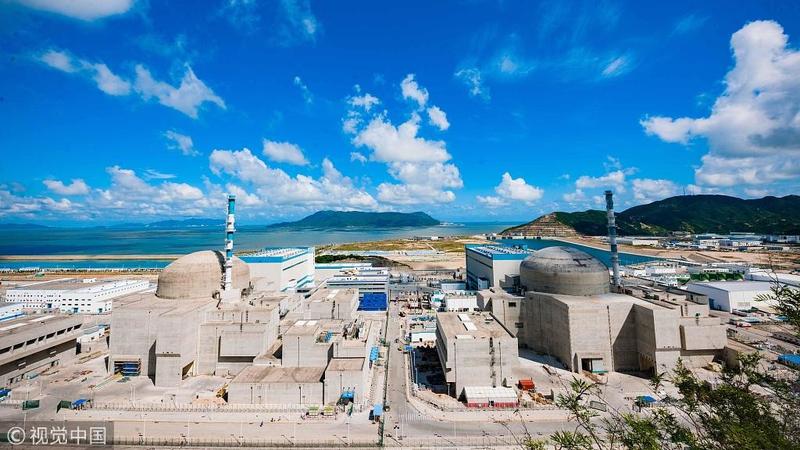 The Taishan Nuclear Power Plant in Taishan, Guangdong province, is operating safely and within standards and no abnormalities have been found in the surrounding environment, the Ministry of Ecology and Environment said on Wednesday.

Some premises in an earlier Cable News Network report about the plant's operation were wrong, the ministry said in a statement.

Although the amount of radioactivity per unit volume or weight of coolant in the plant's No 1 reactor's primary circuit rose, it still met technical standards as it was within the range required by operating technical specifications that allows the plant to operate stably, it said.

Damaged fuel rods caused the increased level of radioactivity inside the primary circuit. However, a small amount of fuel rod damage during operation is inevitable and a common phenomenon due to uncontrollable factors during fuel manufacturing, transportation and loading, said the Ministry of Ecology and Environment

"The operational safety of the nuclear power plant is guaranteed," the ministry said.

The increase of radioactivity in the reactor's primary circuit was totally different from an accidental radioactive leak, and monitoring of the environment around the plant showed that the radiation level was normal and no leak had happened, it said.

The containment vessel and the pressure boundary of the coolant system-two protective screens that guard against leaks-are safe and no accident is about to happen despite the increase, the ministry said.

Damaged fuel rods caused the increased level of radioactivity inside the primary circuit. However, a small amount of fuel rod damage during operation is inevitable and a common phenomenon due to uncontrollable factors during fuel manufacturing, transportation and loading, it said.

"Many nuclear power plants around the world have experienced fuel rod damage but continued operation," the ministry said.

The housings of about five of the more than 60,000 fuel rods in the No 1 reactor are estimated to have been damaged, accounting for less than 0.01 percent of the total number, far lower than the assumed maximum damage proportion of 0.25 percent in the design for the reactor, it said.

The CNN report was not correct when it said that the National Nuclear Safety Administration had approved raising the limit on the acceptable amount of radiation detected outside the plant to avoid its shutdown.

"The administration has never approved that, instead, it reviewed and approved adjustment of limits on the amount of radioactivity per unit volume or weight of noble gases in the reactor's primary circuit," the ministry said.

"This limit is used for operation management and has nothing to do with radiation detection outside the nuclear power plant.

"The premise in the CNN report is wrong."

The ministry added it will closely monitor the radiation level of the No 1 reactor and strengthen on-site supervision and environmental monitoring.

It will guide and supervise the operating companies to follow the operating technical specifications and strictly control the reactor's radiation level to ensure its safety.

It will also keep communicating with the International Atomic Energy Agency and the French nuclear safety regulatory authorities.

The Taishan Nuclear Power Plant, a Sino-French joint venture, has two nuclear power reactors, designed by Framatome, a French company. They were put into commercial operation in 2018 and 2019.

They have since been running safely and stably, with nothing abnormal detected in the surrounding environment, the ministry said.

In a news release on Monday, Framatome said that according to available data, the plant is operating within safety parameters.