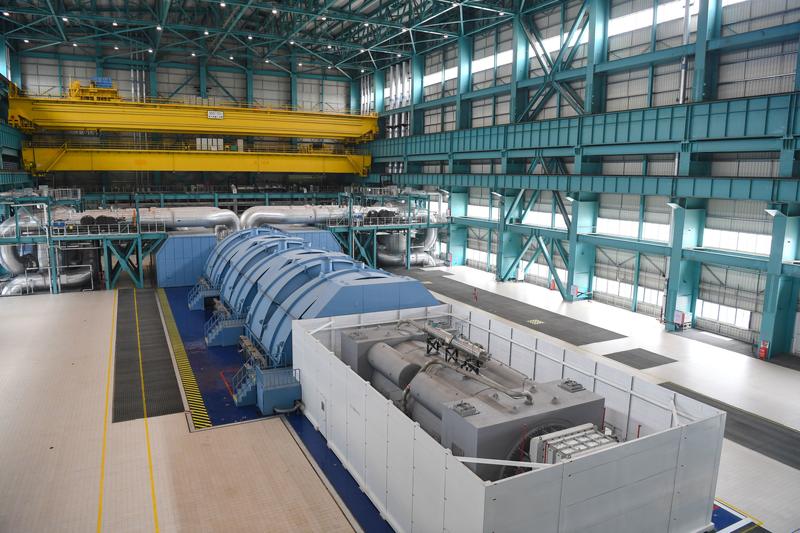 This photo taken on Dec 20, 2018 shows the building of steam turbine at the No. 1 unit of the Taishan Nuclear Power Plant in south China's Guangdong province. (DENG HUA / XINHUA)

BEIJING - No abnormalities or radiation leaks have been detected in the vicinity of the Taishan nuclear power plant in south China's Guangdong province, the country's environment authorities said Wednesday.

The Ministry of Ecology and Environment made the remarks in response to recent CNN reports on the situation concerning the plant. The ministry said that the two French-designed nuclear power units at the plant have been operating in a safe and stable manner.

The Ministry of Ecology and Environment said there has been an increase in the coolant radioactivity level of the primary circuit in the No.1 unit due to fuel rod damage, but the radioactivity level is still within technical limits. The ministry assured that the safe operation of the plant is guaranteed

Fully put into commercial use in 2019, the Taishan plant is run by a joint venture set up by China General Nuclear Power Corporation, French energy supplier Electricite de France (EDF), and Guangdong Energy Group Co., Ltd., with each unit supporting a capacity of 1.75 million kilowatts.

The ministry said there has been an increase in the coolant radioactivity level of the primary circuit in the No.1 unit due to fuel rod damage, which is a common phenomenon at nuclear plants.

The radioactivity level is still within technical limits, the ministry said, assuring that the safe operation of the plant is guaranteed.

About five out of the more than 60,000 fuel rods at the No.1 unit, or less than 0.01 percent of the total, might have been damaged, which is far below the designed maximum ratio of 0.25 percent, according to the ministry.

There has been no leak as environment monitoring shows that the radiation level around the Taishan plant is normal, the ministry said, refuting CNN's reports.

The ministry also denied CNN's claims that the country's nuclear safety regulator had approved raising the limit of radiation detection around the Taishan plant to keep the units running.

The National Nuclear Safety Administration (NNSA) has only approved the radioactivity limits concerning certain noble gases within the nuclear power units, which is only for operation management, not radiation detection outside the plant, the ministry said.

The NNSA will continue to closely monitor the radiation level within the No.1 unit and have the plant ensure its operational safety. Meanwhile, it will keep in touch with the International Atomic Energy Agency and French nuclear safety regulator.