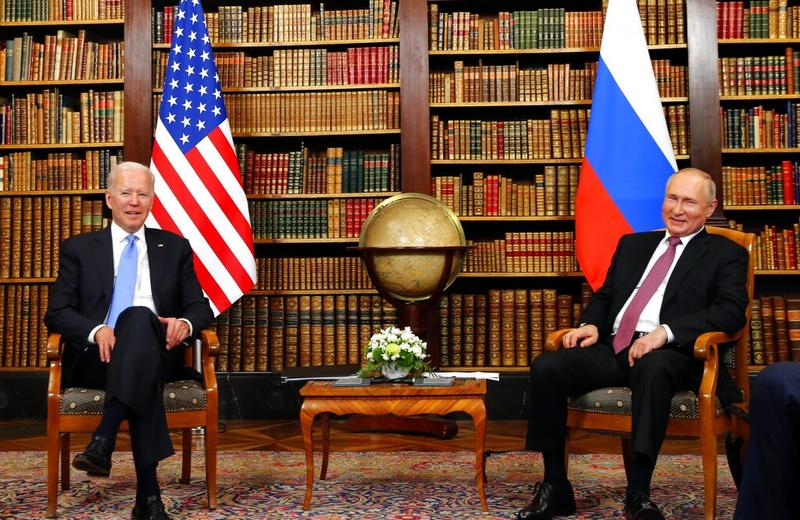 Presidents Joe Biden and Vladimir Putin started a summit in the Swiss city of Geneva in an effort to dial back tensions between the two former Cold War adversaries that have reached the highest level in years.

The meeting with Putin, the first of Biden’s presidency, may last for more than four hours including talks with a broader group. Both Russian and US officials are keeping expectations low for the outcome, with the leaders looking to agree on a new round of arms-control negotiations and restoring diplomatic links severed in recent years.

“I think it’s always better to meet face-to-face,” Biden told Putin, who thanked the US leader for taking the initiative to hold the session. “I hope our meeting will be productive,” the Russian leader said

“I think it’s always better to meet face-to-face,” Biden told Putin, who thanked the US leader for taking the initiative to hold the session. “I hope our meeting will be productive,” the Russian leader said.

Putin thanked Biden for taking the initiative to propose the session. “I know you’ve had a long trip, a lot of work. Nonetheless, a lot of questions have accumulated in Russian-American relations that require discussion at the highest level and I hope our meeting will be productive,” he said.

Biden and Putin began speaking before US reporters had entered the bookshelf-lined room where they began their meeting at the Villa La Grange in Geneva, and both men smiled as journalists scuffled with one another and with Putin’s security as they tried to cover the remarks. The scrum drowned out some of the leaders’ comments.

Legendary for keeping people waiting, Putin arrived for Wednesday’s talks on schedule. He and Biden will first meet accompanied by their top diplomats, Sergei Lavrov and Antony Blinken. A larger meeting with more staff will follow. The initial face-to-face encounter of the two presidents will last as long as they want, Putin’s spokesman Dmitry Peskov told state television Wednesday.

They are expected to discuss a renewal of the New START nuclear arms pact that is set to expire in 2026, according to White House officials who briefed reporters traveling with Biden on Tuesday.

The two leaders aren’t planning to share a meal. Ahead of the meeting, Biden dined Tuesday evening in Geneva with Blinken and National Security Advisor Jake Sullivan.

The two men last met in 2011, when Biden was vice president and Putin had not yet cemented his grip on power in Russia.

“I’m looking at this meeting with practical, but not much, optimism,” Putin foreign policy aide Yuri Ushakov told reporters this week. “This is the first meeting under such strained conditions that have developed in bilateral relations, and I think that both sides understand they need to clean up the rubble.”

They plan to hold separate news conferences after the summit rather than appearing on stage together, as Putin and former president Donald Trump did in Helsinki in 2018 -- a strong indication of how little expectation there is for any kind of breakthrough in the relationship.

Trump’s joint news conference with Putin in 2018 led to a US embarrassment after he said he accepted the Russian leader’s word that he hadn’t interfered in the 2016 election, dismissing the conclusion of US intelligence agencies. US politicians in both parties excoriated Trump for the incident, which was seen as a major victory for Putin.

Biden has fended off criticism that he’s rewarding Putin by proposing a meeting so early in his presidency, with aides arguing the relationship is best managed face-to-face due to the Russian leader’s singular authority in his country. Nonetheless, the summit also represents a win for Putin, as it shows that however grudgingly, the Kremlin remains a priority for the new US president.

The summit with Putin was purposefully scheduled to follow Biden’s meetings with Group of Seven nations in the UK as well as NATO and EU leaders in Brussels, where the US president said he consulted allies on his agenda for the Russian leader. All of them, Biden said, thanked him for planning the Geneva meeting.