This photo released by the China National Space Administration on June 11, 2021 shows a Chinese national flag and a monochromic drawing of the mascots of the Beijing 2022 Winter Olympics and Paralympic Winter Games hanging on the landing platform. (PHOTO / CHINA NATIONAL SPACE ADMINISTRATION)

The images were unveiled at a ceremony in Beijing marking a complete success of China's first mars exploration mission.

The images include a panorama of landing site, the Martian landscape and a selfie of the rover with the landing platform.

The images show the nearby area was relatively flat and scattered with light-colored, partially-buried rocks of various sizes and with smooth surface edges

A fabric Chinese national flag and a monochromic drawing of mascots of the Beijing 2022 Winter Olympics and Paralympic Winter Games are noticeable in the landing platform's picture. Also in this photo, the tracks of Zhurong on the surface can be clearly seen.

The group photo of Zhurong and the landing platform was created by a small camera, which was originally attached to the rover's bottom and then placed on the Martian soil when the rover travelled about 10 meters to the south of its landing platform. 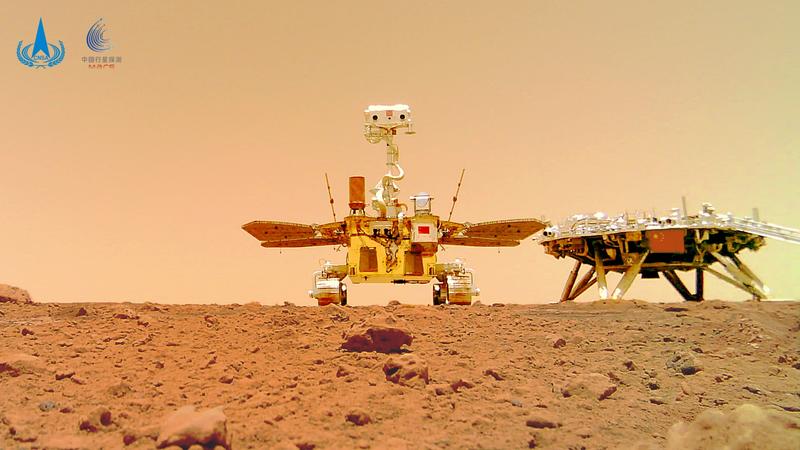 After dropping the camera, Zhurong moved back toward the platform. The process was recorded by the camera, which transmitted the video and pictures to the rover via radio signal.

The 360-degree panorama of the landing area was photographed when the rover had not yet left the landing platform. It was stitched together from a number of images that the rover's navigation camera captured, showing the flat surrounding area of the landing site and the Mars horizon in the distance.

The backdrop in these photos is the reddish, barren Martian land, on which Tianwen 1's landing capsule touched down on May 15, on the southern part of the Utopia Planitia, a large lava plain within the largest known impact basin in the solar system.

The images show the nearby area was relatively flat and scattered with light-colored, partially-buried rocks of various sizes and with smooth surface edges. On the far side was a circular crater with dark-colored, sharp rocks spreading around the rim. Several dunes were lying even farther.

The density and size of rocks were within expectation, indicating the probe's autonomous landing, hovering and obstacle avoidance went well, said the CNSA. 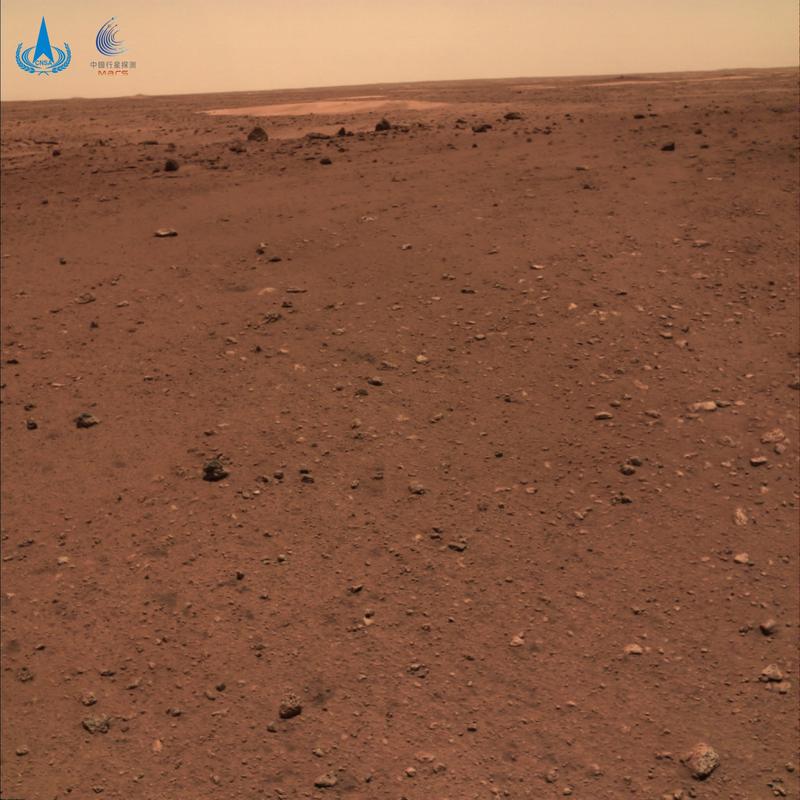 This photo released by the China National Space Administration on June 11, 2021 shows a view of the Martian landscape as taken by China's Mars rover, Zhurong. (PHOTO / CHINA NATIONAL SPACE ADMINISTRATION)

Zhang Kejian, director of the CNSA, said at the ceremony that China will share scientific findings from its space missions with other nations to benefit all people around the world.

As of Friday, Zhurong has been working on the Red Planet for 28 Martian days to carry out scientific exploration.

The robot is now hundreds of million kilometers from the Earth. It is the sixth rover on Mars, following five others launched by the United States.

With an expected lifespan of at least 90 Martian days, the 240-kilogram Zhurong is tasked with surveying Mars' landforms, geological structures, soil characteristics, potential locations of water and ice, and atmospheric and environmental traits, as well as magnetic, gravitational and other physical fields.

The 1.85-meter-tall robot is propelled by six wheels and powered by four solar panels, and can move at 200 meters an hour on the Martian surface.

Tianwen 1, named after an ancient Chinese poem, was launched by a Long March 5 heavy-lift carrier rocket on July 23 from the Wenchang Space Launch Center in the southernmost island province of Hainan, kick-starting China's first mission to another planet.

Driven by a mixture of 48 large and small engines, the spacecraft rocketed more than 470 million km and carried out four midcourse corrections and a deep-space trajectory maneuver before entering the orbit of Mars on Feb 10.

On Feb 24, Tianwen 1 entered a preset parking orbit above Mars and maintained that orbit to examine the predetermined landing site until May 15, when it descended to a lower orbit to release the landing capsule, which touched down on the Red Planet after a succession of sophisticated maneuvers.